In this week's column, we explore two disparate forms of team-building that were on display over the weekend.

There were two distinct auras surrounding two very different games last week. The Orlando Magic and Philadelphia 76ers met up in Philly for a 126-125 double-overtime thriller on Tuesday. Two days later, the New York Knicks blew out the drowning Brooklyn Nets at Barclays Center. Most casual fans watched Brooklyn-New York--TNT broadcasted it nationally and the game featured two lustrous teams in one of the country's most populous metropolises--but Orlando-Philadelphia was the better game and, in a vacuum, a sneak peek at two teams highly, and smartly, invested in the future.

A dark, cold, proverbial tarp covered the Barclays Center on Thursday night. The architects of both teams, in different ways, designed them to win now and at any cost. But as of December 5th, they were a combined 9-27 and the two worst teams in the Atlantic Division, the worst in basketball. In other words: the Atlantic is a swimming pool of mediocrity where winning 40 percent of your games means you're in first place, and yet Brooklyn and New York sat at the bottom, anchored by bad contracts and poor management. 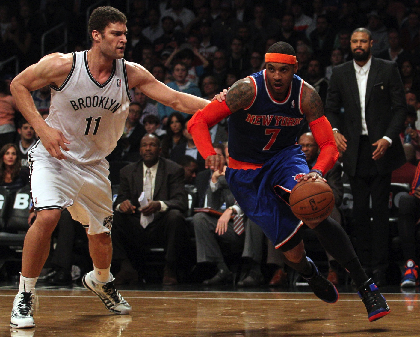 Nets coach Jason Kidd "reassigned" assistant coach Lawrence Frank, the most expensive assistant coach in NBA history, just hours before Thursday's tipoff. Brooklyn scored just 83 points against a team that started Andrea Bargnani at center. Brook Lopez scored 24, Joe Johnson managed 13 of his own and nobody else on the roster scored in double figures.

Through 20 games--with a 6-14 record--the Nets rock-bottomed to a place where only few have gone: where all a $50 million starting lineup and a mortgaged future--via unprotected draft picks to the Boston Celtics--bought was unrealistic expectations; aging, battered bones; and a rookie head coach in way over his head. Where glossy, gold-covered contracts and tabloid-grabbing transactions have formed the league's worst defense and an offense too old to facilitate.

The Knicks' shortcomings are just as bright as the lights in the city in which they reside. James Dolan, the Knicks' owner, is more interested in prolonging his music career than providing a stable basketball environment to one of the NBA's most passionate fan bases. The Knicks let go of the sharpshooting Steve Novak and a first round draft pick for Bargnani. They let Chris Copeland, a solid shooter on a cheap contract, walk in free agency. They have completely abandoned the small-ball formula that drove one of last season's hottest offenses.

Draft picks are the building blocks of franchises. The Knicks do not own one in 2014--the year that most teams are banking on as a loaded draft class. But, still, the Knicks have actually set themselves up for the future. In 2015/16 they are set to only owe $12.7 million in salary, assuming they pick up Tim Hardaway Jr.'s contract. Will Dolan take the long approach? Probably not, because patience is a virtue which has eluded Dolan for the last decade-and-a-half.

The long approach is one that ownership in Orlando and Philadelphia treasure and it's a blueprint that Rob Hennigan and Sam Hinkie are enacting.

The long approach, however, is one that ownership in Orlando and Philadelphia treasure and it's a blueprint that Rob Hennigan and Sam Hinkie--each team's respective GMs--are enacting. The Magic have set themselves up with long-term cap flexibility and have collected assets in the form of Nikola Vucevic, Moe Harkless, Victor Oladipo, Andrew Nicholson, and the ever-growing Arron Afflalo. They will also have the worse of the Denver Nuggets' and Knicks', ironically, draft pick in 2014, giving them two first-round picks in a loaded draft.

Philadelphia is no different. The looked mired in the middle of the East until Hinkie overhauled the roster by trading Jrue Holiday, an All-Star point guard, for Nerlens Noel and a protected 2014 first-round pick. He then grabbed Michael Carter-Williams with the 11th pick in the 2013 draft and the Sixers rebuild was well on its way. Thus far, Carter-Williams looks like a steal--averaging 17 points, six rebounds and seven assists--and the Sixers are off to a 7-14 start. 7-14 doesn't sound great, but this was a team characterized in the preseason as Thaddeus Young, Spencer Hawes, Evan Turner, and D-League players.

That's why the Magic-Sixers game of last week so fascinating: Victor Oladipo calmly ran the offense in Jameer Nelson's absence, carefully picking his spots, turning the ball over just three times in 52 minutes, and recording his first career triple-double; Carter-Williams put on a show, recording a triple-double of his own. He scored 10 points and dished five assists in the fourth quarter and in overtime; Afflalo and Glen Davis racked up 43 and 33 points, respectively; Turner and Young combined for 49 points as Philadelphia's most productive veterans.

It's the NBA: things happen. Orlando and Philadelphia aren't built to win now. On Friday, the Magic lost by 38 points against New York; the Sixers have lost their last two games since beating the Magic. But that's OK, because wins and losses aren't the entire measure for success this season for the two teams in full rebuild mode. For New York and Brooklyn, winning now is everything. With limited draft picks and a mangled salary situation, it's win now or bust.

But looking at the four teams' records, could you tell a difference?