The Magic shot poorly and committed too many turnovers on Friday, falling to a scrappy Celtics squad.

The Orlando Magic ended their four-game homestand Friday with a 91-89 loss to the Boston Celtics. Arron Afflalo scored 23 points to lead all players, but he was one of only three Orlando players to reach double-digits. In contrast, six Celtics scored between 10 and 16 points.

Here's a look at the stories that developed in Friday's Magic loss.

The Magic shot just 39.8 percent for the game and 37.1 percent after the first period, with 16 turnovers. Magic coach Jacque Vaughn credited Boston guard Avery Bradley for disrupting Orlando's offense at the point of attack. 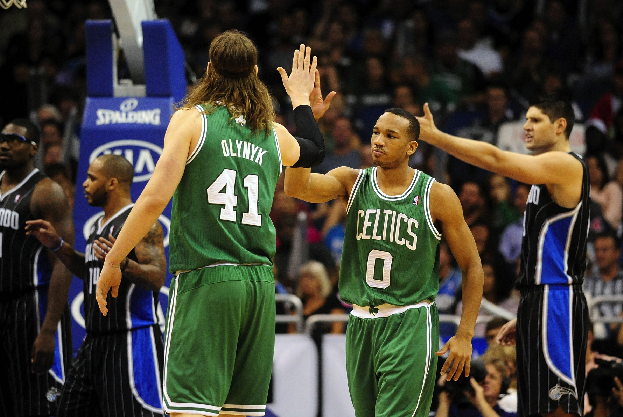 "They have a pretty good defender in Avery Bradley who can extend the defense some and pressure the basketball," Vaughn said. "A couple of times he was able to get into us and disrupt us a little bit."

Bradley made a key play with 5:49 to play in the fourth quarter, poking the ball away from Victor Oladipo in the backcourt and taking the ball the other way with one hard dribble for a dunk and-one chance, which he converted. The three-point play extended Boston's lead to four. The Texas product finished with three steals and a blocked shot on the night.

For his part, Afflalo said Boston "had a general momentum" in the second half, and that the Magic didn't match its "intensity."

Trailing by three and with 10 seconds to play, Orlando had possession with a chance to tie the game. The play they ran out of a timeout nearly worked.

Afflalo inbounded the ball from the left sideline to Vučević, who was posted up at the logo about 18 feet from the basket. Afflalo then ran to the top of the key, only to cut back to the corner across a hard screen from Jason Maxiell, who wiped out Courtney Lee, Afflalo's defender. Vučević pitched the ball back to Afflalo as he cut. Gerald Wallace switched from Maxiell to Afflalo and used a hard closeout to force Afflalo to take an escape dribble to his left, deeper into the corner. Afflalo pulled up just inside the arc, fading to his left as he fired in order to avoid Wallace's second contest. He sank the shot, but it only brought the home team within a point with four seconds to play.

"Good look [and] good execution down the stretch," Vaughn said, adding that the play was for Afflalo all the way. He was pleased with the shot the play produced, but hoped it'd result in a three-point try instead of a two.

Afflalo was harder on himself than Vaughn seemed to be in his press conference.

[E]ven with four seconds on the clock, you have to be able to slow the game down enough to be conscious of where you are on the court. Arron Afflalo on taking a long two-pointer instead of the triple his team needed

"Not a smart play," Afflalo said. "Obviously, my intent to shoot the initial three coming off [the screen], but even with four seconds on the clock, you have to be able to slow the game down enough to be conscious of where you are on the court. I'm very upset at myself for stepping on the line."

"I wanted to shoot the initial shot, and then I thought--once I had him in the air a little bit--I thought about going for some contact," Afflalo said. "I saw a little room in that corner, and obviously, in the corner, it's really tight over there, so I didn't want to step out of bounds."

After Afflalo's long deuce, Bradley split a pair of free throws to put Boston up two points and giving the Magic possession with three seconds to play. But Orlando didn't have any timeouts, as Afflalo said, forcing Oladipo to heave a final shot just inside midcourt as the final horn sounded.

"To play in this league and be as effective in this league, at the size that he is, tells you, number one, he's really quick and really fast," Stevens said. "Number two is he's got a great mindset and some great stuff about him."

Stevens hopes that Celtics rookie Phil Pressey, listed at 5-foot-11 and 175 pounds, can one day develop into a player of Nelson's caliber. In 16 minutes off the bench Friday, the Missouri product went 0-of-4 from the floor for one point, two rebounds, an assist, and two turnovers.

Honoring those who serve

Friday, the Magic teamed with their season ticketholders and Harris Corporation to donate more than 2000 tickets to that night's game to military personnel and their families. The program is called Seats for Soldiers, and it's now in its 10th season.

In addition to donating tickets, the Magic honored Sergeant Lito Santos, who earned a Purple Heart for an Army tour he served in Iraq in 2005, in a halftime presentation.

Magic guard E'Twaun Moore and Wallace got into the spirit by wearing special blue sweatbands with red trim: Moore on his right wrist, Wallace on his head. Stuff, the Magic's mascot, wore a camouflage jersey and pants in the first half, and then switched into a Captain America-style jersey after intermission.

Stuff does not typically wear pants.