The Magic adhered to a sound defensive gameplan Wednesday, enabling them to knock off another title-contending team.

The Orlando Magic improved to 3-2 on Wednesday with their 98-90 upset of the visiting Los Angeles Clippers. The victory is Orlando's third straight overall and second in a row against teams widely regarded as championship contenders.

Here's an in-depth look at some of the stories that developed Wednesday.

Magic big man Nikola Vučević keyed the victory, scoring 30 points and grabbing 21 rebounds to lead all players. He shot 6-of-6 from the foul line in the fourth quarter to ice the game for Orlando, which squandered a 19-point lead in the third period, only to win it back.

"His aggressiveness on both ends of the floor, I love it," coach Jacque Vaughn said after the game. "He looked over at me and wanted me to call his number. That's a first in our time together and so it's great to see and great to be a part of."

Vučević, who always keeps an even keel, credited Jameer Nelson for helping him succeed.

"All I really have to do is set the screen and roll and he's always able to find me to where all I have to do is turn around and finish," the seven-footer said. He finished one such basket at the 2:38 mark of the fourth quarter to give Orlando a one-point lead.

In his second season with the Magic, Vučević is playing with more assertiveness, though he denied Vaughn's account that he had never called for the ball before. "I just feel more confident right now," Vučević said. That level of confidence extends to his jump shot. Vučević canned a 16-footer off a Nelson feed to put Orlando up by three with 1:04 to play, and showed no hesitation on the play, shooting it as soon as Nelson's pass reached his hands.

Why is it important for him to have that sort of range?

"Obviously, I'm not really gonna go dunk on everybody," Vučević said, "so you gotta have something else. I think it adds to my game and being able to stretch the floor out for other people."

The Clippers entered Wednesday's contest averaging 16 fast-break points per game, 10th in the league, but that figure understates the impact speed has on L.A.'s offense, the league's most efficient by leaps and bounds. Vaughn said before tipoff that getting back in transition and forcing L.A. to play against a set Orlando defense would be key.

"We wanna limit transition," Vaughn said. "If we can do that, we put ourself in position to play five-on-five. We've been pretty decent [at that] this year."

When you have a team that can put up 130 points, it might be wise to have better defensive balance. Jacque Vaughn on defending the Clippers

The Magic, then, needed to find a balance between crashing the offensive glass and getting back in transition to set their defense. "We have to pick which is more important for us," Vaughn said. "Sometimes, from game to game, you have to make decisions that reflect whether you're gonna have offensive boards or defensive balance. When you have a team that can put up 130 points, it might be wise to have better defensive balance."

The Magic finished with just seven offensive rebounds in 43 chances, but also limited L.A. to 15 fast-break baskets, one point below its average.

Orlando's emphasis on getting back in transition first cost them an offensive rebound at the 10:04 mark. After Vučević missed a jumper from the right side, the rebound bounced out hard and to the right, not far from where Vučević attempted the shot. But he had already retreated on defense, and by the time he realized the board was in his area, the Clippers' Blake Griffin had already chased it down.

Most teams, Price said, send their point guard and shooting guard back defensively in transition. Against the Clippers, that calculus changes. "I think with a team like this, you gotta send three [or] four guys back at all times," Price said. "With that kind of mindset, you can prevent a lot of fast-break points."

Nelson said after the game that Orlando's transition defense was "pretty good."

"We could have limited [them] a little more, but like I said, you can't take everything away," the veteran point guard said.

Vaughn made a defensive adjustment before Wednesday's game by cross-matching the defensive assignments of Nelson and Arron Afflalo. Nelson picked up L.A. shooting guard J.J. Redick--a teammate of his for seven seasons in Orlando--while Afflalo picked up Clippers All-Star point guard Chris Paul. 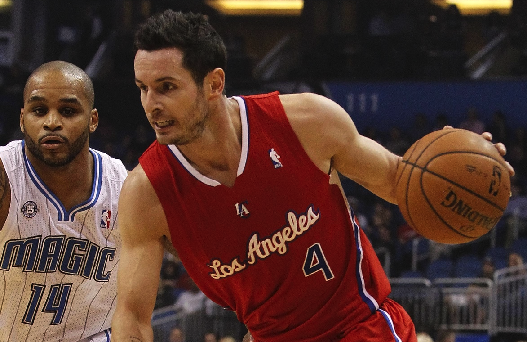 "We just wanted a little more size on Chris at the end of the day," Vaughn said in his post-game meeting with the media. "Jameer is very comfortable and familiar with J.J.'s game, and we just wanted him focused on chasing J.J. for the majority of the night."

Afflalo elaborated on the gameplan.

"The idea was hopefully to keep the ball in Chris Paul's weak hand and kinda allow Blake [Griffin] and DeAndre [Jordan] to have that space there at 15- to 18-feet. Blake had it goin' there for a little bit but it worked to our advantage at the end of the game."

Paul tallied a game-best 10 assists, but shot just 8-of-19 from the floor for an inefficient 18 points. Afflalo said that the Magic's goal was to keep Paul in "playmaker mode," a task at which any observer of Wednesday's game would have to say Orlando excelled. Apart from giving Paul five pull-up jumpers at the left elbow--"there's not much I can do about getting hit by screens," Afflalo said of those shots--the MVP candidate did not make much of an impact as a scorer.

Redick finished with an average line for him--17 points on 46.7 percent shooting--but Nelson was pleased with the work he did defending his former teammate.

"It's tough guarding a guy like J.J. who can shoot the ball so well," Nelson said. "You have to be disciplined. He hit a couple shots [in the third quarter] but I stuck with the gameplan. I thought we did that overall as a group."

Magic vs. Clippers: Another tough test for Orlando