In the season's first week, the Magic defy the odds

Orlando could have let its first two losses steer the course for the rest of the season, but it didn't. Its fans are better for it.

Share All sharing options for: In the season's first week, the Magic defy the odds

Rooting for a bad team is a dangerous task. Covering a bad team is even more dangerous. There's a reason that daily beat writers become snarky, satirical brutes over years of writing about league bottom-dwellers. Those beat writers -- and even the pessimistic die-hard fans -- are constantly in danger of succumbing to bad-basketball-watching insanity. The missed execution, the dribbling off one's foot, the forgotten tasks and failed assignments can drive sport watchers mad. They drive fans mad. There's a reason bad teams consistently have poor attendance. Who wants to pay for an inferior product? Who wants to root for a team fated to lose?

In four games, the Orlando Magic have provided neither an inferior product nor a team fated to lose.

This was one of the dangers facing Orlando heading into the team's second season without Dwight Howard. Orlando isn't a team stocked with bad players, but it does have guys capable of putting out a flawed product. It's the reason most experts project the men in pinstripes to finish with such a bad record. There's no shame in being "bad" as long as there's direction, and Orlando appears to have direction. It doesn't have to be good as long as it is entertaining or as long as the product is worth watching for 82 games.

Last Friday afternoon, there was a banal narrative in place for the team. Orlando had lost its first two games of the season and was coming off a deflating defeat at the hands of Kevin Love, who popped Orlando's momentum with a flick of his wrist. Love's three-point dagger and the consummate ass-kicking that followed in overtime should have been the turning point in the Magic's young season. Orlando, a team with a mix of aging veterans and young guns still searching for their place in the NBA, should have called it quits right then and there as it walked off the floor of the Target Center.

The team was missing its two most productive players from 2012/13 in Tobias Harris and Glen Davis and the alleged greatest draft in a decade looms on the horizon. It would have been convenient for Orlando to call off the dogs and head back to central Florida to drop consecutive home games against teams far more talented.

But that's not what happened.

This Orlando team is scrappy and just confident enough to bounce back from heartbreak.

If Magic fans have anything to celebrate, it's that this Orlando team is scrappy and just confident enough to bounce back from heartbreak.

Against the New Orleans Pelicans, Orlando met a team with a compelling young star in Anthony Davis, a freshly acquired All-Star in Jrue Holiday, and wing players with worlds of potential. The Pelicans, with their mostly feared, eerily creepy new mascot, were pretty obviously the more talented squad. But Orlando faced the challenge, bouncing back from what will be one of the more depleting losses of the season in Minneapolis, head on, holding the Pellies to a fetid 34.8 percent shooting.

New Orleans' core -- aside from Davis, who dominated both on both sides of the ball -- were left disoriented. Holiday, Eric Gordon, and Tyreke Evans combined to shoot 11-of-37 from the floor. Evans, in particular, was completely invisible, scoring zero points in 17 minutes. The stout defense of Victor Oladipo left Holiday, the Pelicans' lone All-Star, in shambles.

Orlando finding the courage to bounce back from the Minnesota loss to beat New Orleans was something, but the Brooklyn Nets game was even more fascinating. In the same night that Orlando defeated the Pelicans, Brooklyn was knocking off the two-time defending champion Miami Heat. The Nets had dropped their first game of the season against the Cleveland Cavaliers, but even that felt more like Cleveland overachieving in its first home game more than Brooklyn losing a winnable game.

This was the Nets. This was Kevin Garnett and Paul Pierce. This was a team with five starters who all make over $10 million a year. This was the team who had beaten Miami twice in the preseason and already once in the regular season. This was supposed to be a reality check for Orlando, the impending blowout the team managed to avoid through three games. 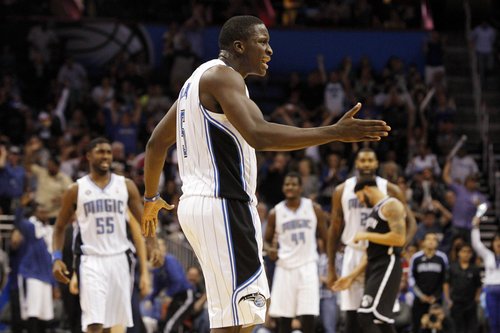 The Magic are 2-2 and look like a competitive team. This practice notebook examines whether Orlando can maintain its momentum.

But the Magic didn't stick to the script. Orlando didn't buy in to the aura of the Nets and their insurmountably more fine-tuned roster.

Arron Afflalo flirted with a triple-double; Maurice Harkless calmly knocked down a pair of three-pointers and played solid defense; Nikola Vučević went toe-to-toe with Brook Lopez; Oladipo went berserk for an eight-minute stretch; Andrew Nicholson battled for 11 rebounds. The young Magic, who weren't supposed to be competitive for a few seasons, were outclassing the team who represents the very city that delineates "class."

It really was beautiful. Orlando lost just one quarter in two games and aesthetically looked like the best team on the floor for a complete 96 minutes. This was a team who, on opening night, fought for three quarters against a reigning Eastern Conference finalist before getting manhandled in the final 12 minutes. This was a team who endured a sobering loss in overtime after hanging with one of the league's finest offensive powers for an entire four quarters. This wasn't the team we expected right out of the gates.

Orlando could have let its first two losses kill its confidence. It could have unhinged en route to two more losses at home against two teams much better than itself. But it didn't. The Magic probably won't may not keep up their sound defense and efficient offense for much longer, but they have successfully avoided becoming a team that trots out on the floor expecting to lose. As fans who are invested in this organization and as people who will watch 82 games, that's all you can ask.