The rookie guard electrified the Amway Center crowd Sunday by scoring 14 of his 19 points after halftime.

The Orlando Magic walloped the Brooklyn Nets on Sunday night, 107-86, behind 19 points from Victor Oladipo; a 17-point, 10-rebound double-double from Andrew Nicholson; and a 19-point, 12-rebound effort from Nikola Vučević. Arron Afflalo continued his well-balanced play by scoring 16 points with six rebounds and a career-high eight assists.

Oladipo scored 14 of his 19 points in the second half, in bunches, to help Orlando build a league the Nets could not surmount. After tying the Nets with 22 points in the first quarter, the Magic outscored the visitors in each subsequent period to earn its second consecutive win by 20-plus points. The fact that Brooklyn went 4-0 against Orlando, with an average victory margin of 19.7 points, just a season ago attests to the improvement that the Magic has made.

Afflalo's two three-pointers in the opening period were the highlights for a sluggish Magic team. Though Orlando shot a respectable 45 percent in the opening period, its shot-selection left plenty to be desired. Some of the iffier shots the Magic took that nonetheless found the bottom of the net: a turnaround jump hook by Jason Maxiell, a running floater by Jameer Nelson, and a contested long two-pointer off the dribble by Victor Oladipo. These shots are ones that the Nets would gladly give up again: the challenge Orlando would face the rest of the game is what to do when those poor shots stop falling. How would the home team create sustainable offense for itself? 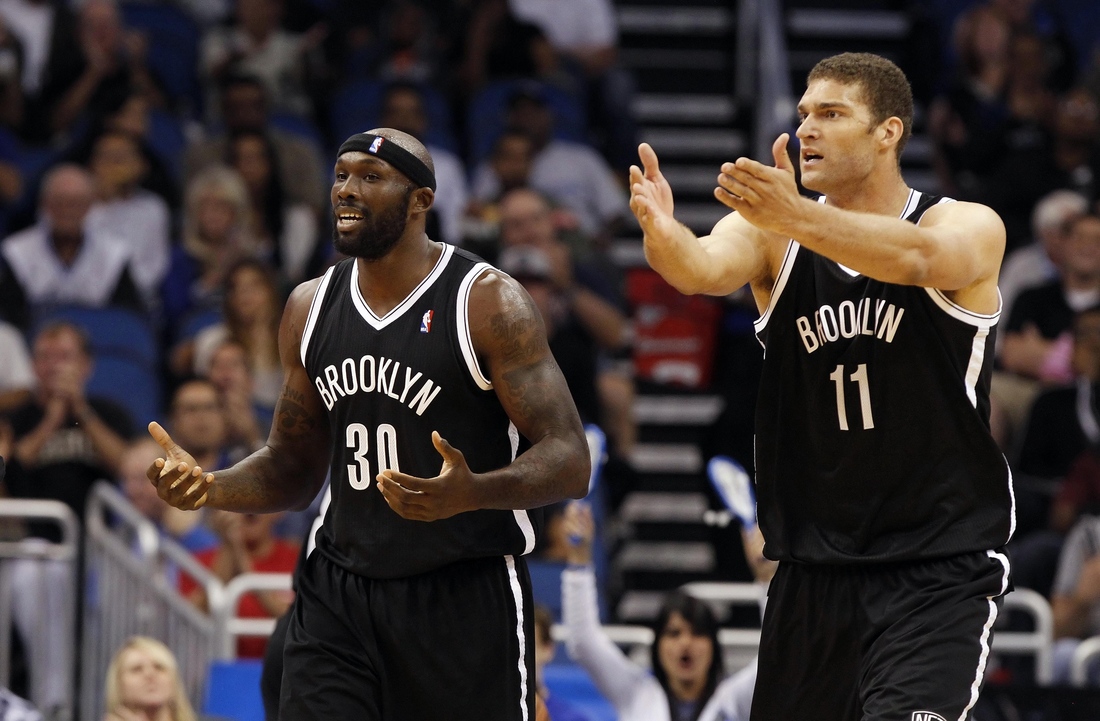 In the second period, the answer became obvious: feed Nikola Vučević. The Magic big man scored five straight Orlando baskets from the 6:22 mark to the 2:06 mark, capping off the streak with an uncontested two-handed jam that left Brook Lopez, his Brooklyn counterpart, exasperated with his teammates' lack of help defense, both his palms extended upward. Vučević finished the half with 13 points and seven boards to Lopez's 10 and three.

Orlando played remarkable defense in the first half, forcing the Nets to take 24 of their 44 shot attempts from the dead zone outside the paint but inside the three-point arc. Though Lopez and Kevin Garnett are proficient at hitting long twos, the Magic had to have to be satisfied with the shot mix it allowed Brooklyn. That the Nets only attempted five free throws in the first half also boded well for Orlando, which held a 41-38 lead at the break.

Orlando built its lead to 16 after less than five minutes of the third quarter, thriving against Brooklyn's surprisingly soft perimeter defense. Orlando ballhandlers managed to get by the first line of the Nets' defense with relative ease, creating good shot attempts at the rim or off kickouts for outside shots.

After the Nets cut the deficit to nine points, Victor Oladipo responded for Orlando. The Magic rookie scored or assisted on 10 straight Magic points to restore the lead, including two spectacular driving plays. One one, he beat Shaun Livingston off the dribble and then spun past Andray Blatche to get to the rim and finish with his right hand. Two possessions later, he squeezed a no-look pass in to a diving Vučević for a dunk. Every successive play brought the Amway Center crowd into an even greater tizzy than the one before, and not even a vintage Pierce three-point play could silence it for long: Nicholson ended the period by shot-putting a loose ball just before the horn.

Oladipo's impressive display continued into the fourth, and he nearly blew the roof off Amway Center with a 360-degree, two-handed fast break slam at the 10:14 mark of the period. The basket was his third consecutive for Orlando to start the period, gave the hosts a 21-point lead, and prompted Nets coach Jason Kidd to call a timeout. The Nets never seriously challenged again--they missed nine of their first 12 shot attempts of the fourth quarter--leaving the Magic to continue compiling highlights and chase career-high numbers.

Orlando finishes its first week with a 2-2 record against four likely playoff teams.