Magic vs. 76ers notebook: Orlando grinds out an ugly win

Orlando will certainly take Wednesday's win over Philadelphia, but it wasn't a pretty performance.

Share All sharing options for: Magic vs. 76ers notebook: Orlando grinds out an ugly win

The Orlando Magic won their second game in as many nights Wednesday, topping the Philadelphia 76ers by a 105-94 final. Nikola Vucevic dominated his former team, shooting 10-of-13 from the floor for 21 points, 16 rebounds, five assists, and three blocked shots. Arron Afflalo scored 11 of his 18 points in the fourth quarter to put the game away for Orlando.

"We hadn't had the best track history of backing up good victories with solid back-to-back victories on back-to-back nights," Afflalo said. "It got a little ugly there in the second and third quarter, but we showed mental toughness and got us a good victory."

Afflalo grinds one out

Wednesday's game wasn't one for the time capsule: there were no lead changes or ties after the first quarter, but one would be hard pressed to say Orlando was ever in command. Moreover, the teams combined for 32 turnovers--eight from Magic guard Victor Oladipo--adding to the sloppy, inexpert feel.

But Orlando got the win nonetheless, for which it is thankful. Winning ugly sure beats not winning at all.

"That was the ugliest 18 points I've ever seen in my life." Glen Davis on what he told Arron Afflalo about Afflalo's performance

"Ideally, you'd like to play the game to perfection, play it with a good rhythm, but some nights it's not gonna flow that way for you, as a team or individually," Afflalo said. The veteran swingman had shot just 3-of-11 from the floor for seven points before taking control in the fourth.

"We went to him," coach Jacque Vaughn said of Afflalo's play in the final frame. "He demanded the basketball and he was good when he got it. He ended up getting to a point where they double-teamed him and then he served as a cog for us on the post."

Afflalo said he didn't think the Sixers did anything special defensively against him, but rather that he struggled to find a rhythm. "The pace of the game was so crazy in the beginning that I never got into my own personal flow," he said, adding that his own missed layups and free throws only frustrated him even more.

He even heard from one of his teammates how ugly his game was: Glen Davis, who contributed 19 points as he made his second straight start, said he told Afflalo, "that was the ugliest 18 points I've ever seen in my life."

Davis working his way back

The Magic's stretch of four games in five nights is really testing Davis, who had not played since January after undergoing two procedures on the broken fifth metatarsal in his left foot.

"I'm still fighting to get them legs [back]," Davis said. Though he's "proud" of himself for what he's managed to accomplish so far, he knows he can do even more to help Orlando.

"I still feel like I can do a little bit more on both sides of the ball," Davis said. "I'm not getting enough rebounds."

Davis grabbed five boards in 35 minutes on Wednesday. When a reporter informed him of that rebounding figure, Davis exhaled sharply and shook his head in frustration.

In 2013/14, Davis has averaged 6.9 rebounds per 36 minutes, which average is well off his 8.3 average from the prior season. It should improve as his legs do, and shouldn't be a cause for long-term concern.

With 19 points Wednesday, Davis improved his per-game scoring to 13.3 on 50 percent shooting.

Orlando lost Jameer Nelson, its starting point guard, at the 7:27 mark of the second quarter with a sprained left foot. He did not return to the game and the Magic did not have any word on his status for Friday's game against the San Antonio Spurs.

Vaughn said he would consider what ramifications Nelson's absence could have on his starting lineup "after I enjoy my stuffing and turkey and a little bit of cranberry relish" on Thanksgiving.

Afflalo said Nelson's absence was "a big part" of why the Magic struggled to put the Sixers away Wednesday.

"He's obviously a key facilitator for us, a key player for us," Afflalo said of Nelson. He praised E`Twaun Moore for playing well for Orlando in the second half; Moore started in Nelson's place after halftime. The third-year combo guard finished with seven points, six rebounds, and three assists.

Nelson wasn't the only person on the court to sustain an injury and leave Wednesday's game: referee Tre Maddox sprained his ankle and left the game in the first quarter, leaving Jason Phillips and Brent Barnaky to call the game by themselves. 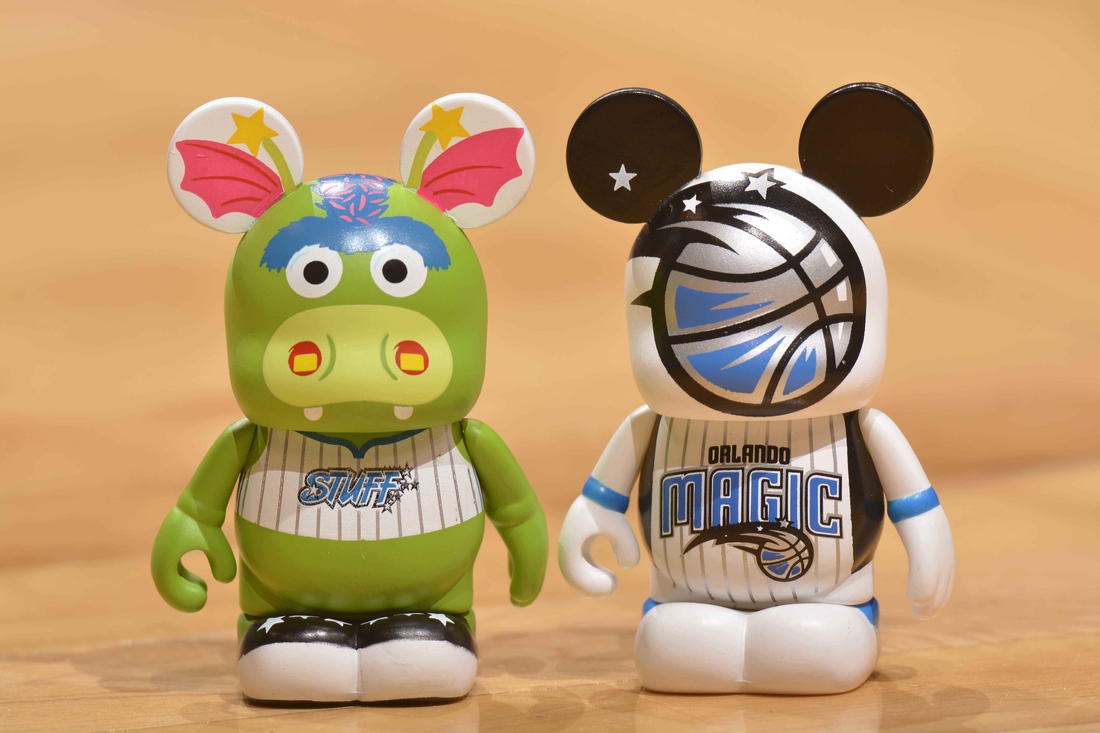 The Magic and Walt Disney World Resort have partnered to offer two exclusive Vinylmation figurines for sale in the Orlando Magic Team Shop. The figurines are three inches tall and are only available through the Team Shop, located at Amway Center, through December 19th. A photo of the figurines is embedded in this post.

The Orlando Magic Team Shop is open Monday through Saturday from 10 AM-6 PM; it has special hours on Black Friday and on Magic game nights. For more information, please visit its official website.

If a Magic opponent misses five free throws during a game at Amway Center, the team's fans can score a free large order of McDonald's fries. The only possible name for such a promotion is Fry Throws, and that's exactly what the Magic and McDonald's have named it.

The first 10,000 fans to text the word "fries" to 313131 after eligible games will receive a "mobile gift card" which they can redeem at participating area McDonald's locations the following day.

Representatives from the Magic, including Vaughn and CEO Alex Martins, will be on hand Thanksgiving morning to serve breakfast at the Coalition for the Homeless. It's the 21st straight year the Magic have held the event, which this year is expected to serve 700 homeless people.

Davis is hosting a carnival after the breakfast.