The young Magic forwards are part of the team's core going forward. ESPN took a look at where they stand, relative to their peers, at present.

For an ESPN Insider story Tuesday, analyst David Thorpe ranked the top 20 players from the NBA's rookie class of 2012. His assessment is that Anthony Davis, Andre Drummond, and Damian Lillard are the clear stars at the top, while the rest of the class features role players "who are not yet stars in any way."

The best option at power forward 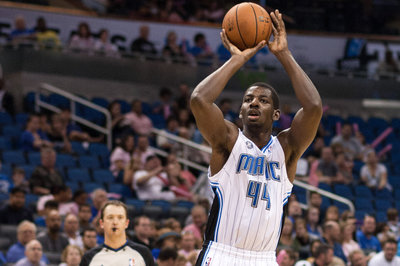 Nicholson, according to Thorpe, is the 11th-best player from the 2012 rookie class at present. Though he praises the St. Bonaventure product for being "creative" in the low post, he says Nicholson is "forcing the issue too often and not kicking the ball back out for a better shot or a re-post."

The Magic picked Nicholson with the 19th overall selection in 2012. As a rookie, the Mississauga, Ontario native averaged 7.8 points and 3.4 rebounds in 16.7 minutes per game. He has taken on a slightly increased role for Jacque Vaughn as a sophomore, logging 19.1 minutes per game and improving his per-game scoring to 9.5 and per-game rebounding to 5.5.

Thorpe is less impressed with Harkless than he is with Nicholson, ranking the athletic forward 19th in the 2012 class of rookies. "Harkless has probably experienced the biggest fall of the sophs since their rookie season," he says, because of his poor shooting. Until and unless Harkless becomes a more accurate jump-shooter, he will not fulfill his potential, Thorpe says.

Harkless has started all 13 of Orlando's games to date, averaging 8.5 points and 4.2 rebounds per game, with 1.9 combined steals and blocked shots. Those numbers are roughly in line with what he posted as a rookie, but his efficiency has regressed: the 20-year-old is shooting just 44.9 percent on two-pointers and 50 percent from the foul line, which inaccuracy has contributed in his True Shooting mark falling below 50 percent.

Orlando received Harkless and Nik Vučević from the Philadelphia 76ers as part of the four-team Dwight Howard trade in August 2012.

How would you rank the rookie class of 2012? Where do Nicholson and Harkless fit into your rankings?