Tyler Lashbrook highlights some of the NCAA's brightest stars and looks ahead at key matchups in the week ahead.

The college basketball season well underway and Orlando Pinstriped Post is here to tell you what's going on, what games to watch, and which players you should keep your eyes on.

So... about these freshmen, huh?

They're pretty good. In fact, they're more than "pretty good." They are exactly who they've been hyped to be and they are precisely why we've read about the 2014 Draft for the last four years.

Parker stole the show on college basketball's brightest stage in his hometown of Chicago at the United Center, and he hasn't regressed since then. In each of Duke's first five games, he's scored at least 21 points and he's been by far the best player on the floor. He's doing stupid stuff like this, practically mocking college basketball. "Oh, the NBA won't allow me to join straight out of high school? That's fine. I'll shove my game down these poor college folks' throats and force helpless, kind-hearted people to hate Duke a little less."

Wiggins isn't not living up to the hype; it's just that Parker is just blowing everyone's socks off. Wiggins is shooting the three-ball better than people expected -- hitting four of his 10 attempts -- while casually finishing backdoor oops on the regular. He isn't passive so much as he doesn't look to force shots; Wiggins lets whatever points he scores come in the scheme of the offense, ever so careful to not disrupt the team's flow. One of the most impressive aspects to his game? He never turns the ball over. Never as in he hasn't turned the ball over in the last two games while maintaining a 23 percent usage rate.

Large, wide, powerful men dominate college basketball and that is exactly what Randle has done in Kentucky's first five games.

Large, wide, powerful men dominate college basketball and that is exactly what Randle has done in Kentucky's first five games. Nobody at this level can body up with Randle, and if they do, he just spins or maneuvers his way around them. Or he draws a foul, which explains his 10.6 free throw attempts per game. Ten. Point. Six. In under 30 minutes a night. One knock on him early was his turnovers. But if you throw out the Michigan State game -- one in which he turned the ball over eight times -- he is averaging 2.3 per game. That's not good, but it's not nearly as preposterous as some make it out to be.

So yeah, these guys are good and they are each perennial franchise cornerstones. But...

Marcus Smart has been fantastic in a new role

I can't confirm whether or not Oklahoma State coach Travis Ford has asked Smart to be more aggressive, but that's exactly how the 19-year-old is playing. Smart has played a lot more off the ball this season and his assist rate has dropped four percent. He's looking to score at will this year and he's doing it with ease. He's just waving his expanded jumper in the face of every NBA fan, executive, and apologist who wanted him to turn professional before he was ready. That has to be the reason that Smart has upped his three-point attempts per game from four to 6.5. His shot doesn't look different, but it's connecting on 11 percent more tries this year and he isn't shy in the least to try jack them up. His career-high, 39-point performance against Memphis really was something, but that's what happens when an NBA player is playing in the Big 12.

The Must-Watch Player of the Week 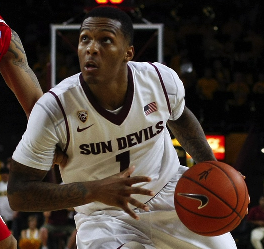 The completely biased, unquanitifable choice for who you should take time out of your busy schedule to watch this week is Jahii Carson out of Arizona State. Carson is slightly taller than the Sacramento Kings' Isaiah Thomas and slightly thinner than the Denver Nuggets' Ty Lawson, but he possesses a bit of both NBA players' games. Carson is super athletic, can run a team, and is hitting over 50 percent from three-point range this year. A week ago, he scored 40 points and dished seven assists against UNLV. His usage rate has increased and his turnover rate has dropped from 17.5 in his freshman season to 12 flat this year. The Sun Devils play No. 25 Marquette on Monday and No. 23 Creighton on Thursday. Both are must-watch gamesm if you want to see Carson in action.

What to watch this week

Syracuse's C.J. Fair is your four-year, do-it-all prototype draft prospect. He'll probably never be a full-time starter in the NBA, but there's a chance he'll carve his way into a role player. Both teams are undefeated, if that piques your interest here.

We already talked about Parker so let's take a different route here. For that we turn to Mr. Chad Ford:

Duke’s Rodney Hood is shooting 73% from field AND from 3 in 1st 5 games! Scouts all morning say he’s a lottery pick.

I have no clue why these teams are playing at noon on a Thursday, but I do know that it fits nicely between my two Thursday classes and I'll be tuning in. If you're a normal human being with a normal work schedule, this one might be tough to catch. Luckily, college students aren't normal human beings so I'll be able to fill you in with what Smart did.

The first game to watch is at noon and the other is an hour short of midnight. So I totally understand if you can't watch either game. Carson's exciting enough to keep you awake into the wee hours of the morning.

Florida is littered with borderline NBA talent. Seriously, six guys could make it to the league. On the other hand, maybe Patric Young is the only one who makes a roster. It could go either way.

Florida State's Ian Miller is the real diamond in the rough here. The senior guard is having the best season of his career, averaging over 17 points, three boards and three assists. Miller is explosive and great in transition; this season his shot starting to catch up to his athletic ability.

This is the jewel of the week but it means that both teams will have to take care of business on Wednesday. Duke faces Alabama and Arizona takes on Drexel. If that happens, though... Oh man. Off the top of my head, there are 28 NBA prospects that would potentially play in this game. Okay, 28 is a little high... Seven. But, still, that's a great Friday night showing and something NBA fans would certainly pay attention to.