Magic at Heat: Previewing the game with Hot Hot Hoops

OPP gets caught up on the defending champions in advance of Orlando's looming matchup with Miami.

Share All sharing options for: Magic at Heat: Previewing the game with Hot Hot Hoops

To get a better handle on the Miami Heat in advance of their game Saturday with the Orlando Magic, we talked to Kevin Kraczkowski, a contributor at Hot Hot Hoops, via email. You can read the Magic-centric portion of our exchange at Hot Hot Hoops. Here's how our talk went.

Evan Dunlap, Orlando Pinstriped Post: This season is the Heat's fourth since adding LeBron James and Chris Bosh. The team has reached the Finals in each of its three seasons together and has captured the last two NBA titles. Further, the team didn't turn over much of its roster from last year. So my question is: what is different about the 2013/14 Heat squad? I'm referring of course to personnel, but also to style of play.

Kevin Kraczkowski, Hot Hot Hoops: The HEAT lost sharpshooter Mike Miller after the Finals due to some salary cap maneuvers. He's producing very well for the Memphis Grizzlies. In his place, the HEAT inked former second overall pick Michael Beasley, who after spending his first two seasons in Miami and his next two with the Minnesota Timberwolves, found himself with the Phoenix Suns last season. Still just 24-years -old, the ambidextrous enigma seems to fit in Miami's rotation as another scoring option after Wade, James, Bosh, and [Ray] Allen.

Miami also has signed Greg Oden in a low-risk, high- reward gamble. Oden and Beasley signed with Miami for the veteran's minimum, just over $1 million. Although he's yet to appear in a game, and indeed has yet to be activated, he's right on pace in his rehabilitation. The long view on Oden is that he can come in for eight-to-10 minutes per game and give Miami that big defensive presence when the HEAT need to shut down opponents with the game in the balance. He should make his first appearance around January, but maybe sooner.

As for the HEAT's play, one of the main points that I can focus on is the three point shooting. Last season, they ranked second in the NBA by shooting at a 39.6% clip. This season, the three-point success rate is an otherworldly 45.9%. This improvement in team precision isn't an abberation. Mario Chalmers, Norris Cole, Chris Bosh, James Jones, Michael Beasley, Roger Mason, LeBron James, Rashard Lewis, and Ray Allen are all shooting better than 40% from deep. Allen, Shane Battier, Lewis, and Chalmers all have also shown an increased chance of driving to the rim. This does not allow opposing defenses to concentrate on everything the HEAT can kill them with, and doesn't even take into consideration the "Big Three." The team is built very well.

OPP: To hear Erik Spoelstra tell it, Dwyane Wade is essentially day-to-day for the rest of the season owing to sore knees. How concerned are you with Wade's lingering knee issues, and to what extent does the fate of Miami's season rest on those knees?

HHH: As I stated in the last answer, the HEAT are running deep. They've got a ton of ways to make opposing teams pay without even accounting for the "Big Three."

Wade is day-to-day, but over the last three seasons, the HEAT can boast a 31-8 regular season record with him riding the pine. I like Wade, and I think he has a lot to offer, but Miami's postseason hopes don't depend on his knees. The plan during the regular season is to rest him on the second game of back-to-backs against other- than-elite opponents. This will keep him relatively fresh for the stretch run and another long playoff engagement. Considering the Heat have played 67 additional playoff games since the dawning of the Big Three era (66 of which included Wade), having Wade fresh can only behoove team depth. Including the playoffs, Wade has averaged 92 games per 82 game-season over the last three seasons. He's still Dwyane Wade, and he can still drive the lane, kill you with daggers, and play above the rim when he needs to. Just stay off his lawn! 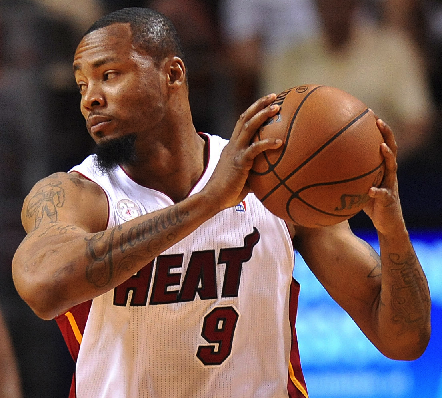 OPP: The view from here is that Rashard Lewis, formerly of the Magic, has a larger role with the Heat in 2013/14 than he did in his first season in South Beach. How would you assess his play to date, and do you expect him to maintain this role as the Heat advance through the postseason?

HHH: Lewis is averaging five more minutes per game than he did in his initial campaign with Miami. His totals over 36 minutes reveal an interesting transition in his game.

His scoring per 36 minutes dropped from 13 to 9.8, but his assists per 36 minutes is a career-high 3.6, over a full assist better than his previous personal best (2008-09, with the Magic). He's also making 2.2 steals per 36 minutes, another personal high- water mark. His Player Efficiency Rating currently stands at 13.3, his best since rating 14.0, (again with the Magic, in 2009-10). Prior to this season, he stated that he is now the healthiest that he's been in years, and his play has been backing that up.

OPP: From a personnel standpoint, what do you believe to be Miami's most significant area of need, and by what means can Pat Riley upgrade that area, if necessary? It doesn't seem like the Heat have many trade assets, but I could be mistaken.

HHH: Miami is averaging an NBA-worst 35.5 rebounds per game. Would you consider that a weakness? Most would, but Miami is also leading the NBA with 52.2 percent shooting. In short, there are fewer boards to grab, because the HEAT don't generate the same amount per shot as do other teams. Maybe that's an oversimplification, but there's something to it. Last season, when the HEAT went 66-16 and won their second straight title, they were worst in the NBA with 38.6 rebounds per game. Generating second-chance points is less of a concern with this team.

I feel like the HEAT addressed what they needed to by signing Oden, but I also thought at the time that he would step right into the rotation. Chris Andersen has really toughened the team up in the paint, but he only plays 17.1 minutes per game. Chris Bosh can also add to Miami's prowess in the shot blocking department, with 1.4 per game to his credit.

I guess Pat Riley could possibly upgrade this area by bringing another big in via trade or free agency, someone in the vein of Vítor Faverani for Norris Cole (and maybe a second round pick).

OPP: As you survey the rest of the East, which teams do you think pose the biggest challenge to Miami's earning its fourth straight NBA Finals appearance, and what makes those teams particularly formidable to the Heat?

HHH: A lot was made of Miami's competition this season. The Bulls, Nets, Pacers and Knicks were most mentioned as the biggest threat to the crown. Now, about 15% of the way through the season, the two New York teams seem to be out of the running, and the Bobcats, Hawks, and Raptors join Indiana and Chicago in the discussion. Of these five, the obvious threat is the Pacers. We'll see the first meeting between the two on December 10th. In the meantime, we can just offer theories. I don't think the HEAT have any answer for Roy Hibbert, other than to avoid shooting near him. Incidentally, this game would be the ideal time to activate Greg Oden and let him get a little time on the hardwood.

Thanks to Kevin for answering our questions. Head to Hot Hot Hoops for complete coverage of the Heat.

Magic at Heat: Schedule picks back up for Orlando