Getting the Orlando Magic back on track

Orlando enters Saturday's game against Miami having lost five of its last six games. How can they return to form?

Share All sharing options for: Getting the Orlando Magic back on track

As we outlined on Thursday, the Orlando Magic have lost five of their last six games, which streak has returned them to near the middle of the NBA's pack. That post did not address the specific problems presently plaguing the men in pinstripes, an oversight we aim to rectify here. In this space, we explore what's gone wrong of late and offer some solutions.

It's probably not a total coincidence that the Magic's offensive malaise started when coach Jacque Vaughn cut Andrew Nicholson's minutes. The St. Bonaventure product was arguably Orlando's best offensive player in his rookie season, but due to some tough individual defensive matchups he'd have to face in some of Orlando's recent games--Vaughn pointed specifically to Miami Heat backup Michael Beasley on Wednesday--he's played just 14.8 minutes per game in the Magic's last six contests.

There's a wealth of compelling evidence that suggests the Magic play significantly better with Nicholson in the lineup.

Nicholson is struggling to convert from three-point range, missing 14 of his 18 triples in the young season as he incorporates the corner three into his NBA arsenal, but he's otherwise an ace scorer. He leads the team in two-point shooting percentage, at 55.6 percent, so his absence in Wednesday's loss was particularly confusing, given that Orlando shot just 33.3 percent on two-point baskets. Nicholson provides a level of offensive reliability which Jason Maxiell and Solomon Jones, whom Vaughn has played ahead of the 23-year-old, can't, so it's puzzling that he's sat in their favor when it's clear Orlando could use his scoring.

The book on Nicholson is that he's not a strong defender or rebounder, but he appears to have addressed those concerns in his second season: the Magic are 7.7 points per 100 possessions better defensively with Nicholson on the court in 2013/14, and while the quality of opposition he tends to face as a reserve plays into that figure, it still indicates that he's not as much of a liability now as he was as a rookie. For further evidence of his improving individual defense, consider that he's allowed players he's guarded to shoot just 37.7 percent from the floor, according to mysynergysports.com.

In short, there's a wealth of compelling evidence that suggests the Magic play significantly better with Nicholson in the lineup. I don't think returning him to the rotation would cure all that ails Orlando, but I also don't think he'd be a net negative, either. 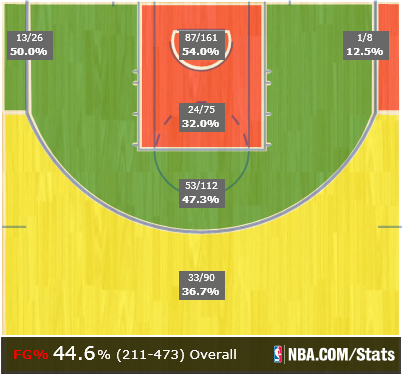 In its last six games, Orlando hasn't been able to find the range.
Image via NBA.com/stats

Not to be obvious, but it's impossible to score without putting the ball in the basket, and in this six-game stretch, the Magic haven't exactly done that. Apart from Arron Afflalo, scoring 25.5 points per game during that stretch, Orlando has struggled on that front. The team is shooting 44.6 percent from the floor overall in that span, and several of its key perimeter players are mired in 40-percent-or-worse slumps. The main culprits are Maurice Harkless (40.4 percent on 7.8 attempts), E`Twaun Moore (39.4 percent on 5.5 shots), Jameer Nelson (36.2 percent on 11.5 tries), and Victor Oladipo (33.8 percent on 11.8). The types of shots those four wings have taken are, for the most part, in line what what Orlando needs them to. The issue is conversion, not selection.

As Stan Van Gundy liked to say when he served as Orlando's coach, the NBA is a "make-or-miss league." The Magic, at present, are missing shots. The shooting strokes will return eventually--Nelson, in particular, is infamous for starting seasons slowly--but until then, the team has to plug away at its offense as normal.

Clean up the turnovers

Related to the issue of making shots is simply not being able to take them: more than one-fifth of Orlando's possessions in its 1-5 skid have ended with a turnover, according to NBA.com/stats. That turnover rate is the league's worst since November 8th, and while it's easy to place the blame on Oladipo's shoulders--the rookie is committing 4.3 turnovers per game in his last six appearances--the truth is that turnovers are a team-wide responsibility. Nelson is averaging 3.2 per game himself, for example.

Teams like Orlando, which is to say teams without a true go-to star, even accounting for Afflalo's brilliance in the young season, can ill afford to waste so many possessions. The Magic's sets rely on a good sense of timing, hard screens, and crisp execution to succeed. There are so many moving parts that even the smallest miscue can blow up a possession. If Orlando can take better care of the rock, it'll get more opportunities to score and offer its opponent fewer chances to convert in transition.

Reducing turnovers will also aid Orlando's defense: the Magic have yielded 16.7 fast-break points per game in this six-game stretch, the third-highest figure in the league. Live-ball turnovers are only one factor that can lead to fast-break baskets, of course, but they're a particular bugaboo for this Orlando team. Taking better care of the ball will allow the Magic to defend with a set group of five guys, instead of a lineup scrambling to pick up their respective men in transition.

That point is important because, to these eyes, the Magic are playing with sounder defensive principles than they did in their first season under Vaughn. For the most part, they've walled off the paint and forced teams to beat them with two-point jumpers. Sometimes their opponents do just that--Boston Celtics guard Avery Bradley went 7-of-9 on long deuces against Orlando on November 11th, and I'm quite sure the Magic would yield those same looks to him again, if they could have a do-over--but daring foes to take the least efficient shot in the game is a gambit worth making.