Orlando's second-year wing is shooting 40 percent from three-point range in 2013/14.

Magic fans have plenty of reasons to be excited about Maurice Harkless. After the All-Star break in his rookie year, his minutes jumped from 20 per game to nearly 36 and he responded by posting 13 points, five boards, 1.5 steals, and a block as a 19-year-old rookie. He had his limitations, however. His shaky ballhandling limited his playmaking ability and his unreliable jump shot hindered his overall effectiveness.

Through the 2013/14 season's first ten games it's clear that his jump shot is much more consistent and he's much more comfortable shooting from behind the arc. He hit 8-of-15 threes through the first eight games before missing all five attempts in his next two; as a rookie, Harkless connected on just 27.4 percent of his three-point attempts. Through the first 10 games of 2013/14, Harkless has hit two three-pointers in four different games. He hit two or more threes in just seven games in 76 appearances as a rookie.

To understand how his shot has improved, we must first see what was wrong with it in the first place.

In this video, you can see first-hand the inconsistencies in Harkless' jumper in college. His release point is inconsistent -- often way too high -- and the ball, in turn, would blast flatly out of his hands toward the rim. Sometimes he follows through, letting the ball float off his fingertips, and other times it looks he's flinging the ball blindly at the rim.

Here you can see the ball is high above his head and held back like a slingshot:

And there's the non-existent follow through. I cut the clip a little early but there's no extension there, rather, Harkless just pushes the ball toward the rim.

This was a contested shot and, as such, Harkless was forced to adjust his release, but if you watch the video, you can see that high release point on nearly every shot. It causes his shots to veer right toward the rim with relatively no arc or touch. Rarely does he follow through, and if he does, it looks forced. It looks like he's flicking the ball at the rim just hoping to draw iron.

These were the same issues that bothered the St. John's product in his rookie year with the Magic. A sports hernia kept him out of his first training camp, so he wasn't able to fix his jumper during that pivotal developmental period. The problems with Harkless' jumper in the above video are the same that dogged him in his rookie season and dragged his three-point percentage below 30.

Harkless told John Denton of OrlandoMagic.com on November 3 rdthat his shot "feels a lot better" now that he's in his sophomore campaign.

"...I get the ball off quicker and higher," Harkless said. "A lot of times last year my ball would be flat when I was shooting. It's something that I worked on a lot this summer."

He's not holding onto the ball as long in his jump and the arc on the release is higher, with much softer touch. His jumper doesn't look like an overhead pass anymore. His release point is consistent and, in turn, his shot finds the bottom at a much higher rate.

Below is a garbage time three-pointer against the Indiana Pacers. You can see how Harkless sets his feet with a nice, balanced base. He squares his feet toward the rim and, though you can't see in the screengrab, he doesn't hesitate on this attempt. 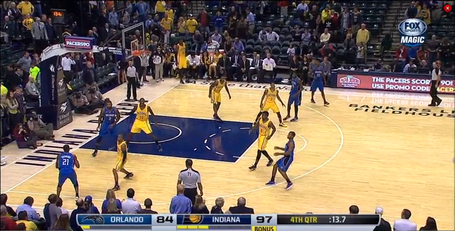 And here you can see the extension of his arms. His release point isn't too low or too high and he lets go nearer the middle of his jump. He's leaning back a little bit, but it's not really enough for concern. 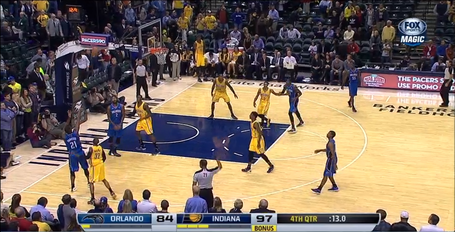 Harkless hits this shot. It's his second of the game on as many attempts.

In this screenshot against the New Orleans Pelicans, Harkless is, again, spotted up in the left corner.

Harkless has plenty of space on this shot and he doesn't hesitate to pull the trigger. His base is nearly identical to the base in the Pacers photo. His shoulders are squared against the rim and his feet are consistent with the first screenshot.

His arms extend, as they did before, and he jumps straight up and down. The backwards lean is still there, but again it's not nearly enough for too much concern. The consistency here is what you should pay attention to. Both screen shots are eerily similar, which is great news for Harkless and his jumper.

This is how most of Harkless' jumpers look now. Harkless is much more confident nearly in the season. There isn't much variance from one shot to another and he's quick to pull the trigger. Last year he shot as if coach Jacque Vaughn was standing over his shoulder telling him to shoot; this year, he's shooting because he knows he can hit it.

Look at Harkless' shot distribution in his first two seasons: 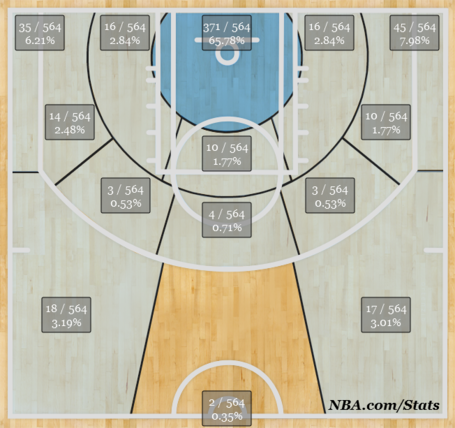 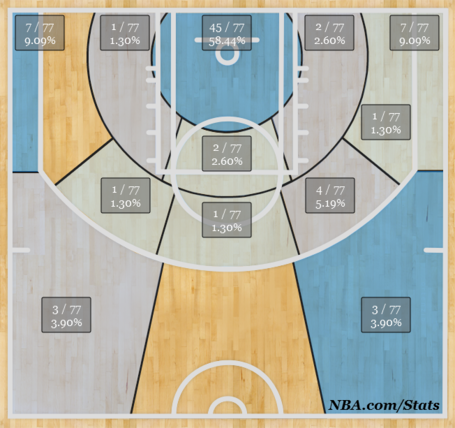 Opponents aren't buying into Harkless' early shooting success and are choosing to play the drive on the ball and often ignoring the 20-year-old when he spots up off the ball. Look how far Vince Carter sags into the lane on this Nik Vučević post up: 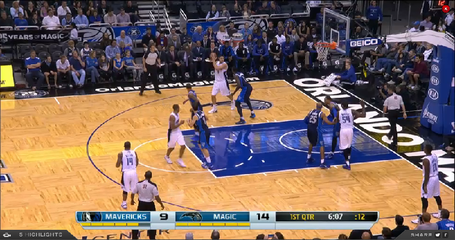 And here the Milwaukee Bucks completely ignore Harkless, choosing instead to pack the strong side of the floor. 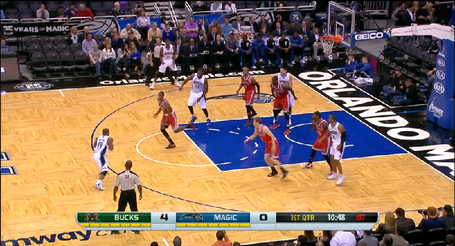 On each of these Magic possessions, over a third of the floor is completely eliminated because teams still don't respect Harkless' jumper. That lack of spacing cramps Orlando's offense and neither of the aforementioned trips down the floor resulted in a basket. This issue is consistent when Harkless spots up behind the arc and it really hurts the fluidity of Orlando's offense.

Harkless must continue knocking down three-pointers at a 40-percent clip or opponents will assume he's still the guy shooting on the wrong side of 30. Even if he does continue converting treys at a high percentage, teams are likely willing to give him a jump shot in order to shut down two-thirds of the floor with five other defenders. But Harkless' improved shooting early is an encouraging sign for Orlando and the development of one of its most important young cogs.