Though he was fully healthy, Orlando's starting point guard and co-captain didn't play the final 17 minutes of what had been a close game Saturday.

Share All sharing options for: Magic vs. Mavericks notebook: Jameer Nelson sits due to "coaching decision"

Despite 25 points from Arron Afflalo, the Orlando Magic fell to 4-6 on Saturday in a 108-100 loss to the Dallas Mavericks. Here's a look at the stories that developed.

Nelson benched for most of second half

Despite being fully healthy, starting point guard and team co-captain Jameer Nelson did not play the final 17:23 of Saturday's game. Magic coach Jacque Vaughn pulled Nelson at the 5:23 mark of the third quarter with his team trailing by 11 and never asked him to return to the game, even when the Magic drew to within four points in the fourth quarter.

"Just moreso a coaching decision," Vaughn said in his post-game press conference. "At the time we were playing small, and it gave us a chance to keep Vic [Oladipo] in the game and experience the fourth quarter and try to get a comeback, to be within four [points] with six minutes [left in the game]. Just a coaching decision. That's it."

Nelson, who scored an efficient 15 points in his 23 minutes Saturday, politely declined to speak to reporters following the loss.

Oladipo, the second overall pick in June's NBA Draft, finished the game with 10 points, a team-high six assists, and a game-high nine turnovers. In that final stint playing ahead of Nelson, he had all 10 of his points, four assists, and five turnovers. He committed critical turnovers on back-to-back possessions with Orlando trailing by four and fewer than six minutes to play.

"The point guard has to be a leader out there so I got to do a better job." Victor Oladipo

"It was a real close game and I have to learn to execute in those times," Oladipo said. Later, the Indiana product accepted some responsibility for the Magic's turnover woes in the fourth quarter.

"Most of it is on me, the point guard," Oladipo said. "The point guard has to be a leader out there so I got to do a better job."

The Magic's other players deferred to Vaughn in this instance. "That's his job and his discretion," Arron Afflalo said. Nik Vučević would only say, "It's coach's decision."

Afflalo explained the differences between the styles of Oladipo and Nelson. 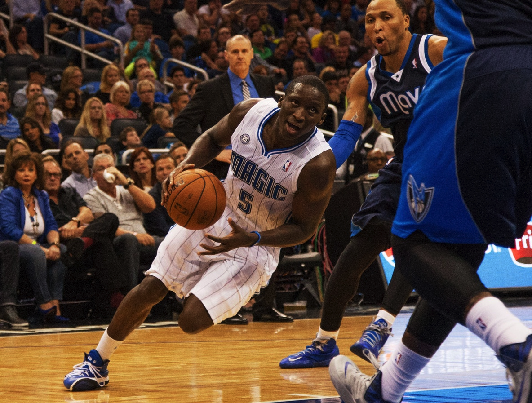 "Victor's just very, very aggressive. As he gets more experience at the one, [with] his aggression, he'll really be able to take advantage of defenses because he's so big and strong and athletic that every time he dribbles and gets himself into the paint, he's drawing so much attention."

What's key for the Magic rookie, Afflalo said, is learning "when to pick his spots," specifically by finding the right balance between driving to create contact, knowing when to shoot, and setting up his teammates.

Solomon Jones made his home Magic début Saturday just 17 days after tearing the lateral meniscus in his left knee. After consulting with several doctors, he elected not to undergo surgery, which decision looks wise at the moment, as he finished the loss to Dallas with two points, two rebounds, and two fouls in eight minutes off the bench.

"It felt good to be back on the floor," the Mount Dora native said after the game.

"Would have been a little bit better if we would have gotten the win tonight, but other than that, my knee's feeling pretty good. I'll just keep rehabbing and go from there."

Jones made the Magic's opening-day roster out of training camp. His coaching staff and teammates appreciate his experience, with Vaughn specifically citing his knack for being "in the right place at the right time" as one of his best assets.

Of Jones' play Saturday, Vaughn said, "he gave us some very productive minutes."