The Dallas Mavericks topped the Orlando Magic, 108-100, on Satuday night behind six players in double-figure scoring. Orlando got 25 points from Arron Afflalo; 16 points and eight rebounds from Nikola Vučević; and an aggressive 12 from Maurice Harkless, but could not stop Dallas' pass-happy, mostly hot-shooting offense. Monta Ellis had an Ellis-like game, with 19 points on 19 shots, but Dirk Nowitzki added 16 on 6-of-12 shooting and DeJuan Blair scored 18 garbage points off the bench.

Victor Oladipo tallied 10 points and six assists off the Magic's bench on 3-of-8 shooting, but he committed nine turnovers. He played point guard for the entire fourth period as Jameer Nelson sat. In just 23 minutes, Nelson, the starter at point guard, scored 15 points with four rebounds and two assists.

At press time, it was not clear if Nelson had sustained an injury.

The Magic played through Vučević early in the game, stationing the seven-footer in the high post and allowing him to facilitate. He read Dallas' defenses well and passed willingly, allowing him to accumulate four first-quarter assists: three shots at the rim and one three-pointer for Nelson. Putting Vučević in the high post also drew Mavs center Samuel Dalembert away from the basket, nullifying his best NBA skill. To Dalembert's credit, he still picked up a block in the first quarter anyway.

Dallas closed the first quarter on an 11-2 run, which a Vučević turnover sparked: Ellis picked off his pass and advanced it to José Calderón in the left corner for a three-pointer, putting the Mavs up one at the 2:45 mark. With its second unit in the game, Orlando would score just two points the rest of the way.

The Magic's second-unit offense continues to struggle as Oladipo eases into a playmaking role. On one second-quarter possession, Oladipo dribble near the top of the arc for about 16 seconds while waiting for a play to develop. He lost his handle and quickly moved to recover it, but with just five seconds remaining on the shot clock, he passed directly to Mavericks guard Gal Mekel, leading to a fast-break layup by Jae Crowder on which the referees missed an obvious foul against Maurice Harkless. Crowder's score put the Mavs up 12, which, to that juncture, was their largest lead of the game. 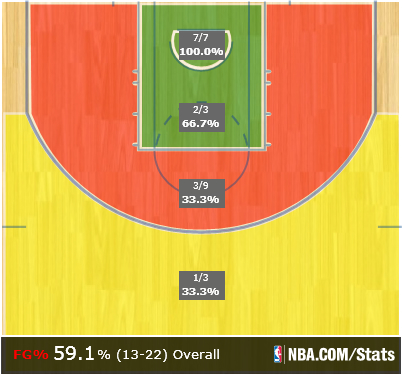 In the second period Saturday, the Mavs had their way inside.
Image via NBA.com/stats

Dallas took command in the second period because it took good shots and met very little resistance, going 9-of-10 in the painted area. Orlando turnovers created some of those easy looks.

Orlando trailed by a 59-46 margin at halftime, with only the solid play of Harkless (10 points, three rebounds, two assists) and Vučević (six points, five rebounds, four assists), as well as the team's 22-17 rebound advantage, serving as positives. The Mavericks were otherwise firmly in command, with just two turnovers to Orlando's nine and nine steals to Orlando's one. Had the Mavs not missed 11 of the 15 threes they tried, the game could have gotten even more out of hand for the hosts.

The Mavericks continued their hot streak into the second half, making five of their first six shots of the third quarter. But because the Magic committed just one turnover during that stretched, they managed to trim the deficit to nine points, offering hope that they could climb back into the game if they could only tighten their defense.

Moments later, the Magic stopped two Mavs shots right at the rim, rebounded, and got out in transition, with Oladipo pushing the ball ahead to Arron Afflalo for an in-rhythm, pull-up deuce, cutting Dallas' lead to seven points.

Orlando's offense caught fire in the third period, shooting 68.4 percent from the floor and scoring 34 points to shave six points off Dallas' halftime lead. As they've done all season, Vučević and Afflalo carried the offensive load, scoring eight points apiece on a combined 6-of-7 shooting.

Dallas managed 28 points in the period and found the range beyond the arc after a cold first half. Crowder sank a key triple at the 36-second mark to answer one that Oladipo drilled one possession earlier; Oladipo's shot cut Dallas' lead to just six, the smallest it'd been since the 10:20 mark of the second period, but Crowder's basket extended it to nine again.

The Magic continued to work their way back throughout the fourth period and benefitted from playing aggressively, getting into the bonus with 7:27 to play in regulation. A pair of Afflalo free throws and a Vučević jump hook over Dalembert--playing with five fouls--cut Dallas' lead to four, and Vučević barely missed another hook that would have trimmed it to two.

Dallas' own cold streak aided Orlando's comeback effort: the visitors missed 11 of their first 13 shots of the period, and those misses could have created transition opportunities for Orlando if Oladipo were playing under control. But back-to-back Oladipo turnovers off Mavericks misses cost Orlando dearly; on both occasions, the Magic trailed by just four points.

Both teams went scoreless for more than two minutes until Shawn Marion ended Dallas' cold streak by drilling a corner triple, putting it up seven. Moments later, Nowitzki hit a crucial three-pointer from the right wing to put Dallas up nine at the 3:11 mark.