The sleeved jerseys are now on sale in the NBA's online store.

The NBA has really pushed sleeved jerseys over the last season-plus, with the Golden State Warriors and Phoenix Suns adding a sleeved alternate uniform to their respective wardrobes in that span. That push expands on Christmas 2013, when all 10 of the teams in action that day will wear sleeved jerseys. The event is called BIG Holiday, and follows up the BIG Color campaign from 2012, when teams wore monochromatic uniforms. 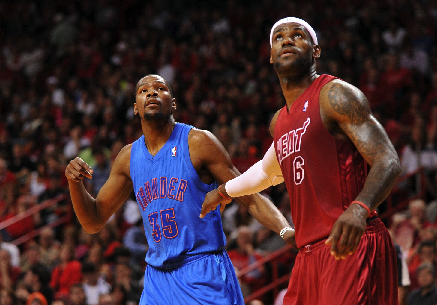 The Orlando Magic aren't scheduled to play on Christmas, but adidas has put together a sleeved jersey for them anyway, and a version bearing Tobias Harris' name and no. 12 is now available in the NBA's official online store. The black jersey prominently features the Magic's trailing-ball logo, rendered in silver and blue, across the chest. The jersey number, in white with silver trim, adorns the left sleeve and the back.

This particular sleeved style--not just the Magic's, but the entire BIG Holiday set--is not my taste, as I find it lacking personality and style, the two individual traits which most define NBA athletes' on-court moves. A different issue is that they resemble warm-up shirts instead of game gear, but the NBA, I gather, hopes to shift that paradigm as more teams add sleeved looks.

I turn the question over to you: are these sleeved jerseys cool or uncool? Please vote in the poll embedded in this post.