It took Jacque Vaughn some time, but Orlando's coach finally found a lineup that could match the small Bucks' effectiveness.

Share All sharing options for: Magic vs. Bucks notebook: Small lineup works in a big way

The Orlando Magic rallied past the Milwaukee Bucks. 94-91, on Wednesday behind Arron Afflalo, whose 36-point, eight-rebound, six-assist effort certainly ranks as the best overall performance of his career.

"He had a courageous effort to not let his team lose on both ends of the floor," coach Jacque Vaughn said of Afflalo. "He was great tonight."

Here's a look at some of the stories that developed Wednesday as Orlando improved to 4-5 on the young season.

Small lineup a plus

The Bucks didn't have LARRY SANDERS!, Ersan Ilyasova, or Zaza Pachulia available for Wednesday's game, leaving them with only Ekpe Udoh, John Henson, and Miroslav Raduljica to man the middle. As a result, Milwaukee played a small lineup which frustrated the Magic in the early going: the Bucks blitzed Orlando's usual starting lineup of Jameer Nelson, Afflalo, Maurice Harkless, Jason Maxiell, and Nikola Vučević by jumping out to a 15-9 lead in the opening five minutes of the game. Vaughn, who knew going into the game that the Bucks would play small, pulled Maxiell after that stint and didn't use him again the entire night.

"We started traditional tonight with Maxiell," Vaughn said. "We were gonna give that a run until I felt it wasn't efficient for us."

After mixing and matching, Vaughn found a lineup he liked with veteran point guard Ronnie Price taking Maxiell's spot with the four other starters. In 18 minutes together, that group outscored Milwaukee, 36-31, and outrebounded it by a 21-14 margin, according to NBA.com/stats.

For his part, Nelson found the lineup unusual. "It was weird," the Magic point guard said. "That's the first time we've ever done it."

Though playing small disoriented the Magic at first, having to adjust to it on the fly helped the team, according to the nine-year veteran.

"When Coach threw that lineup out there, we were kinda uncertain and indecisive in our discipline in terms of our defense and our offense as well. Once we just figured out, 'stop thinking,' I know it sounds funny, but to stop thinking and just play, we made our mind up to play defense as hard as we can and it made the game easier on ourself."

Orlando signed Price a minimum-salary contract over the summer, hoping the eight-year veteran would be a steadying presence in the locker room and in a handful of minutes on the floor. He played just 21 minutes in five appearances across the Magic's first eight games. 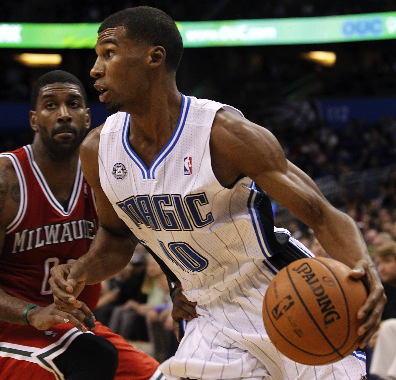 But Vaughn called on Price for a major role Wednesday, and the point guard delivered, with two points, seven rebounds, two assists, a steal, and a blocked shot in 25 minutes. The Magic outscored the Bucks by eight points with Price on the floor, giving him the best plus-minus ratio for any player on either team.

"His number was called and he was huge tonight," Vaughn said.

"He came and gave us everything he had," Nelson said of Price, echoing his coach's praise. "He's on the team for a reason, and he's a true professional. It shows why he's been in the league for so many years."

Price's preparation--which he does "the exact same way" every game, he says, regardless of his anticipated role--is key to his ability to contribute at a moment's notice. Vaughn praised him for his work with "the scouting report and film this afternoon," but Price himself said there's a physical aspect to preparation as well: "When your name is called, you don't want to be out of shape, so you have to do extra things to prepare yourself and prepare your body physically."

The Bucks outrebounded the Magic, 13-9, in the first quarter as they built a 36-23 lead. But for the rest of the game, Orlando outboarded the visitors by a decisive 36-26 margin. While Vučević led all players with 11 rebounds, the Magic got a collective effort in that area of the game, with Harkless getting nine, Afflalo snaring eight, and Price coming away with a career-high seven.

The Magic didn't allow the Bucks to grab a single offensive rebound, in 19 opportunities, after halftime.

"They [the perimeter players] got an opportunity to rebound for us," Vaughn said. "We talked about that, that Nik isn't the only one responsible for rebounding for us, that our smalls have to get back and help him. I think overall they did a good job of doing that, our smalls getting back and rebounding. So we talked about it and they went out and made adjustments."

Those adjustments proved effective: the Magic didn't allow the Bucks to grab a single offensive rebound, in 19 opportunities, after halftime. Vučević had five defensive boards, with Afflalo and Price getting four apiece.

"You give up too many offensive rebounds and give teams second looks at the basket, the percentages of them scoring on the next possession are pretty high," Price said. "You try to eliminate that as much as possible. We know that Nik can't get every rebound. When the bigs are blocking out, sometimes that leaves chances for the guards to get rebounds. I just had some bounce my way tonight."

Afflalo worked comprehensively on all aspects of his game over the summer, and said he has changed his approach to improve as a rebounder.

"I just conditioned my mind to get in there and help Nik a little bit," the UCLA product said. "Nik's obviously a great rebounder, one of the top-five rebounders in the NBA, but he can't do it all by himself. So I just kinda condition myself mentally to not leak out, to not stand around, but get in there, and, when I see the shot go up and my man's not goin' for the rebound, go in there and try to get it."

After their effort Wednesday, the Magic rank sixth in the NBA in rebound percentage, getting 51.4 percent of all available rebounds.

Not swinging for the fences

The Magic have talked in recent days about avoiding trying to make "home-run plays," as they have a tendency to produce turnovers. Vaughn said Tuesday that "making the simple pass is good enough," a point he repeated Wednesday in his pregame meeting with the media.

"We've been talking about not making the home-run play, and making singles and doubles," Vaughn said.

To help make his point, Vaughn mentioned Bucks rookie Nate Wolters, who entered Wednesday's contest with a 6.8-to-1 ratio of assists to turnovers, the league's best.

"You take a guy like Wolters, who's on Milwaukee, he does doubles, singles, and he bunts at the same time," Vaughn said. "That's why his assist-to-turnover ratio is what it is. He just makes the solid, simple play, and sometimes, that's good enough."

Orlando committed 16 turnovers on Wednesday for 20 Bucks points, but Milwaukee was every bit as shaky on that end, committing 18 for 20 Magic points. Wolters had three dimes and one turnover to drop his assist-to-turnover ratio to 6.2-to-1.

Second-year forward Andrew Nicholson entered Wednesday's game having gone 0-of-9 from three-point range in Orlando's previous five games, bringing his conversion rate on triples to 23.5 percent on the season. Nicholson didn't try any threes as a rookie but worked over the summer to incorporate the shot into his NBA repertoire.

Vaughn still has confidence in the young power forward.

"I reminded Andrew yesterday to shoot the basketball, and to shoot it from three," the coach said. [....] "I have extreme confidence that he can make that shot, and I want him to have that confidence also."

Even if Nicholson misses his treys, his very presence on the floor helps draw opposing defenses away from the interior.