Orlando commemorated the start of its 25th season with special logos on the Amway Center floor for its first two home games, but those logos have moved.

The Orlando Magic opened the home portion of their 25th anniversary season on November 1st with two commemorative logos on the Amway Center floor--one on each of the left wings--as they took on the New Orleans Pelicans. Those logos were also present for their victory against the Brooklyn Nets two nights later. 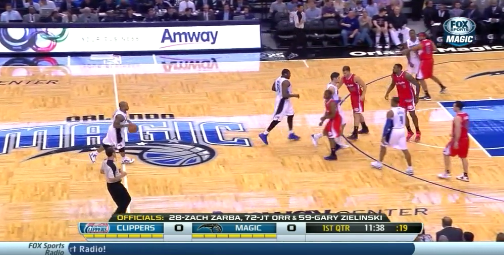 But the logos have relocated in the two home games since, as the embedded screengrab from the team's November 6th win over the Los Angeles Clippers demonstrates. Smaller versions of the logo now appear on the so-called "apron" which surrounds the floor instead of on the court itself.