Magic practice notebook: Tobias Harris says he is "a couple weeks" away

The Magic forward said Tuesday he's continuing to rehabilitate his sprained ankle, but has not done any on-court work yet.

Share All sharing options for: Magic practice notebook: Tobias Harris says he is "a couple weeks" away

The Orlando Magic took the Amway Center practice floor Tuesday in advance of their game Wednesday against the Milwaukee Bucks. Here's a rundown of the day's key stories.

Orlando has begun its season without Tobias Harris, the combo forward who led it in scoring a year ago, as he works his way back from a sprained ankle he suffered in the preseason. Harris said Tuesday he's "taking it real slow" in his rehab. 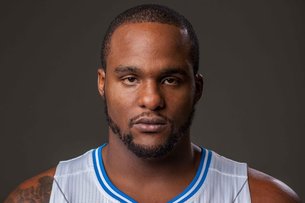 The Magic on Tuesday briefly addressed an incident involving Glen Davis which occurred over the weekend.

"It's getting stronger," he said of his ankle, "but we really haven't been doing too much on the court and stuff like that." The former Tennessee Volunteer said he's "doing a lot of cardio" for now.

The next step for Harris, who's currently limited to taking set shots and running on the elliptical machine, is doing on-court work: "Runnin' on it, see how it feels, and making some cuts and stuff like that will be comin' up next."

The Magic did not bring Harris on their recent two-game roadtrip, leaving him behind to continue his rehabilitation. Though he declined to estimate his health as a percentage, he did say he hopes to return soon.

"If I had to paint a picture right now, it'd be about a couple weeks [before returning]," Harris said.

The Magic yielded 60 percent shooting in their loss to the Boston Celtics on Monday (game recap), which defeat extended their winless streak to three games. Magic coach Jacque Vaughn isn't too concerned with his team's effort at that end of the floor, however.

"We've looked at the numbers, the amount of shots that people have taken and made in the areas that we want them to take and make shots, and unfortunately they've made shots," Vaughn said. "That's just a part of it. I think over time if we just improve on what we're doing, I think we should be in good shape."

Vaughn highlighted the performance of Celtics guard Avery Bradley, who scored 24 points on 10-of-15 shooting on Monday. "Avery Bradley made shots the other day," he said. "You pat him on the back and you say, 'good job. Good job defensively, good job making shots.'"

Bradley shot 7-of-9 on long two-point jumpers Monday. He entered that game shooting 14-of-36 (38.9 percent) on the very same shots. That fact reinforces Vaughn's point about players sometimes simply making shots that defenses want them to take.

Orlando has committed 57 turnovers for 60 opponent points in its three-game skid. Vaughn seemed much more concerned with taking care of the ball than he did with defense.

When we're in our set offense, making the simple pass is good enough. We just need to continue to repeat that simplicity. Jacque Vaughn

"That's something that puts more pressure on your defense," Vaughn said of his team's turnover problem, "because those guys are getting easy buckets, they're getting out in transition, and now our defense isn't set. So that's an area where I think, really consciously, we have to do things simple."

The second-year head coach went on to say, "When we're in our set offense, making the simple pass is good enough. We just need to continue to repeat that simplicity."