College basketball is back! This is an NBA community, but we can get down with some amateur hoops. A look ahead at a fantastic week in the college game.

Share All sharing options for: NBA Draft 2014 prospects to watch as NCAA basketball season tips off

The Orlando Magic have started their season admirably but most experts still project the team to finish with a high lottery pick. There's no problem in wishing the Magic a playoff birth as the team progresses through the 2013/14 season. But with rebuilding being the No. 1 priority, we should begin to look at some college hoops and the players who will jump to the NBA next season.

What to watch this week

More Kentucky vs. Michigan State coverage: A Sea of Blue The Only Colors

Kentucky and Michigan State will take the floor in the first game of the 2013 Champions Classic. A one versus two matchup to tip off the season? Yes, please. This game is amazing to college hoops fans for so many reasons:

The best part for Magic fans? This game is filled with NBA prospects.

Julius Randle is the big name here and I haven't been shy about saying that he could very well be the no. 1 overall pick in the 2014 NBA Draft, even over Andrew Wiggins. Randle is a 6-foot-9, 250-pound man child who attacks the boards, handles the ball like a wing, and can finish through traffic. Chad Ford said Sunday that he "played like an NBA vet."

Kentucky has the sexier prospects, but Michigan State isn't dry of NBA talent. Ford lists three Spartans on his current big board: sophomore guard Gary Harris (13), senior forward Adreian Payne (33) and junior forward Branden Dawson (47). Harris is the real prize here. He's a smooth wing who can score off the bounce and constantly looks to attack. Payne and Dawson are both strong, intriguing forwards but have upside issues that will keep them out of the first round.

Wait... What? We get two top-five matchups on the same night? Yup. Duke-Kansas features the two hottest high school prospects in the country in Andrew Wiggins and Jabari Parker. Before a foot injury nagged him in his high school year, Sports Illustrated called Parker the "best high school basketball player since LeBron James." Then Wiggins reclassified to the 2013 recruiting class, which dropped Parker to second . 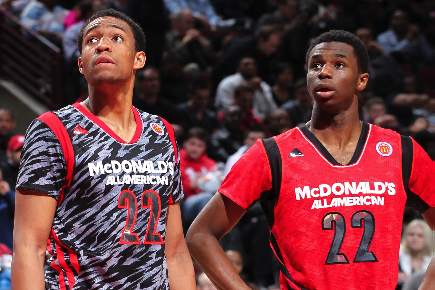 Parker looked fantastic in his first collegiate game against Davidson, registering 22 points and six rebounds on 8-of-10 shooting from the floor. He also knocked down all three of his attempts from behind the arc. Wiggins, who has sat atop nearly every mock Draft board for the past two years, coasted through his first game, scoring an easy 16 points and recording three steals. Wiggins will be unfairly scrutinized all season because of the unrealistic expectations placed on him, but he will dominate college basketball.

In a perfect world, Wiggins and Parker would both play all 40 minutes and guard each other every single possession on Tuesday. But that won't happen, which means we, as viewers, should cherish each trip up the floor that the two superstars square off against one another. Remember that time James and Carmelo Anthony faced each other on ESPN while they were still in high school? This game should echo that one, except the teams they play for are two of the most storied basketball programs in college hoops history. This is a big deal.

Also: Wiggins did this in his first game.

You should always take advantage of the chance to watch [Aaron] Gordon attempt to smash skulls.

Gordon has been called the next coming of Blake Griffin. I'm a little skeptical that there's any resemblance other than the jumping ability, but the comparison does speak to his athleticism. If you don't get anything out of this column, I hope you at least watch this video, where Gordon completely shatters kids who don't look like they belong in the same stratosphere as the 6-foot-8 forward. It's a high-school tape, so take it for what it is, but it's pretty glorious to watch Gordon attempt to rip the rim from its hinges on every single possession. He has no outside game to speak of and he's a little small as an NBA power forward, but you should always take advantage of the chance to watch Gordon attempt to smash skulls.

Neither of these games will be much of a contest, but they are both noteworthy.

Sophomore forward-center Mitch McGary and sophomore small forward Glenn Robinson III rank as Michigan's two big prospects. McGary busted onto the scene last NCAA tournament with 21 points and 14 rebounds against Virginia Commonwealth and 25 points and 14 rebounds against top-seeded Kansas. Robinson is a versatile forward who changed from power forward in his senior year of high school to small forward at Michigan. He's the Wolverines' best overall scorer and Ford ranks him 12th on the big board.

James Michael McAdoo is the big-name prospect for North Carolina. At one point experts regarded him as a potential top-five Draft pick but he stalled in his sophomore year and decided to return to Chapel Hill for his junior season. He's being overlooked a little but a big season would change that in a heartbeat. McAdoo scored in double-figures in all but four games as a sophomore and looks like he's developing his ball handling skills on the wing.