To break out, Maurice Harkless must improve as a jump-shooter

The 20-year-old forward is hoping to build on a solid rookie season.

Share All sharing options for: To break out, Maurice Harkless must improve as a jump-shooter

The 2013/14 NBA season draws nearer, and outlets that cover the league continue to roll out coverage to preview the year ahead. One such publication, HOOPSWORLD, posted a piece Monday looking at players who could "break out" and mentioned Orlando Magic forward Maurice Harkless as a candidate to emerge.

"Harkless spent the entire summer working on his game, not only with the Magic’s strength and conditioning coaches, but with NBA trainer Dan Barto and the coaches at IMG Academy," writes Steve Kyler. "Harkless is clearly shooting the ball better, as HOOPSWORLD spent some time with him this summer."

Harkless averaged 8.2 points, 4.4 rebounds, and 1.2 steals per game as a rookie and enjoyed a brilliant March, during which month he posted 13.1 points, 5.6 boards, and 2.2 steals. Still, there's room for improvement, particularly regarding efficiency: owing to poor marks from the foul line and three-point range, Harkless' True Shooting of 50.4 percent ranked fifth among the six rookies who logged at least 1900 minutes. 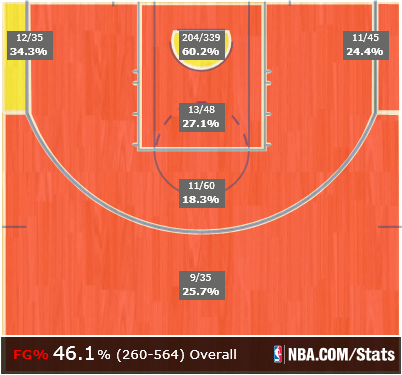 As a rookie, Harkless was effective at the rim and from the left corner, but his in-between game needs work.

To improve his game, Harkless has said during Magic training camp that he's built his body in order to better absorb contact and finish through it. In addition, he's overhauled his shot; reviewing film helped him realize that he was shooting from behind his head at times as a rookie, a release point which yields a flat, line-drive shot.

Watching Harkless shoot before Orlando's practices in training camp, it's clear that he's worked on lowering his release point. He now launches his jumper from just above his forehead and slightly in front of his face.

Developing a more consistent shot will make him more of an outside threat and could help Orlando, one of the league's worst three-point shooting teams, space the floor. Among the 224 players to take at least 150 shots outside 15 feet from the basket, Harkless ranks 213th in accuracy, with a 35 percent effective field-goal mark. To log "starter’s minutes at both the small forward and shooting guard spots this year," as Kyler says Harkless is expected to do, he'll need to become more reliable away from the cup.