In an interview, the Magic camp invitee dishes on his skills, his history in the NBA D-League, and what he has to do to make Orlando's opening-night roster.

For the first three entries in this series on Orlando Magic training camp invitees, we asked a blogger who covered a given player to shed some light on his skills and his chances of making the team. However, we're taking a different approach in this post spotlighting Mickell Gladness by going straight to the player himself. 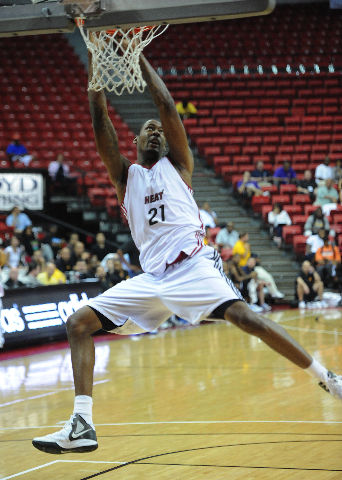 Evan Dunlap, Orlando Pinstriped Post: You're known as a shot-blocker. What are some other things you can do at both ends of the floor? I'm trying to get a sense of your overall game.

I know I can't be a one-dimensional player, just totally be a shot-blocker, so since college, I've tried to develop my overall defense as far as helping my team out [with] my pick-and-roll defense and just guarding my position.

OPP: You've spent some time in the D-League in your career. How has that helped your development?

MG: It's helped moreso in confidence and getting playing time. You can't simulate what you get as far as real game experience on the practice floor. It helped as far as that. And playing against guys that are, like, right on the door of getting in the NBA, or close to getting a good deal overseas... I mean, that's pretty good talent. That's pretty good competition that I would go against every night. As opposed to being on a practice squad somewhere, or overseas somewhere, this is totally different.

OPP: If things don't work out here, what do you think might be next for you?

MG: It's always a thing of... I don't like to focus too far ahead. If this is not the place for me, I'll always recollect and get with my agents to see what's next, what opportunities I have. Whether they be overseas or maybe another team.

OPP: What do you think you have to accomplish here, individually, to get to the final Magic roster?

MG: I've always been the type that, especially lately, just do what I can while I'm out there, and just let the rest just handle itself. I don't have control over everything. I've tried to control everything at one time, and stressed over it, and biting nails and everything, but that doesn't really help anything.

So, just do what I can on the court, give all my energy, show 'em what I can do as far as defensively and helping the team. Even offensively [too], being in open spots and getting my teammates open with pick-and-rolls and stuff. Just do what I can and let the rest handle itself.

Gladness' new teammates tend to agree with his self-assessment as a high-energy guy. "He gets after it," Maurice Harkless said. "He plays defense. He gets open, hits the open shot, finishes, gets the offensive rebound. He does the dirty work." Playing alongside a shot-blocker like Gladness gives Harkless confidence in defending the wing: "I feel like you can take more risks [defensively] when you have someone who can block shots behind you," he said.

Jason Maxiell, who knows from explosiveness, said Gladness is "very, very explosive." But Gladness' work isn't done, Maxiell said. "If he gains maybe 15 more pounds, then he'll be able to bang a little bit more with the big boys."