The Magic rookie will lace up Jordan sneakers in his first NBA season. 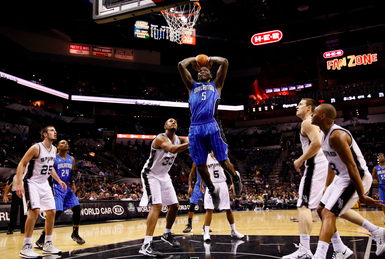 Like the man whose sneakers he now wears, Victor Oladipo is practically a living highlight film. Check out some of his best plays in a Magic uniform:
• Preseason buzzer-beater
• Monster slam against the Spurs
• His first NBA basket
• Cramming on Ronny Turiaf
All of Orlando Pinstriped Post's videos are available on this page.
Photo by Soobum Im, USA Today Sports

Oladipo joins Washington Wizards forward Otto Porter, and Charlotte Bobcats big man Cody Zeller as the newest additions to the Jordan brand. They were the second, third, and fourth overall picks in the Draft.

"We are excited to add Victor, Otto and Cody to the Jordan family," Michael Jordan said in a press release. "As we continue to expand and improve our performance product, these young players will be a big part of our efforts around the game of basketball."

Oladipo said at Magic Media Day that he had signed with Jordan. According to the company, he will begin the season wearing the Jordan Prime.Fly shoe in games.

The last Magic player under contract with Jordan was swingman Quentin Richardson, whom the team waived after training camp in 2012.

In the first two games of his NBA career, Oladipo has tallied 26 points, nine rebounds, six assists, a steal, and a block. He's shooting 36 percent from the floor.