The Orlando Magic will have one roster spot available, assuming Hedo Türkoğlu's buyout goes as planned, Romero Osby makes the team, and Kyle O'Quinn isn't waived before the start of the season. And, in my opinion, that last spot is Kris Joseph's to lose. The Magic are thin at small forward and Joseph, 24, is just young enough that he may have some potential left to max out.

In order to learn more about the second-year swingman, I turned to Sean Keeley (on Twitter: @NunesMagician) of SB Nation's Syracuse blog, Troy Nunes Is an Absolute Magician.

Tyler Lashbrook, Orlando Pinstriped Post: There's not a whole lot known about Kris Joseph as an NBA player as he appeared in just 10 games in his rookie season. What does he bring as a basketball player on both sides of the floor?

Sean Keeley, Troy Nunes: Kris is a great athlete who was always able to create offensively when he was at SU. He's not the type of guy to demand the ball but if you can get it to him on the wing, he's got the speed and a good-enough shot to make something happen. A really good team player, Kris improved dramatically on offense and defense over his college career and probably does his best work in transition (a huge part of SU's offense while he was there). Physically, he's not that imposing, so there's concern as to whether or not he can body up on a nightly basis, but I'm guessing he's been bulking up since going pro. 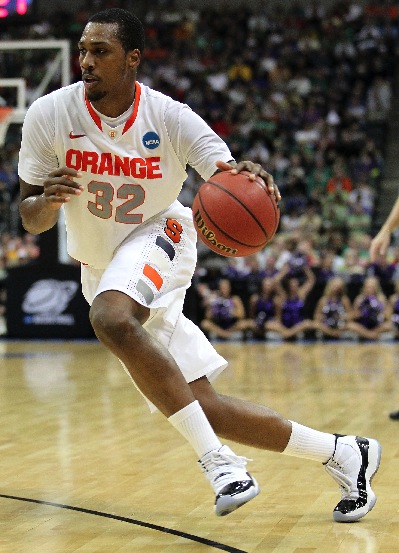 TN: He has the range though I'm not so sure you could call him any kind of dependable deep threat. We didn't really look for him to handle that role, though he had his great moments from three-point range. Chances are he's going to have to rely on his outside shot more in the pros since it's going to be tougher for him to get inside. As far as I can tell, he's capable, but I don't know how dependable.

OPP: It's tough to evaluate individual Syracuse players on defense because, as you know, they play that stingy zone defense. But is he the type of player who can sit down and guard one-on-one or is he solely an offensive player?

TN: I think Kris is certainly capable but I don't know how well he'll be able to measure up in terms of size. He might get pushed around if he finds himself underneath the basket. As for the perimeter, I have no doubt he can keep step and stay in a guy's face when he has to. The more he can stick to the perimeter, the better off he's going to look on defense.

OPP: The Magic are a team stacked with power forwards, but there isn't a whole lot of depth at the small forward position. If Joseph has the skills to play on the wing offensively and guard the position defensively, then that really helps his chances to land a roster spot. Is he a small forward? Or is he better served when playing the power forward?

TN: Small forward, for sure. Kris's game is more finesse than power, especially on the next level. He's the kind of player you're going to want as a 3rd or 4th option from the perimeter or helping distribute the ball inside. His best chance in the NBA is going to be in that kind of role, where he's certainly not the star but he's an important cog in the machine.

OPP: Realistically, is Joseph an NBA player? Or do you think he's more likely to have a career overseas?

TN: My gut tells me his NBA days are numbered. Unfortunately, I think he kind-of leveled off in terms of growth between his junior and senior years at Syracuse and he's just not taking the next step that's going to keep him on an NBA roster past this season. I wouldn't be surprised at all to see him end up having a really solid overseas career instead.

Big thanks to Sean for all of his help. You can follow him on Twitter at @NunesMagician.