A look at the developing stories from Tuesday night's regular-season opener.

The Orlando Magic were without three core players in Tuesday night's opening game against a very good Indiana Pacers team, but lost by just 10 points. Orlando got off to a slow start but led by four at halftime before giving up 29 points in the third quarter. But, hey, they at least covered the 12.5-point spread--thanks to a Maurice Harkless three-pointer on Orlando's last possession--so that' good.

Andrew Nicholson nearly broke Basketball Twitter with an awe-inspiring second quarter. Nicholson scored 12 points on 5-of-5 shooting in the period.

During that stretch, he was nearly unstoppable. He drained two corner threes, hit a face-up jumper from the left baseline, sunk a 20-footer off a pick-and-pop, and finished a 360-degree layup in traffic. He ended the half with 18 points on 8-of-9 from the field

Vaughn said the decision to sub Nicholson out was one based on matchups.

But a weird thing happened. Magic coach Jacque Vaughn subbed him out with 4:51 left in the second quarter and didn't put him back in until the start of the fourth. When he returned, he wasn't the same. He never got his rhythm back and finished the game with the same amount of points he had in the first half.

Vaughn said the decision to sub Nicholson out was one based on matchups. "I thought Max [Jason Maxiell] was unbelievable against David [West] and Frank Vogel ended up playing David West the entire third so I thought that matchup was great for us.

"Andrew scored all of his points on [Luis] Scola. Scola wasn't in the game so it was on me to make that call and I did."

Maxiell was 0-of-5 from the field, but his interior defense was superior to Nicholson's. Nicholson struggled all night defending the interior. Vaughn was left to pick his poison: he could keep Maxiell in and sacrifice offense for defense, or he could put Nicholson in and give away the interior. That's a tough call to make.

Indiana had 18 blocks Tuesday night and I'm told that's a lot. Some of that had to do with the Magic driving right into their defense, but most of it was from the Pacers' team length. Roy Hibbert and West are excellent both in the pick-and-roll and in camping the lane and protecting the rim.

The biggest play came mid-way through the third. Jameer Nelson broke down his defender off a Nikola Vucevic ball screen and attacked the paint. Hibbert stepped up to help and Nelson dumped the ball off to Maxiell on the baseline. Maxiell rose to cram the ball in, but Hibbert recovered and met him at the rim, stuffing him completely with his left hand.

Vucevic struggled the most against the interior presence of Hibbert and West. He finished with eight points on 10 shots and turned the ball over five times. He didn't get to the free-throw line once and just looked outmatched on both ends of the floor by the Pacers' duo. Indiana outscored the Magic by 22 points with Vucevic on the floor, the worst plus-minus ratio of the game for any player on either team.

The 7-footer can't dwell on this game too much; Wednesday night the team travels to face the Minnesota Timberwolves where Vucevic will face one of the toughest centers in the league in Nikola Pekovic. A West-Nikola Pekovic back-to-back doesn't sound like any fun.

Oladipo returns to Indiana to an ovation

It was an emotional night for Magic rookie Victor Oladipo. Before the game, an entire section of fans sporting Indiana Hoosiers gear and Orlando Magic No. 5 jerseys greeted him. He said he bought 18-20 tickets for friends and family. Even his former college coach, Tom Crean, attended.

"It's amazing to have a fan base like I do," Oladipo said. "They're all over the world. We go city to city and there's at least two Hoosier jerseys in the arena, so it's amazing to be a part of something bigger than yourself."

Most impressive is [Victor Oladipo's] ability to throw pocket passes when the screener pops out for a jumper. Both of his assists came off those plays.

Oladipo didn't have the best game that he'll have this season: he scored 12 points on 11 shots and didn't stuff the stat sheet as he had in the preseason. But he played good defense--for the most part--and he looked extremely comfortable in the pick-and-roll. Most impressive is his ability to throw pocket passes when the screener pops out for a jumper. Both of his assists came off those plays.

"I'm learning when to be aggressive, not too aggressive," he said. "I have to pick my spots. This was my first game. I just got here. It's going to take time."

"It's frustrating because I want to be great and help my team win so much. I just have to patient." 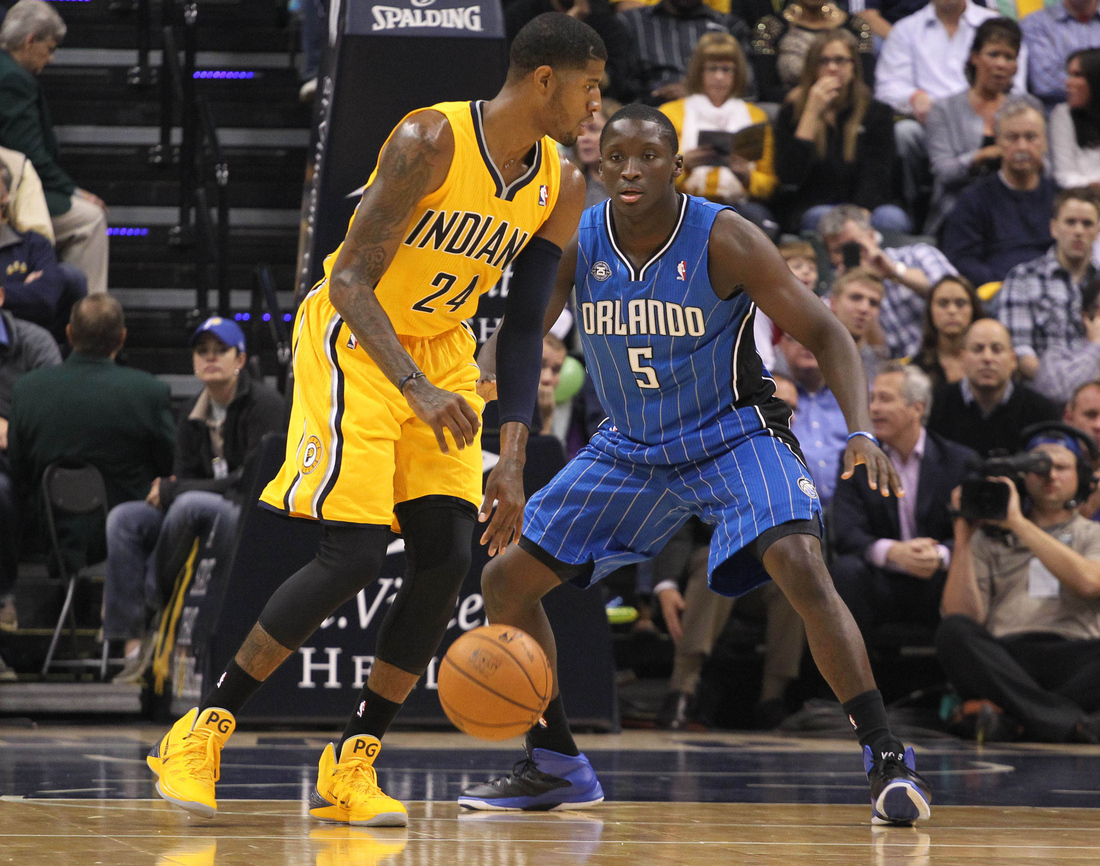 Were there people complaining about Paul George $90 million contract? I can't remember. They really shouldn't complain about it, though; George is worth every penny.

I'm not basing that off just this game, either. George is a star. He scored 24 points on 16 shots, grabbed six rebounds, dished five assists, and blocked three shots against the Magic, and it was just another day at the office.

He got Harkless in foul trouble early. He bothered Arron Afflalo when the former UCLA Bruin slid to the small forward spot. His handle looked smoother. His jumper looked purer.

"He's a great player," Maxiell said after the game. "He's solid -- doesn't try to do too much. He'll probably be an All-Star again this year."

Yeah, he probably will.

"The great thing about the NBA..." Oladipo paused. "If I was in college, I'd have to wait two more weeks to play a game. In the NBA, in less than 24 hours you're playing again."

Harkless agrees with his new teammate.

"That's the best part about being in this league, you know, there's always another game," Harkless said. "We'll have a short memory, tomorrow we'll wake up and have another game."

Vaughn called the season a "marathon."

"This is great for us," Vaughn said. "To be able to learn from tonight, let it go, lace 'em up for tomorrow."

Magic at Pacers: The start of a new season