In a Sports Illustrated story, Orlando's coach earned kudos for the way his team performed in his first season on the job.

Sports Illustrated has rolled out its 2013/14 NBA preview, one staple of which is its "scout's take" on every team in the league. The anonymous scout who wrote up the Orlando Magic makes some good points in his story, chiefly that opponents will continue to dare Victor Oladipo to shoot from the outside in pick-and-roll situations. 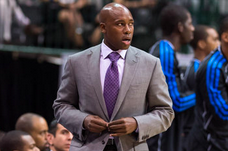 But the most interesting observation this scout made was that the Magic, despite going a league-worst 20-62 in their first year with Jacque Vaughn as coach, played hard throughout the end of that season.

"They weren't very good, and they were bound to struggle defensively with so many young players, but they competed every night," the scout writes. "They didn't have the personnel, but they played hard. They still tried to move the ball late in the season, when they were toast. They were not a one-man show. That's a credit to Vaughn."

Magic fans, at least the ones who comment in this space, tend to be optimistic about the team's roster and Rob Hennigan, the man who built it. But their opinion of Vaughn is lower, and a popular topic among regular readers of this site is how long he'll last before Hennigan makes a change. Throw in the recent history of coaches hired to lead rebuilding efforts--SB Nation NBA editor Tom Ziller has the rundown--and it's fair to wonder what Vaughn's Orlando future might look like.

I found it interesting, then, that the scout attributed to Vaughn many of the positives--selfless play, consistent effort level--which Magic fans more readily attribute to Hennigan or the players themselves. This sort of outside perspective is welcome and refreshing.