As the 31-year-old enters his 10th season with the Magic, the team is focused on keeping him healthy and productive.

In the first year of the Orlando Magic's post-Dwight Howard rebuild, Jameer Nelson did more work than ever, but saw diminishing returns. The veteran point guard, who turned 31 in February, logged 35.3 minutes per game, a higher workload than he saw even in the team's storied NBA Finals run four seasons prior, a campaign in which he averaged 31.2 minutes per night.

As the Magic move forward in their rebuilding effort, they must contend with their longest-tenured player aging.

And on a Magic team without much offensive punch, Nelson found himself having to shoulder the scoring load, quite often by letting fly from three-point range: Nelson uncorked 6.3 three-pointers per game--a full 45.5 percent of his total shot attempts--but converted at just 34.1 percent. As SB Nation NBA editor Tom Ziller noted, Nelson was one of four high-volume three-point shooters to connect at a rate worse than the league average, though he at least had an excuse: Orlando didn't have any other competent outside shooters, apart from J.J. Redick before the trade deadline and Beno Udrih after it, so a Nelson triple-try was sometimes the Magic's best offensive option on a given possession.

Perhaps due to that increased workload, good health eluded Nelson in 2012/13, as he missed 26 games with various injuries. The Magic's all-time assists leader stayed healthy in each of Orlando's prior two seasons, playing in 89.9 percent of its games, but has otherwise earned a reputation as a brittle, injury-prone player.

As the Magic move forward in their rebuilding effort, they must contend with their longest-tenured player aging. And not all NBA players age equally well: players of Nelson's size--he's listed at 6-foot-0 and 190 pounds--often begin declining around his present age. 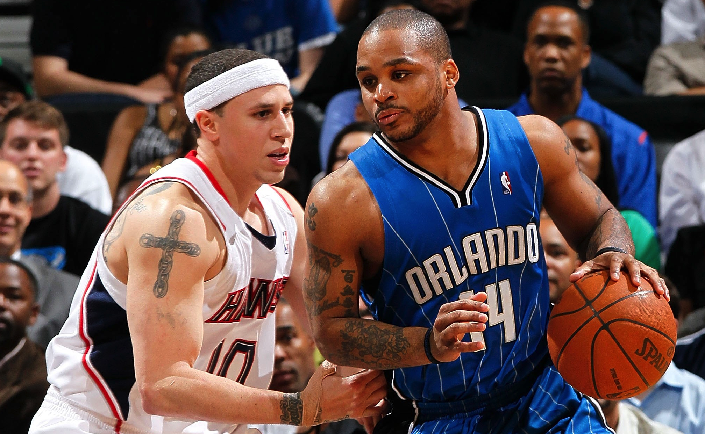 Jameer Nelson's age-30 season echoed Mike Bibby's, and not in an encouraging way.

Bibby declined sharply in subsequent seasons, and he was out of the league by 34. Nelson is under contract through his age-32 season, but has only a $2 million guarantee, according to ShamSports.
Photo by Kevin C. Cox, Getty Images

For perhaps the best illustration of this idea, look at the career of journeyman point guard Mike Bibby. Listed at 6-foot-1 and 190 pounds, Bibby played 13 NBA seasons before contract offers dried up. He made his name as a shoot-first, pick-and-roll point guard on Rick Adelman's fun, championship-contending Sacramento Kings teams of the early aughts.

Once the Kings decided to rebuild, they shipped him to the Atlanta Hawks, where age began to set in and Bibby became a spot-up specialist. At 29, Bibby's free-throw rate cratered as he lost his ability to turn the corner on pick-and-rolls and breeze his way to the basket. By 30, nearly half of his shot attempts came from three-point range, and in his final NBA season, at age 33, a full 68.5 percent of his shot attempts were threes.

There's nothing inherently wrong with a point guard who specializes in shooting from the outside. If anything, the Magic need to launch more threes, given that it's becoming increasingly difficult to build a top-10 offense without stocking up on ranged shooters and reaping the rewards of the spacing they create. But the fact is that Bibby aged so gracelessly--particularly on the defensive end of the floor--that he became unplayable, despite his outside marksmanship, by age 32. Orlando needs Nelson to avoid a similar fate, and the team is rightly concerned with monitoring his workload.

A plan to move forward

"We want him to be healthy," Orlando coach Jacque Vaughn said during training camp. "That's his challenge: staying healthy the entire year." To that end, Vaughn said, the team will be "managing [Nelson's] minutes" as the season progresses, though he declined to specify how the team intends to accomplish that task.

We want him to be healthy. That's his challenge: staying healthy the entire year. Jacque Vaughn on Jameer Nelson

Fortunately for Vaughn and his club, the Magic now have viable options at point guard behind Nelson. Vaughn cited Orlando's lack of depth there in 2012/13 as one reason for Nelson's heavy workload. "Our depth is a little different [this year]," Vaughn said, saying that the additions of Ronnie Price and Victor Oladipo, plus the return of E'Twaun Moore, will help his team.

Oladipo's play at point guard is perhaps the biggest long-term story for Orlando in the year ahead, given the potential long-term, franchise-changing impact a successful season there could have. The former Indiana Hoosier made a name for himself as an ace defender at shooting guard, but the Magic intend to play him at lead guard for extended minutes. If the move pays off, Orlando has itself a two-way, 6-foot-4 dynamo of a guard prospect who can anchor its team moving forward.

One can already see that improved depth at work in Nelson's limited preseason exposure: he's been a healthy scratch for three of the Magic's seven exhibitions to date, and is averaging just 21 minutes per game overall. When the season begins on October 29th, he should be well rested and ready to play, and not just because of his light work in the preseason. 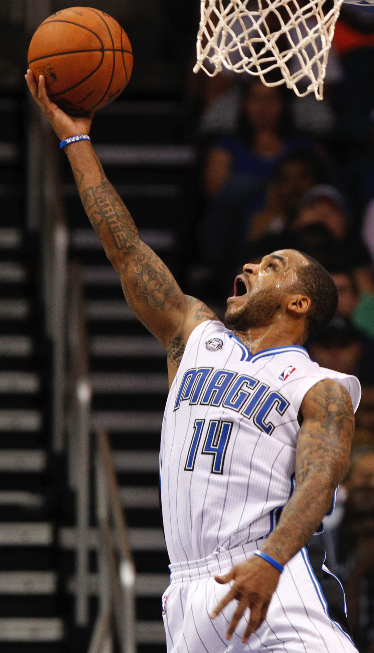 "I tried to invest into my game and my body a little more [in the offseason]," Nelson said during training camp. "Did some things to strengthen the areas that I need to strengthen." Part of that new routine meant running on a treadmill for several miles a day, a way to improve cardiovascular health while reducing the strain on the muscles and joints in his lower body.

Notably, another part of that routine was not having a routine at all: "Playing a contact sport and being physical like I am, you're gonna get nicks and nacks," Nelson said. "At one point, you have to sit down and let your body rest, and I did that this summer."

Nelson can't keep from aging, but he and the team can at least work together to mitigate the way it manifests itself on the court. As a well-respected presence in the locker room, Nelson adds value beyond his play, and that aspect of his personality is more important than ever as the Magic--the league's fifth-youngest team, according to Ed Kupfer's research--transition into a new era.

"I think it [leadership] is needed a little more now," Nelson said. "Most of these guys [in the locker room] haven't gone through anything. They went through last year or the year before, but they're just now figuring out who they are as players."

And Nelson isn't concerned about the number of minutes he gets; for him, it's about making those minutes count. "My job is to play the minutes that [Vaughn] gives me," he said. "Go out there, earn minutes, and play 'em, night in and night out."

Nelson's new focus on his body, coupled with Orlando's measured approach to his minutes, portend a more productive and effective season on the court, one in which he can transition into a more complementary role beside Oladipo and the Magic's other young prospects.

Next Up In NBA