A rundown of the top stories from the second day of Orlando's training camp.

The Orlando Magic reconvened Wednesday for another day of training camp. Coach Jacque Vaughn said before the day's session that he reviewed film from Tuesday's drills and scrimmage and was ready to go even harder. "I was pleased with the conditioning so I think we're at a level where we can get up-and-down a bit," he said.

Here are the top stories to emerge before Wednesday's session.

Eight-year veteran Jason Maxiell only joined the Magic as a free agent in July, but his teammates already have a healthy respect for him. It's clear that the wrecking ball of a big man has already made an impression on the young Magic squad.

Vaughn said that he's trying to use Maxiell to teach his charges about what it takes to compete at the NBA level.

"I stopped a session to show our younger guys his physicality and aggressiveness in a drill," Vaughn said. "Those are the things that, for us, manifest more than the production on the floor. The things behind the scenes, he's gonna be great at."

Tobias Harris said that Maxiell is the only player on the Magic stronger than he is. When asked about Maxiell's maximum bench press, Harris said, "I don't even wanna know. All I know is he be throwin' the weights in there."

Kyle O`Quinn thinks he can draw inspiration from Maxiell, whom he'll likely battle for playing time in the regular season. "I can learn a lot from a guy like that [....] With the physicality he brings, he keeps a job. It shows that teams need it. Him comin' here is gonna help us as we move forward."

Vaughn wants, and expects, consistency from Maxiell. "Max has to be ready when his number is called," he said. "I think that's the advantage of having veterans."

Vaughn said that he'd like to see Harris become a more efficient player in his first full season with the Magic. Harris dazzled in 27 appearances after Orlando acquired him from the Milwaukee Bucks, averaging 17.3 points per game, but with a mediocre True Shooting mark of 52.4 percent.

What should we expect from Tobias Harris? 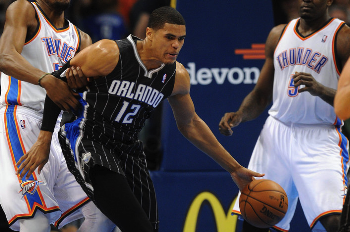 "I think that it comes from the point of shot selection and having a patience throughout the course of the game," Vaughn said of how to make Harris more efficient. Harris never had a chance to play alongside Glen Davis, and he only shared the floor with Jameer Nelson for 378 minutes in 13 games and Arron Afflalo for 350 over 10, and Vaughn said that being able to share the floor with them could improve Harris' game. "The better players you have [with you], the better chances you have of finding success also," he said. Finding lineup combinations that work for Harris is one of Vaughn's goals.

For Harris' part, he doesn't see his teammates as an issue. "It's an adjustment, obviously, when we're all playing together," he said, "but I'm gonna find my way on the basketball court. It doesn't matter who's playing."

Harris is indeed listening to his coach's advice, but he also has a wealth of former pros, including Mel Daniels and Dale Ellis, whom he can consult. He spoke to NBA Hall-of-Famer George Gervin, whom his father Torrel served as an agent, over the summer and took some lessons from him.

"One thing he preached to me is, 'just because you got the green light doesn't mean you gotta shoot every time,'" Harris said. "'It means you gotta take the shots that you can make and that you will make.'"