Here are the biggest stories from the first day of practice. 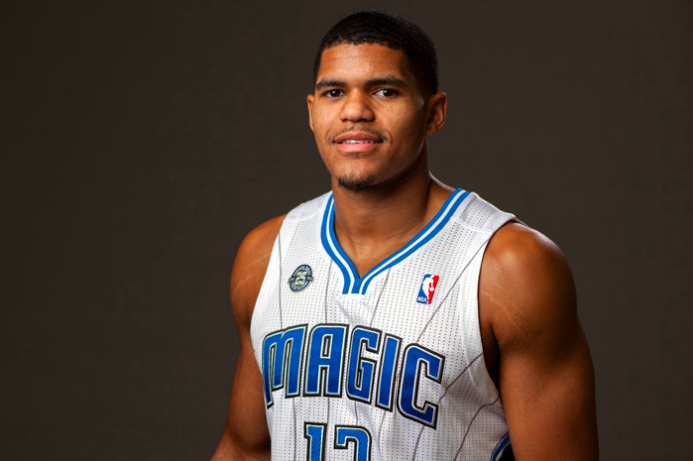 It's early, but Magic combo forward Tobias Harris says for the moment, he's playing more small forward than power forward. "I'm just going with that," he said of playing at small forward. "I feel comfortable at both these positions so I just look to embrace it and get better at both of them each and every day."

Harris will leave it up to Vaughn to decide where to play him. Over the summer, he worked on his body so he'd be more comfortable at small forward and power forward. Though listed at 226 pounds, Harris says he's at 240 pounds, which is his playing weight from a year ago. But there's a twist: Harris said he lost "weight"--I believe he meant "fat"--but added muscle.

"I'm more toned and [have] less body fat," Harris said. "It just makes you more a more explosive player, being able to guard threes and guard fours and still be as fast."

The Magic, who are embracing positional versatility, hope that Harris can capably man both positions in his first full season with the team.

Jameer Nelson and Glen Davis served as co-captains for the Magic in 2012/13. Vaughn said Tuesday that he hasn't settled on captains for this team, because he first needs to settle on what the term "team captain" means."

"We're going to diagnose our captainship, but there's something to be said about a collective responsibility as well."

It's not a surprise that Vaughn endorses "collective responsibility," as it's in line with Orlando's team-first philosophy, a way of thinking which starts with management and has worked its way down to the roster level.

Players go hard on Day One

Vaughn designed the first day of work to be intensive, both to set a tone for a season of hard work but also, more practically, because the team will not reconvene in the afternoon for a second practice.

Vaughn said he was pleased with the players' "conditioning level" and "effort." Nelson was more tempered in his remarks, calling the session "okay" but also "a better day than expected."

Harris, in his first training camp with Orlando, was pleased. "We went hard with a lot of intensity," he said. "That's all Coach could ask for. We'll just rest our bodies and get back to it tomorrow, whether it be a one-a-day practice or a two-a-day practice. As long as we get better as a team, that's the main goal right now."

Orlando won't have its first two-a-day practice until Thursday, which news Maurice Harkless will likely welcome. "I'm gonna go home and go to sleep," he said after his first training-camp practice at the NBA level. Harkless sat out his rookie training camp--he could only shoot set-shots and was not allowed to jump--because he was recovering from hernia surgery, and he didn't make his NBA début until late November.