Maurice Harkless, DeQuan Jones, and Andrew Nicholson have all had their moments as rookies, but they've yet to earn a consistent role in coach Jacque Vaughn's rotation, as this Google Motion chart illustrates.

The Orlando Magic are a rebuilding team that relies on its veterans to remain competitive. Starting center Nikola Vučević and reserve guard E'Twaun Moore, both in their second seasons, are fixtures in coach Jacque Vaughn's rotation, but the team's other youngsters haven't played nearly as frequently or regularly as those two players.

Magic fans who want to see more of the team's rookies, including Maurice Harkless and Andrew Nicholson, have questioned Vaughn's rotation throughout the season. For example, Harkless made 20 consecutive starts from November 21st to December 29th... and then didn't play at all for two straight games before ultimately returning to the lineup in a reserve role.

An injury to Arron Afflalo gave Harkless an opportunity to start against the Brooklyn Nets on Monday, which opportunity Harkless seized: the Queens native scored 16 points in 34 minutes to record career-highs in both categories. " Bench him again before he learns how to play any better!" said longtime Orlando Pinstriped Post commenter eltharion_doa.

Coinciding with Harkless' initial benching, Vaughn promoted rookie swingman DeQuan Jones to the starting lineup for the Magic's next 10 games. He's since returned to the bench and appeared in just two of Orlando's last four games.

To better visualize the unpredictability of Vaughn's rotations, OPP created an interactive Google Motion chart that shows the playing time for Nicholson, Jones, and Harkless on a game-by-game basis. Access the chart by clicking the image below: 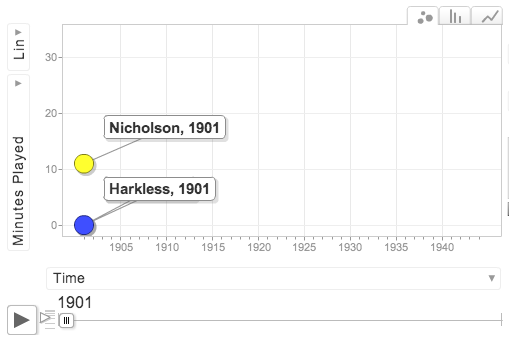 By default, the chart displays the playing time for Harkless, Jones, and Nicholson, though you're free to toggle which players appear by using the check-boxes on the right side of the chart.

What do you make of Vaughn's usage of the rookies? If you could pick just one youngster to average a consistent 20 minutes per game for the rest of the season, whom would it be?

Orlando Pinstriped Post is indebted to Rob Mahoney, whose Google Motion chart on the Milwaukee Bucks inspired this story.