With a tip of the cap to Bullets Forever, Orlando Pinstriped Post walks its readers through some of the new features of SB Nation United.

One of the most dramatic changes in the SB Nation United redesign is the addition of the cover, a flexible design element at the top of each page which enables site managers to highlight one, three, four, or five stories depending on the site's specific needs. Taking a cue from Bullets Forever, I wanted to walk you, the Orlando Pinstriped Post reader, through the thought processes that drive the choices I make with the cover, and to address some of your concerns about it.

First--and I want to make this point clear at the outset--I will try to ensure the cover only shows fairly recent content. It won't necessarily always show stories in reverse chronological order, an arrangement to which you have probably become accustomed here and at other websites. One reason for keeping a story in the cover for a few days, even after other stories have been published, is that it may be a longer feature that I believe still merits attention.

The section below the cover is known as the river. I will do my level best to present stories in the river in reverse chronological order, and if necessary I will talk more about the river in a later post.

Essentially, I want to allay any fears you may have that you won't be able to keep track of what's new and what isn't. With some exceptions, the stories you see in the cover will be the newest content on the site.

Let's now take a look at each of the five cover options at my disposal, and when I may choose to use them. 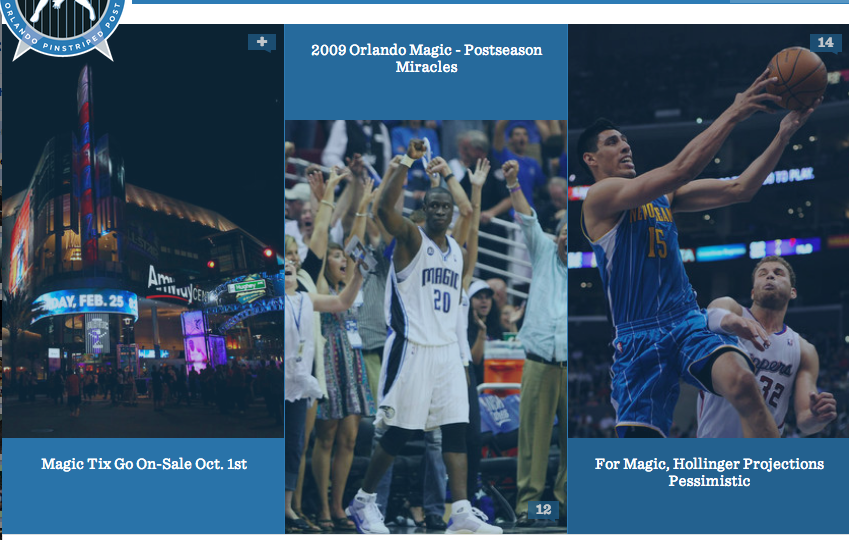 This cover layout, which I've used since the United redesign went live, features three stories and gives each the same amount of real estate. I anticipate using this layout for much of the offseason, as bigger stories--the kind we'd really want to highlight--are few and far between this time of year. 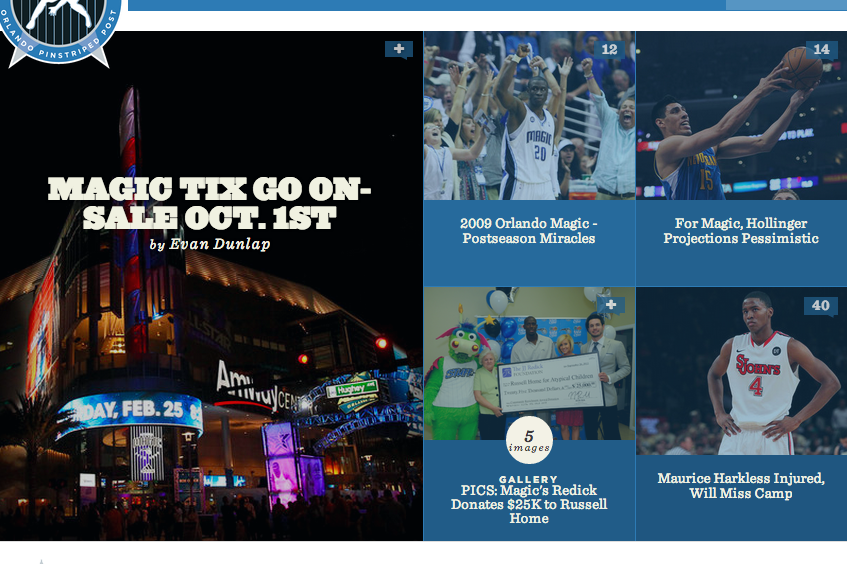 The five-up layout stands in stark contrast to the tryptic. As the name indicates, it features five stories, instead of three. In addition, it highlights one story in particular. I envision using five-up frequently when the season is in full swing, with a StoryStream about the Orlando Magic's most recent game likely getting the prime spot. Stories from daily coverage would occupy the other four slots. 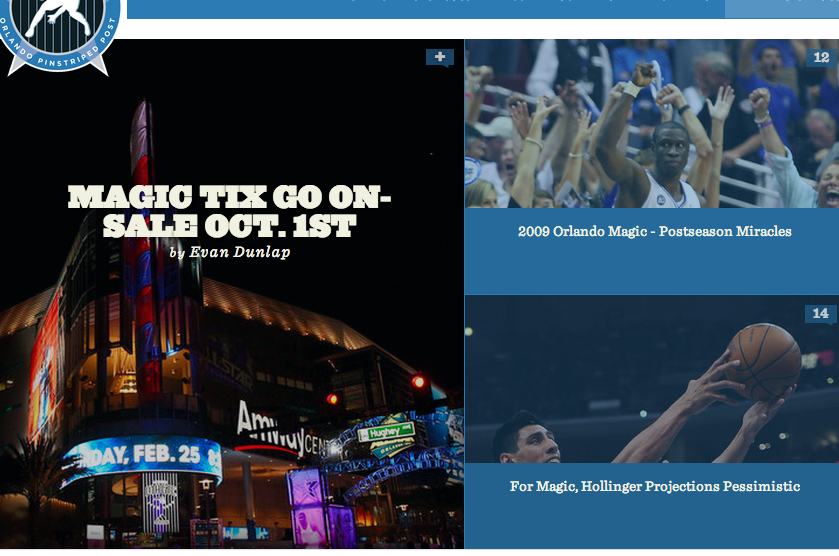 The three-up layout is the five-up's little cousin. The most important story--think game coverage, or maybe a feature of which we're particularly proud--gets the prime spot, and two other recent stories surround it. 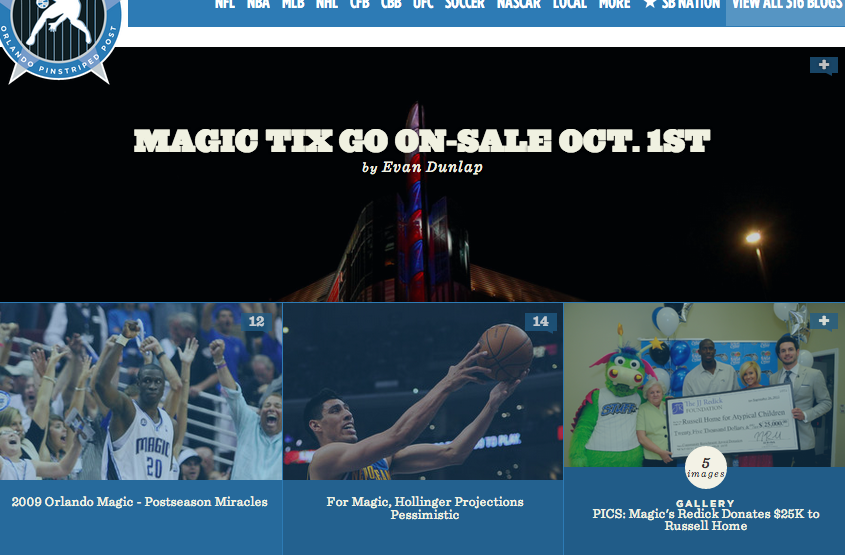 The four-up option might be our most dramatic, and I'm still sussing out how to use it the best; I welcome your suggestions. As you can see, the four-up cover features one story in a banner, of sorts, with three other ones spaced below it. Four-up might be best suited for game coverage, but at this point I prefer five-up for that purpose. 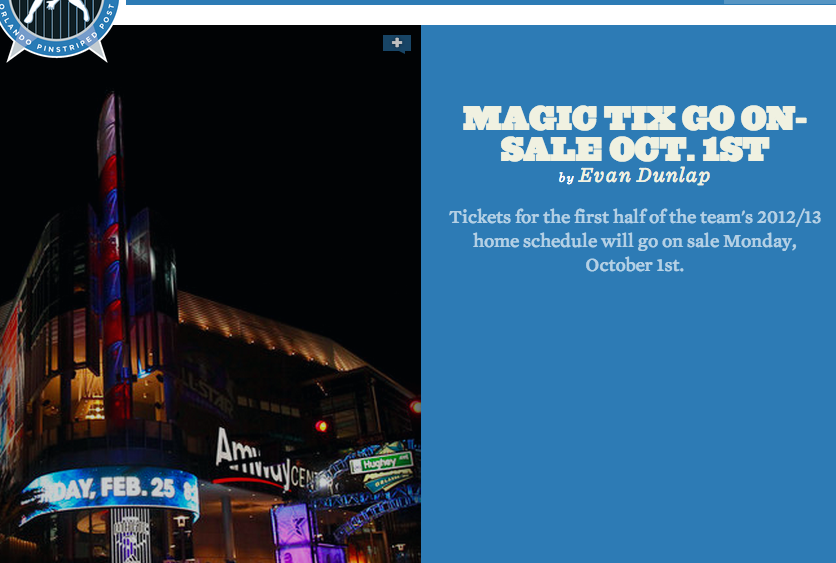 One-up is the White Whale of SB Nation United covers; I'll use it sparingly to highlight the biggest and most important stories. If Ajeeta or Mike writes something particularly tremendous, I'd consider featuring it in the one-up, for example, so it commands readers' attention.

And, on a related note, I'd like to assure you that SB Nation is indeed sensitive to your concerns about the United redesign. If you have any questions or concerns for the tech team, please contact them at support@sbnation.com. The United relaunch is something we're all sort of going through together--and I'm speaking very inclusively when I say "we."