Orlando Magic Back on Track after Losing Six of Eight Games

Share All sharing options for: Orlando Magic Back on Track after Losing Six of Eight Games

As recently as January 30th, the Orlando Magic's season looked to be in the tank. The team had lost six of its last eight games, dropping to 12-9 after a 10-3 start. Though not in danger of falling out of playoff contention--not in the woeful Eastern Conference, Orlando nonetheless had the look of a team that'd struggle to win even one postseason game. During that stretch, the team shot 38 percent from the field and committed almost 17 turnovers per game.

But in the weeks since, Orlando's managed to reverse course. It's won eight of 10 games, and the only losses came in overtime to the Los Angeles Clippers and Atlanta Hawks, two talented, playoff-bound teams. Excepting their rough patch, Orlando's 18-5 record would put it on pace for 64 wins in an 82-game season.

What factors contributed to Orlando's rough patch? How have the Magic turned their season around? These questions, and more, commanded Orlando Pinstriped Post's attention.

The most sensible way to attack this problem is to examine Orlando's four-factors splits during those three aforementioned periods in its season. We'll take a look at the data in chart form. First, the offense: 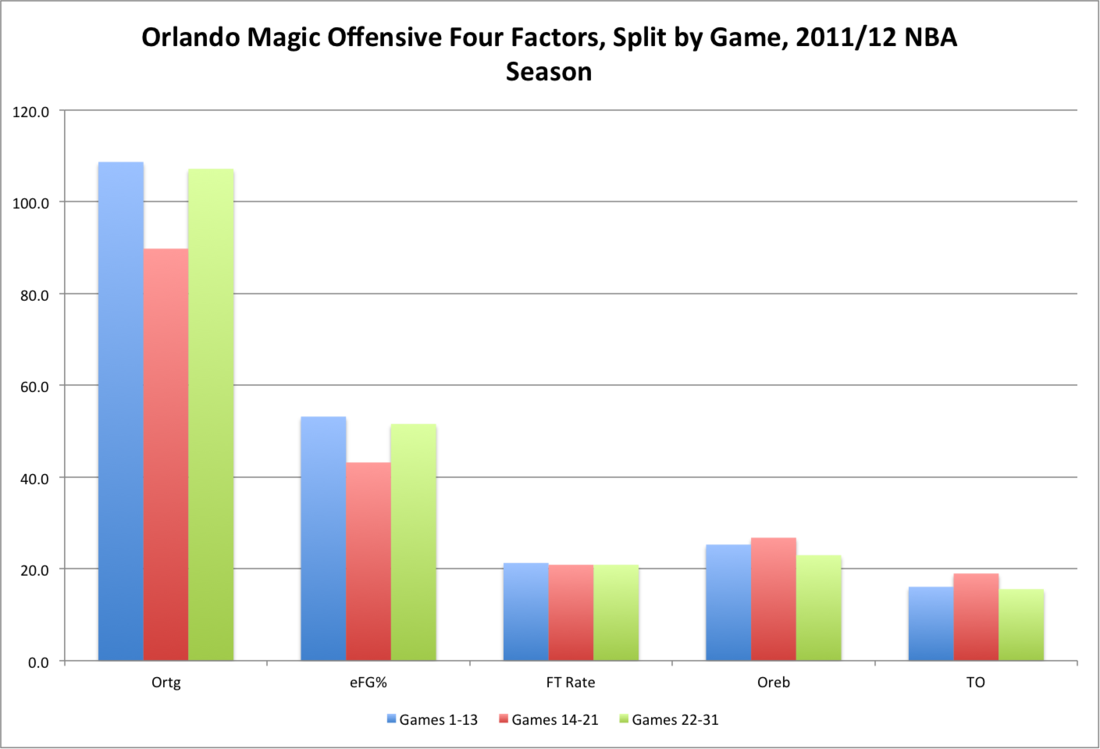 Orlando's offense tanked in a major way during the team's 2-6 stretch, averaging a putrid 89.8 points per 100 possessions. For some perspective, no team in the three-point era has ever posted an offensive rating worse than 92.2, so the Magic were on a historically bad pace. What the data in the chart help us do is diagnose the reasons for Orlando's sudden inability to score. Foul-drawing remained constant, and offensive rebounding improved, so they aren't to blame. But a sharp decrease in shooting, coupled with a spike in turnovers, contributed to the Magic's offensive ineptitude during that span.

The turnovers are particularly troublesome: the Magic coughed the ball up on 19 percent of their possessions from January 18th-30th, meaning nearly one-in-five of their trips up the floor resulted in a turnover.

Orlando dug itself out of that hole simply by shooting better and committing fewer turnovers, returning those stats to roughly where they were prior to the awful streak. About the only concern for the Magic's offense now is their offensive rebounding, which is lower than it's been all season.

Did defense contribute to Orlando's 2-6 stretch as well? Let's take a look: 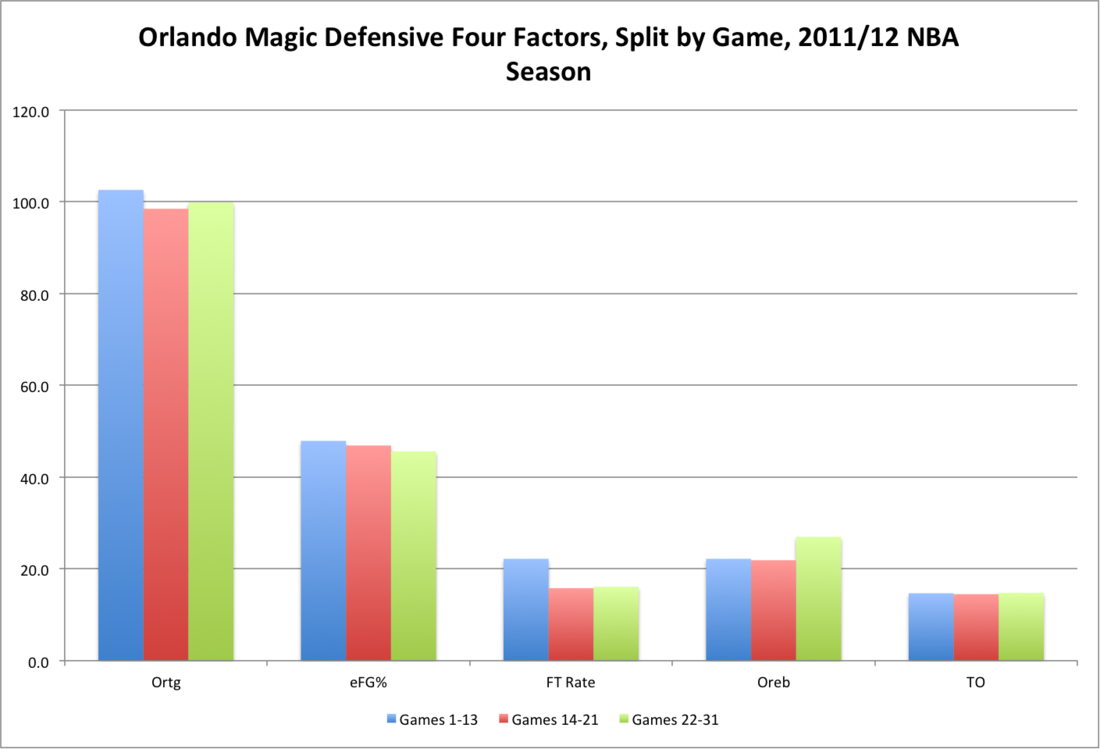 To answer the above question: no. The opposite, in fact; the Magic played championship-level defense during their rough patch, and yet they were outscored by an average of 7.75 points per game anyway. If anything, the stout defense they played in defeat only further underlines how horrid their offense was.

If one writes off the games Orlando played January 18th-30th as a fluke--and I certainly put more stock in 23 games' worth of data than I do in eight games' worth--than the team's outlook is much rosier. The team's offensive rating of 108 would rank behind only the Miami Heat (109.6), Chicago Bulls (108.3), and Oklahoma City Thunder (108.3) league-wide.

If the Magic can maintain this pace, they should wind up hosting at least one playoff series, and could find themselves in championship contention. We'll get a better idea of what this team's got fairly soon, however, as Orlando plays eight of its next 10 games away from Amway Center, including road dates against Miami, Chicago, and the Atlanta Hawks.