The five-year veteran has shifted roles from a supporting player to a featured part of Orlando's offense, and perhaps not for the better.

With the departure of Dwight Howard, the Orlando Magic faced plenty of questions, not least of which was through whom they'd run their offense. For seven years, the Magic based damn near everything they did at that end of the floor on Howard. If he wasn't posting up and commanding double-teams, he was setting screens and rolling to the cup, or snaring offensive rebounds for putbacks and drawn fouls.

Glen Davis, who stepped up in the playoffs against the Indiana Pacers as Howard recovered from a back injury, was an easy answer. But no one could have predicted the extent to which the Magic would lean on Davis in the first full season without Howard. The LSU product is using 21.2 shooting possessions--that's field goal attempts plus an adjustment for foul shots--per game and, through Wednesday's games, has the NBA's second-highest usage rate. 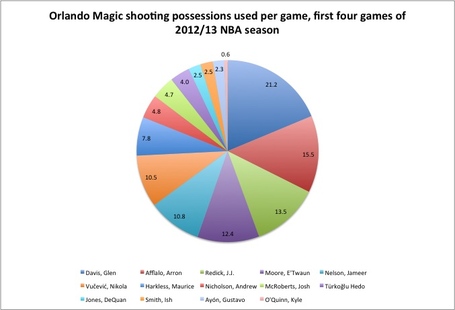 But Davis isn't always using those possessions effectively, as his dreadful 42 percent True Shooting mark attests. Davis is shooting only 40.3 percent on two-point shots, a simply dreadful figure for a player of his size and position.

Given his reputation as a trigger-happy jump shooter, it'd be easy to conclude that Davis is settling for far too many long twos. That's not exactly the case: he's taken 37 long twos through four games, and while that's a terribly high figure, it's not as though he's settling: he's taken another 28 shots in the restricted area and 12 more in the paint, but outside the charge circle.

The problem is that opposing teams haven't had any trouble stonewalling him at the rim. Davis has made 14 shots in the charge circle... and has had 13 of his shots blocked.

The takeaway would seem obvious: Davis just can't shoot quite so much if Orlando is to remain competitive. As nice as it is to see him challenging opposing defenses by taking the ball to the rim, his failure to convert there, or to even draw many fouls--he's earned just 15 foul shots so far--is a total drag on his team.

Making that conclusion even more obvious is that he's playing alongside three exceptionally efficient perimeter players much of the time: in Arron Afflalo, E'Twaun Moore, and J.J. Redick, Orlando boasts three wings with True Shooting marks over 55 percent. And yet Davis continues to fire away. Not to be obvious, but every shot Davis takes is one that Afflalo, Moore, Redick, and the rest of his teammates doesn't.

Davis reeled himself in a bit against the Minnesota Timberwolves on Wednesday, limiting himself to nine shot attempts in 19 minutes. Yes, that's nearly once every other minute, but Moore (14), Redick (12), and Afflalo (11) each got more looks.

Readers will rightly point out that Minnesota handed the Magic's hats to them, leading by as many as 27 points before winning by 15. Yet calling attention to Orlando's 0-1 record when Davis doesn't take at least 20 shots misses the point entirely: letting a woefully inefficient player waste possession after possession with missed jumpers and rejected layups is not a recipe for offensive success.