Orlando Pinstriped Post walks its readers through SB Nation's StoryStream technology, which feature is new to OPP in the SB Nation United launch.

The launch of SB Nation United brought SB Nation's StoryStream technology, previously only seen on the network's regional sites, to all of its team-specific blogs. With the Orlando Magic's season soon to start, StoryStreams will become fixtures at Orlando Pinstriped Post, so I wanted to take this opportunity to introduce StoryStreams to you, the OPP reader.

The idea behind the StoryStream is simple: it's a place to keep track of all updates on one particular event or news story. For example, when rumors began circulating Friday that Magic center Gustavo Ayón was set to leave Orlando to play in Spain, we set up a StoryStream for it. The first post has information about the initial report that Ayón was headed overseas, and a second post presented another report debunking the rumor. If, hypothetically, Ayón were to comment on the situation himself, we'd post an update in that StoryStream as well.

As another example, OPP has a StoryStream for Orlando's preseason game against the New Orleans Hornets on Sunday. The first post has the announcement of the game, the second notes that Ayón is set to start, and the third says Magic guard Arron Afflalo may sit out due to injury. In that same StoryStream, we'll post a GameThread for users to comment on the exhibition as it happens. When the game is over, we'll post a recap there as well. Were a player to suffer an injury during the game, we'd post an update on that story there too.

StoryStreams make sense because they enable readers to keep track of all developments regarding one story in one place. Elsewhere on the internet, news stories get posted, and then updated as developments emerge, and it is sometimes difficult to discern which information came out when. StoryStreams present all the relevant information on a story in reverse-chronological order. Further, authors have the power to designate certain individual updates as "important." Clicking the "important" tab in the left side of a StoryStream--please click here for an annotated screenshot--highlights only the most important updates, enabling readers to find, with ease, the most important content about the story they're tracking.

Further, liking a StoryStream on Facebook will automatically post all updates from that StoryStream to a given user's news feed, offering another way to keep up with breaking news.

Readers can view all updates in a StoryStream at one time or choose instead to view the updates individually. When using the latter option, readers can still navigate back and forth between individual StoryStream updates with ease, as demonstrated in the screenshot below. 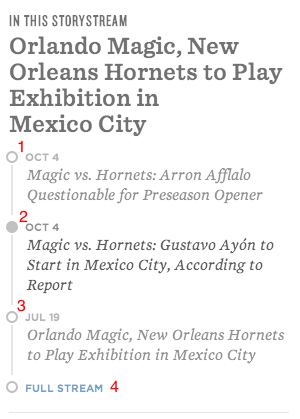 From the homepage, discerning which items are StoryStreams and which are not is easy, as the annotated screenshot below demonstrates: 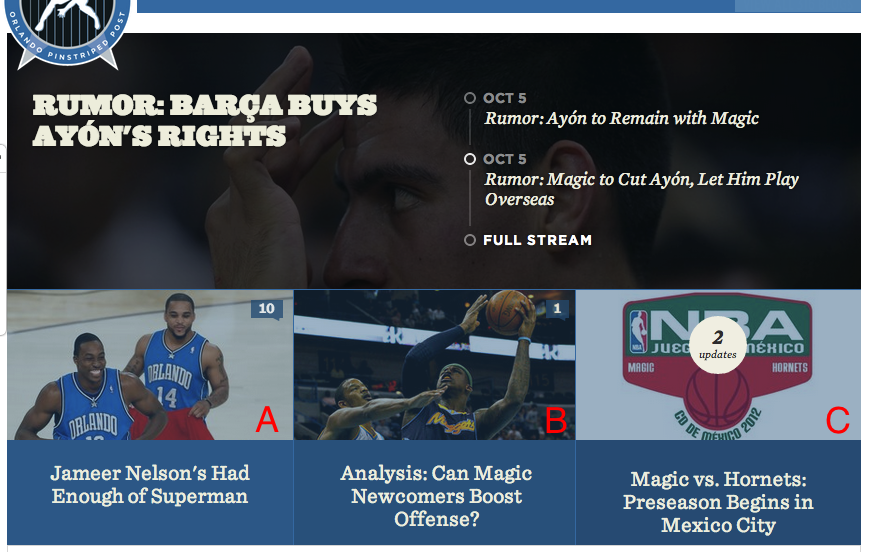 Given my experience with StoryStreams from my time working on SB Nation's regional sites, I have a fairly decent handle on how I wish to deploy them here at OPP: for game coverage and breaking news. I have noticed that other sites approach them differently. For example, Brew Hoop, SB Nation's Milwaukee Bucks blog, has started a StoryStream dedicated to feature posts analyzing Luc Mbah a Moute's defense against the NBA's most lethal scorers.

I'm quite interested to hear your feedback on StoryStreams, and answering the following questions would be of immense help to me as I plan this site's Magic coverage for the season ahead:

I thank you for bearing with the site as we adjust to SB Nation United. I want to stress that adjusting to United is a process we're all going through together; it's not just you, the reader, but also site writers, managers, and SB Nation's tech team. We value your feedback and constructive criticism.