After snooping through Andrew Nicholson's Twitter account a couple of months ago, I couldn't help but notice the Orlando Magic rookie plays one of my favorite pastimes on the iPhone: Words with Friends.

I'll be honest, I don't know how Words with Friends blew up in popularity over the years, considering it's nearly identical to Scrabble.

I believe the dictionary varies between Scrabble and Words with Friends. Or maybe Zynga got dibs to build the smartphone app first, before Scrabble even had the chance to. Wait, does it even matter?

Back to the story, I saw Nicholson had posted screenshots of the game a couple of months ago, in which he appeared to be slaughtering his opponents.

My first thought was, "Here's a guy entering the NBA with a degree in physics from St. Bonaventure University. A rarity. Not to mention, he plays Words with Friends? He has to be a word-nerd like me. I mean, not that there is anything wrong with that, but I think I could put him in his place."

When I first started playing Words with Friends, I lost a handful of games - yes, I know exactly what's running through your mind:

"How the hell is it possible for a writer to not be able to win games in Words with Friends? Aren't writers supposed to be articulate with their words?"

I'm not shy to admit my losing streaks. It probably took at least 15-20 games for me to understand the different offensive and defensive strategies. You could say it's like practicing for standardized tests, such as the Scholastic Aptitude Test or the American College Test.

Where's Allen Iverson when you need him?

So, I dared Nicholson to play Words with Friends with me over the summer. Initially, he had a lead until I somehow went on a deep run to prevent him from winning. 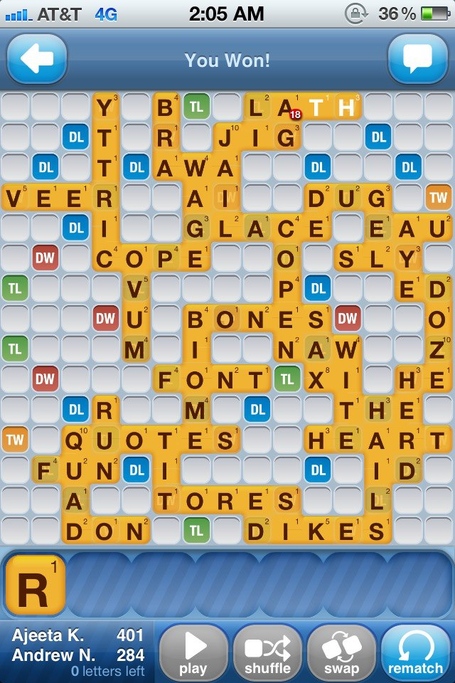 "I have like 20 to 30 games going on at once, so I'm trying just trying to keep up." Nicholson said during the Orlando Magic media day.

When asked if Nicholson was good at the Zynga app, he said:

All right, there is no way I can compete against a guy who is exactly a foot taller than me. I wasn't gifted with such physical prowess. I can't post-up anyone for what it's worth. Nicholson can beat me in that aspect, but I don't think he can outwit my savviness in Words with Friends.

In fact, there is a 2nd rematch happening as I type this. Nicholson just pulled out a 33-point word from his arsenal. 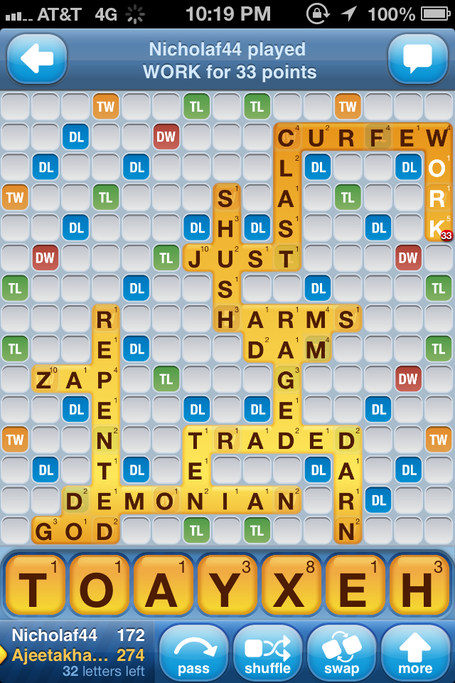 Though for now the record stands clear:

Reporter's note: Orlando Sentinel sports columnist Brian Schmitz reported a while ago about former Magic's player development director Adonal Foyle frequently schooling players such as Vince Carter, J.J. Redick, or even Mickael Pietrus in Words with Friends. Foyle had the nerve to embarrass Ryan Anderson, who originally taught him how to play the game. Then again, Foyle has always been a man with a voracious appetite for books. He's the guy who would place an education on a pedestal before daring to gun a 3-pointer.