Share All sharing options for: NBA All-Star 2012: Will an Orlando Magic Player Enter the Three-Point Shootout?

Given that the Orlando Magic lead the NBA in three-pointers made and attempted since the 2007/08 season, it's a surprise that only one player has represented them during an NBA All-Star Three-Point Shootout during that span: Rashard Lewis placed second to Daequan Cook at the 2009 event in Phoenix. With Orlando hosting the 2012 NBA All-Star Game and shooting brilliantly from three-point range to start the lockout-shortened season, it seems likely that the NBA will invite a Magic player to join defending champion James Jones and four other entrants in the 2012 Three-Point Shootout.

Which Magic players have the best chances of earning an invitation? Ryan Anderson, Hedo Turkoglu, and J.J. Redick lead the team in made triples, in that order, so they'd seem to be the most likely candidates. Though the league does not publicize the methods by which it selects three-point shootout competitors, one can examine the data to find the characteristics of prior entrants, and then see how this year's Magic squad measures up to them.

Orlando Pinstriped Post did just that, finding the typical invitee to the last three Three-Point Shootouts averaged 2.2 made three-pointers per game through the end of January, with a 41.5 percent conversion rate; note that these averages ignore the figures of reigning champions, whom the league automatically invites to defend their titles. Cook returned in 2009/10 despite shooting 30.8 percent, for example.

To see how Anderson, Redick, and Turkoglu stack up to the field from the last three seasons, make the jump. 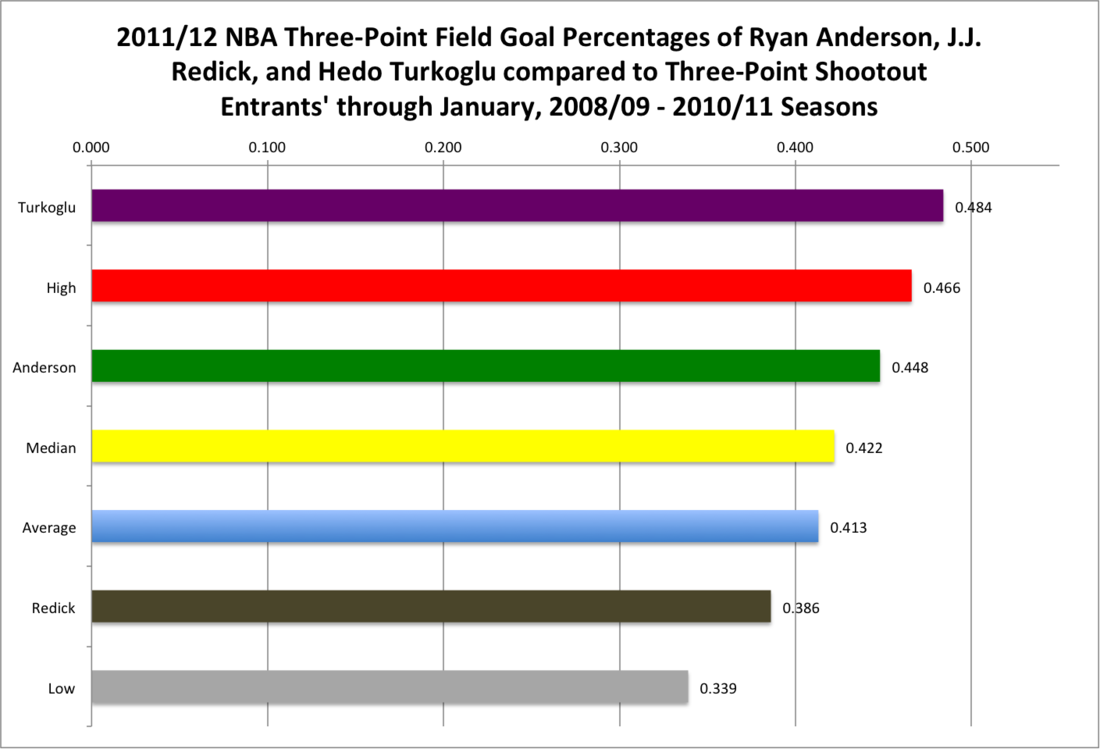 A look at three-point percentage shows Turkoglu, at 48.4 percent through Monday, would have the highest January conversion rate of any competitor from the last three seasons, topping Paul Pierce's mark of 46.6 percent in 2009/10. Anderson, at 44.8 percent, also tops the median and average percentages. Redick's 38.6 percent three-point shooting is solid for NBA standards, but not for Three-Point Shootout standards; among Three-Point Shootout competitors over the last three seasons, only Danny Granger (36.3 percent), Danilo Gallinari (35.7 percent), and Kevin Durant (33.9 percent) have been worse through January than Redick. 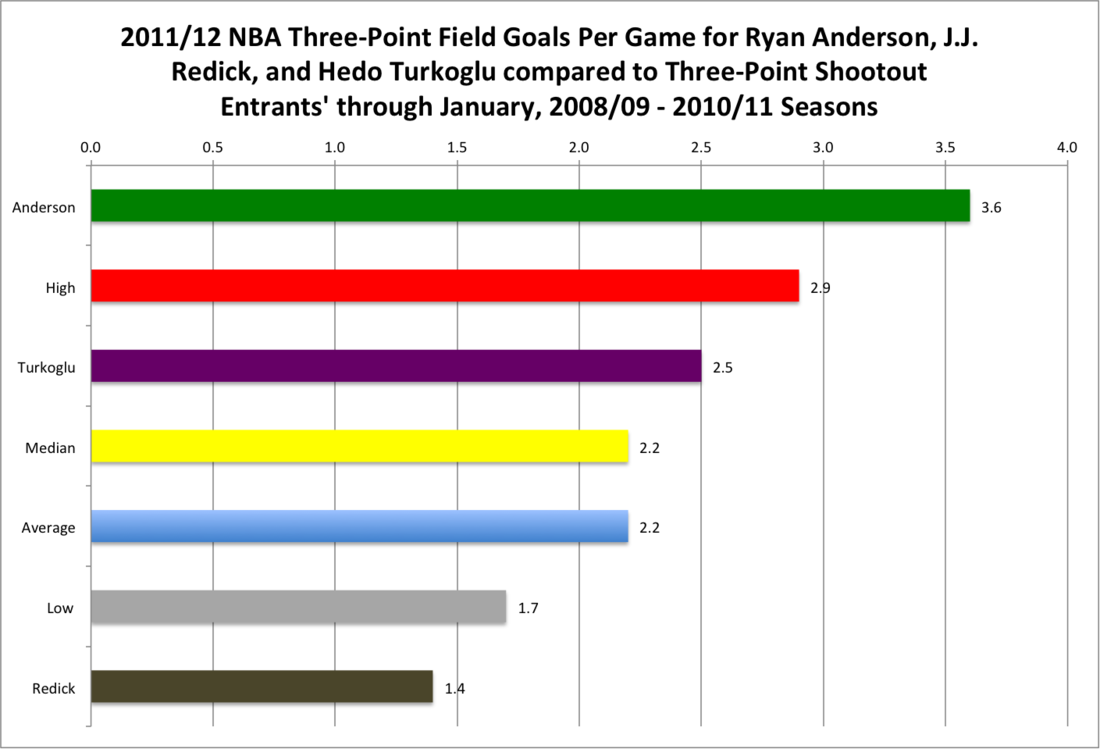 When it comes to three-point shooting, volume is every bit as important as accuracy; if it weren't, we might be discussing Chris Duhon's chances of representing the Magic in the Three-Point Shootout; he's hitting 57.1 percent of his triple-tries, but making just 0.7 per game.

In this category, Anderson shines, as his 3.6 mark would set a new high among competitors since the 2009 Shootout. Turkoglu's closer to the previous high--which Lewis set in 2009--than he is to the pack, while Redick lags sorely behind.

Based on recent history, then, we can conclude that Anderson and Turkoglu stand the best chances of receiving an invitation to challenge Jones on the Amway Center parquet this February 25th. Both players exceed the recent standards for accuracy and volume. One suspects the league would choose Turkoglu over Anderson if pressed, given Turkoglu's name recognition and large fanbase in Turkey.

Cruelly, Redick, the Magic player whose stroke is best suited for such a shooting contest, wouldn't seem to stand much of a chance of earning an invitation, as he's neither accurate enough nor prolific enough to distinguish himself from the pack.

In prior seasons, the NBA announced the Three-Point Shootout field in early February. Orlando's players still have plenty of games left to change their odds.