The Orlando Magic acquired high-scoring shooting guard Jason Richardson in December, hoping he'd be an upgrade over Vince Carter, the incumbent starter at the position. Though Richardson doesn't have Carter's all-around offensive skill set, Orlando nonetheless banked on Richardson filling it up more often, and more efficiently, than Carter. But after a torrid start to his career in Magic pinstripes, Richardson has cooled off considerably.

The most obvious factor in his decline is his baffling inaccuracy from long range: he's connecting on just 35.8 percent of his 5.8 threes per game with Orlando. Were it not for his 41.9 percent mark with Phoenix, that'd be his worst showing from beyond the arc since 2004/05.

When the Magic brought Richardson in, they had to expect him to put up more than 13.4 per game; if they didn't they could have simply held on to Carter. So what's up with him, anyway? Why is he shooting just 39.9 percent in the 2011 calendar year? When, if ever, can they expect him to return to the form he exhibited in Phoenix?

Unfortunately, these questions don't have easy answers, based on the data. With a tip of the cap to HoopData.com, here's how Richardson's field goal percentage splits by floor zone look like, pitting his Phoenix percentages against his Orlando ones: 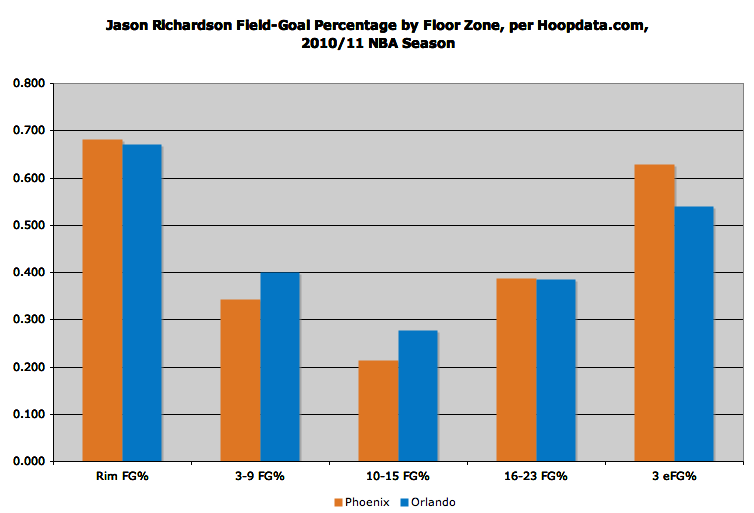 Were his percentages on long jumpers down across the board, we might simply say Richardson is mired in a shooting slump, out of which he ought to break out soon. But his accuracy on long, two-point jumpers in Orlando is nearly identical to what it was in Phoenix, yet his effectiveness on threes has diminished considerably. His percentages elsewhere are roughly in line with what he put up as a Sun, so we have to wonder about the sorts of three-pointers he's getting.

Let's now look at Richardson's shooting tendencies in Orlando as compared to Phoenix. From where is he getting his shots now that he's switched teams? 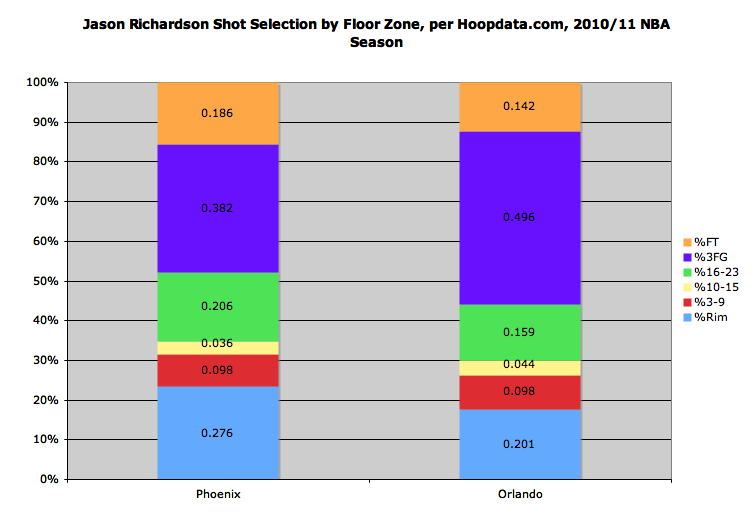 As we might have suspected, based on the nature of the Magic's offense, Richardson is trying more threes than in Phoenix at the expense of driving to the basket and drawing fouls. Because he's taking more threes at a much lower percentage, his overall field-goal percentage has dropped despite solid across-the-board conversion from other areas on the court.

What's more surprising is, according to Synergy Sports Technology, Richardson still gets to run a fair amount. With the Suns, 20.8 percent of his offense came in transition; in Orlando, that figure has increased the slightest of amounts, to 21 percent. His stark drop-off in effectiveness has come in the halfcourt. And because Orlando's is a halfcourt-based offense--89.5 percent of its plays overall come in the halfcourt, the third-highest rate in the league--Richardson's weaknesses there have been magnified.

The biggest difference in Richardson's effectiveness as a halfcourt player in Phoenix, in opposition to Orlando, is his ability to make open jumpers off the catch. With the Suns, he shot 27-of-60 (45 percent_ in such situations, with many of those attempts coming from beyond the arc. In Orlando, he's just 23-of-71 (32.4 percent). His percentage on jumpers in which he's not wide open is roughly the same: 37.9 percent in Phoenix versus 38.9 percent in Orlando.

We might attribute this difference to his getting feeds from Steve Nash, the Suns' future Hall-of-Fame point guard, in Phoenix as opposed to Jameer Nelson in Orlando. That seems fair enough. But, even, accounting for that difference--if such an explanation is even valid--ought Richardson be shooting better? After all, this is a player who averaged 21.4 points per game during his 96-game stint as a Charlotte Bobcat, playing alongside mediocre-at-best point guards Raymond Felton, Jeff McInnis, and D.J. Augustin.

Ultimately, we'll judge Richardson on what he accomplishes in the playoffs; I'm sure Magic fans would be totally okay with his shooting 38 percent the rest of the regular season if it meant he'd get hot come mid-April. A potential solution, to offset his subpar three-point marksmanship, would be for him to drive to the basket more. But he can't afford to stop shooting threes, either; he's too gifted there, historically, to abandon that facet of his game. Until he gets on the right track, Orlando will continue implementing a by-committee approach to its second offensive option behind Dwight Howard.