Orlando Magic Must Rely on Dwight Howard in Fourth Quarters

Share All sharing options for: Orlando Magic Must Rely on Dwight Howard in Fourth Quarters

The Orlando Magic's loss to the New Orleans Hornets on Friday night called more attention to a problem that's plagued the team for a while: the team's inability to get All-Star center Dwight Howard involved in the offense late in close games. Against New Orleans, Howard got one shot attempt in the final quarter, which he made, despite being matched up against non-threatening defenders in Jason Smith and Aaron Gray. Coach Stan Van Gundy took the blame for not telling his players to deliver to Howard. "I just got afraid to go to it and figured anytime they got a good look they would foul him," he said, "but that’s just not a good enough reason."

And the data show Van Gundy is correct. Orlando hasn't beaten a winning team since January 8th, a span of eight games, and even the Dallas victory should come with an asterisk, as the Dallas Mavericks squad it defeated that night didn't have franchise power forward Dirk Nowitzki in the lineup.

Clearly, this approach isn't working, despite a rally against the East-leading Miami Heat in which Howard went scoreless on no shot- or free-throw-attempts and Orlando scored 37 points anyway. As the graphs below the fold will illustrate, Howard's efficiency is too fantastic to ignore. And for all the concern about his poor foul shooting, he's been more accurate at the line than his teammates in fourth quarters during this streak.

Here are the split stats for Howard and his teammates during this skid. First, scoring efficiency, as measured by True Shooting Percentage: 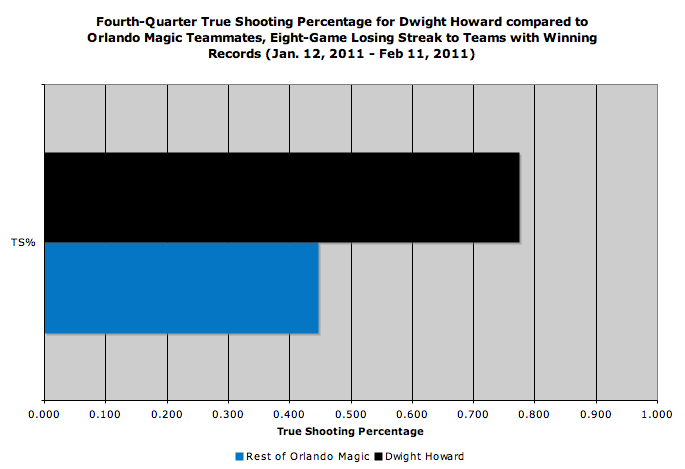 Consider the gulf in efficiency as you gander at the next graph, which shows the disparity between Howard's involvement and that of his teammates over the same span of fourth quarters: 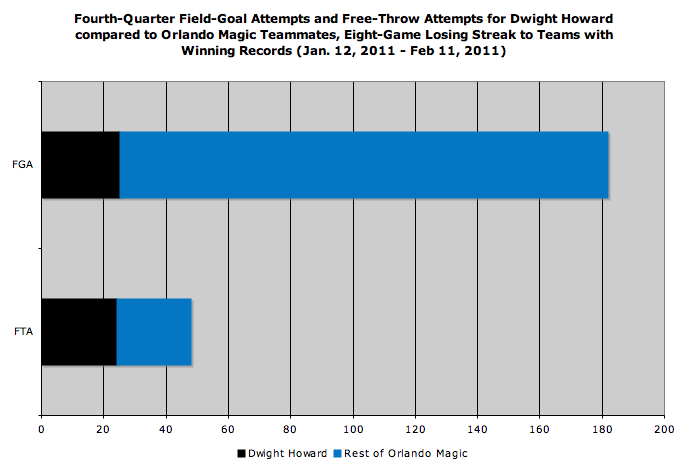 Broadly speaking, giving any player more shot attempts leads to a decrease in his efficiency; for many players, high shooting percentages are simply a function of their limited, and very specific, role in an offense.

But Dwight Howard is not most players. This season, his True Shooting mark of 60.3 percent is exactly in line with his career average despite taking on more offensive responsibilities than ever; when on the court, he's ended 27.4 percent of Orlando's possessions, well above his career average of 23.1 percent. The irony of this Magic season so far is Howard's more involved than ever... except for when his team really ought to involve him, in which case it treats him like he's an offensive liability.

Van Gundy's comments after the Hornets loss seem to indicate he'll be more inclined to force his team to feed Howard in the future. If losing this early-February game to a good team proves to be a teaching moment that leads to more fourth-quarter touches for the team's best player, leading scorer, and franchise cornerstone, down the line, then it'll have been a net positive.

But if not, I'm not sure what it'll take for the team to give Howard the ball. Howard's a back-to-basket center. He's not a perimeter player who can simply bring the ball up himself and immediately look for his own shot. Howard, as with most big men in general, relies on his teammates to get him the ball. He needs to demand it, his teammates need to get it to him, and Van Gundy needs to make sure the team's clear on that point. There ought not be any ambiguity here.