In explaining his decision to make two major trades--acquiring Gilbert Arenas, Earl Clark, Jason Richardson, and Hedo Turkoglu--nearly three weeks ago, Otis Smith, the Orlando Magic's President of Basketball Operations, said, "I thought we needed scoring. We needed a little bit more punch. All of those guys have the ability to come in and move the ball and score the ball." After dropping their first two games as a new team, the Magic have won seven straight, thanks in large part to the offensive firepower Smith said he wanted to add. What's worthy of our attention here, though, is that none of the newcomers has asserted himself offensively; rather, Orlando now has a committee of viable scoring options behind Dwight Howard, its primary threat.

Coach Stan Van Gundy is pleased with this development. Following his team's most recent victory, a 97-87 contest over the Milwaukee Bucks, Van Gundy said, "the nine games we've had with this group, our shot distribution is good, and we have good balance." Analysis of Van Gundy's assertion demonstrates he's right on the money here.

First, let's take a look at how the Magic have divvied up their shooting possessions--which accounts for field goals and free throws--in the nine games since Arenas, Clark, Richardson, and Turkoglu joined the team. Each of the eight players in Van Gundy's new rotation gets his own slice in this pie chart, while I've combined the shooting-possession usage of the four situational reserves--that's Malik Allen, Clark, Chris Duhon, and Quentin Richardson--into one piece. 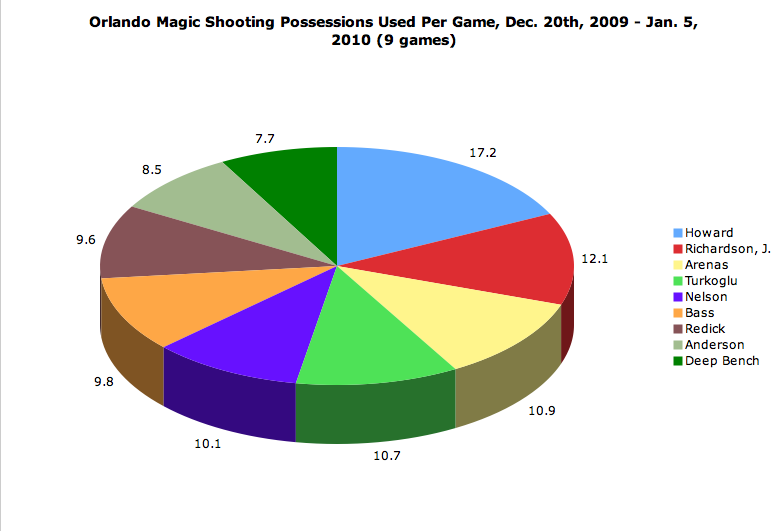 Impressively, the Magic have six players using between 8.5 and 10.9 shooting possessions per game. Howard's quite unambiguously the focal point at 17.2, and Jason Richardson is getting a solid number of chances at 12.1, but overall, that's solid balance. Effectively, opposing defenses can't be sure whom to ignore on offense, as every player in Van Gundy's rotation is a proven scoring threat. Van Gundy pointed that out after the Bucks game, saying, "the eight guys we play are scorers." Plus, after Howard and Jason Richardson, everyone's getting very similar opportunities to score. How can defenses account for such a varied offense? I'm not entirely sure.

Think of it this way: Howard's the first option, and Jason Richardson's developed into the number-two. After that? Ryan Anderson, Gilbert Arenas, Brandon Bass, Jameer Nelson, J.J. Redick, and Hedo Turkoglu are effectively options 3A through 3F, in no particular order.

Though valuable, shot distribution is but one way to evaluate an offense. Here, I've arranged the Magic by possession usage on the X-axis and efficiency, as measured by True Shooting Percentage, on the Y-axis. This chart should give us a better idea as to how appropriately Orlando is allocating its shots. At the risk of being obvious, I'll mention that, in an ideal arrangement, the most efficient players will have the most opportunities. 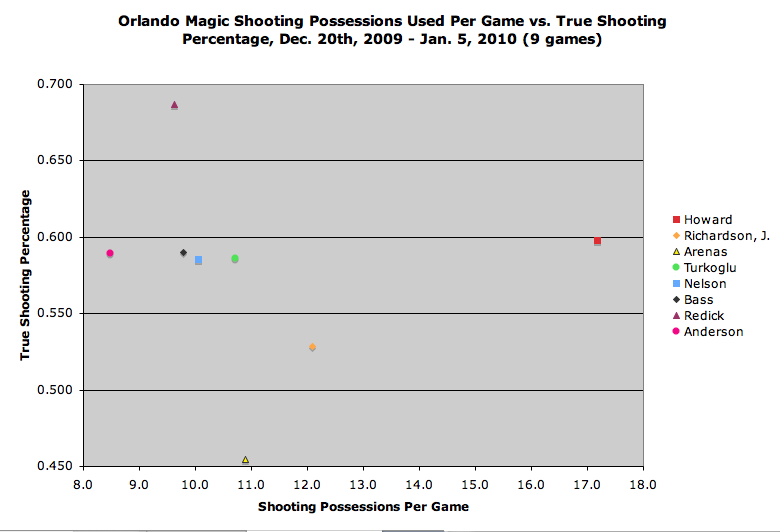 Howard, Orlando's biggest possession-eater, boasts a True Shooting mark of 59.8 percent since the trades. That's excellent by any standard, but especially relative to his high usage. Here, there are no complaints.

Jason Richardson and Arenas rank second and third since the trades in shooting possessions used, so if nothing else, they aren't shy. Richardson's True Shooting mark of 52.8 percent is just shy of the NBA's 53.9 percent average, which is encouraging, as the three-point marksman has yet to find his outside shooting stroke in Orlando, connecting on 33.3 percent of his treys in Magic pinstripes. Once he gets it going again, he'll find himself far north of the league average. Provided his usage continues apace, he could find himself settling nicely into the second-leading-scorer role at around 17 points per game.

Arenas is the biggest concern here. Nothing in his track record the last three seasons suggests he'll score efficiently enough to merit the touches he's getting, a subject I covered in greater detail last week. Two stats from his brief Magic tenure support that, too: in 209 minutes, he's managed just 9 free-throw attempts, and only 4 since his Orlando debut. Second, he's shooting 19-of-52 (36.5 percent) inside the three-point arc. He should be shooting off the catch or not at all, at this point, at least until he regains his explosiveness.

But turn your attention, if you will, to the left portion of the chart, where we see the big benefit of the balance I alluded to earlier. Ryan Anderson, Brandon Bass, Jameer Nelson, and Hedo Turkoglu have True Shooting Percentages between 58.6 percent and 59 percent, and get similar chances, which presents a real challenge for opposing defenses when deciding on whom to focus.

J.J. Redick, as we can see, is on another planet, in terms of True Shooting. 68.7 percent for the fifth-year shooting guard, and while it's not sustainable, his bombing from all over the court has helped offset the below-average turns Jason Richardson and Arenas have submitted.

Compounding problems for opposing defenses? Orlando's scorers aren't one-dimensional players. Arenas, Nelson, Redick, and Turkoglu all excel as playmakers; their passing keeps defenses guessing even more. The other players aren't quite as gifted in this respect, but none is particularly selfish either. Fortifying the roster with Arenas and Turkoglu has led to a dramatic increase in assisted baskets, as I wrote earlier this week.

It's fair to say Smith's trades have paid off in the short term, resulting in victories as well as improvements in areas he cited as specific needs. But the bigger goal for this team is to win a championship, so quite obviously it's too early to tell if Smith's gambit will work in that respect. But after a discouraging, dispirited start to the season, Orlando's back on track and charging hard in the Eastern Conference. The offense has played no small part in that rapid improvement.