Will the NBA Invite J.J. Redick to the Three-Point Shootout?

Share All sharing options for: Will the NBA Invite J.J. Redick to the Three-Point Shootout?

Orlando Magic guard J.J. Redick recently told Tim Povtak of NBA Fan House he'd "love to" compete in the forthcoming Three-Point Shootout at this year's All-Star Weekend event in Los Angeles. And he's sure he'd give his opponents a good scare, telling Povtak, "I've never lost a three-point competition." But will he even receive an invitation? That much is up for debate.

At 44.8 percent on the season, Redick leads the Magic in three-point shooting, which should at least bring him into the conversation about potential invitees. But investigating the credentials of players to whom the league has extended invitations in recent years reveals two related, glaring flaws on Redick's resume: he doesn't play many minutes and, consequently, doesn't bag many triples per game.

But in terms of percentage, he's golden. The average three-point percentage through January for Shootout competitors over the last three seasons stands at 42.2, with the median at 42.8. Redick tops both, at 44.8 percent, fairly easily: 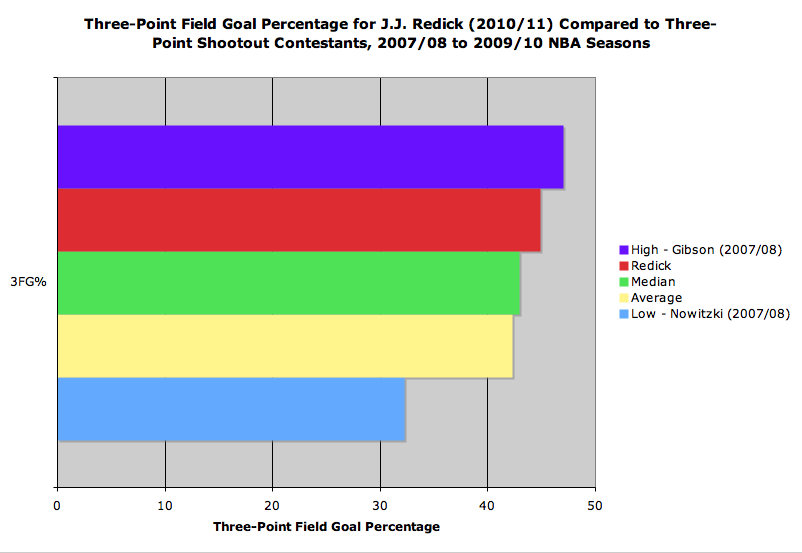 But as we'll see below the fold, in the other two categories, he simply doesn't quite measure up, casting doubt over the possibility of his appearing in this year's shootout.

First, a look at playing time. Daequan Cook, who won the Shootout in 2009, averaged 25.9 minutes per game through January before making his appearance. Redick stands at 24.9, so from this perspective, he faces long odds. Even in the eight games since the Magic reshuffled their roster with two major trades, he's only seen his minutes increase to 26.6. The average is 33.7 minutes and the median is 34.3. 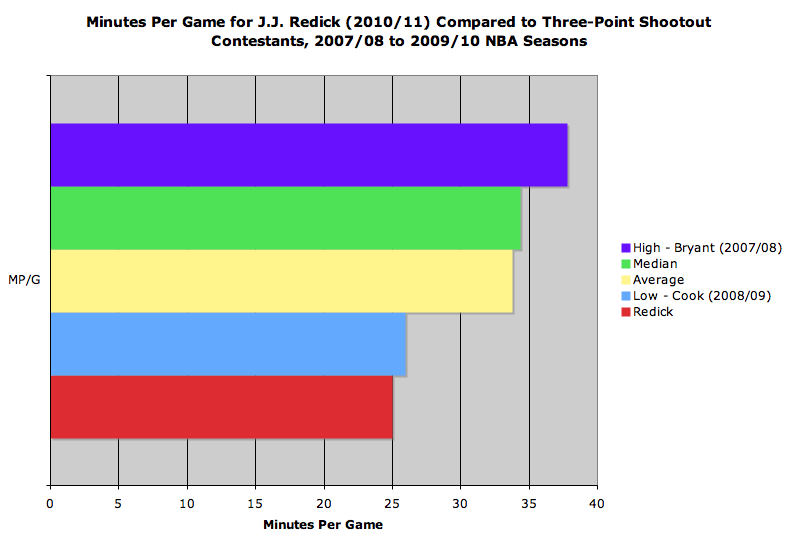 In connection with his relatively low minutes averages, we see he doesn't make many threes per game, at 1.6. 11 of the 16 players invited over the last three seasons averaged at least 2 made triples per game through January, led by Rashard Lewis' 2.9 in 2008/09. Only in 2007/08 did any competitor enter the competition with fewer made threes on a per-game basis than Redick: Richard Hamilton (1) and Dirk Nowitzki (0.8), who replaced the injured Kobe Bryant at the last minute. 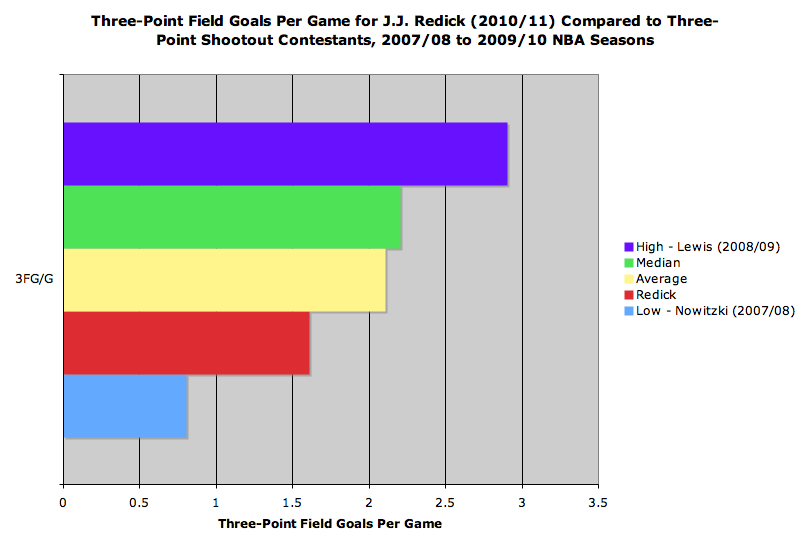 Working in Redick's favor this year, though? A dwindling field. The average competitor in the last three Shootouts made 2.1 three-pointers per game at 42.2 percent. According to basketball-reference's indispensable Play Index, Ray Allen, Kevin Martin, and Mike Bibby are the only three players this year making at least 2 threes on 42 percent shooting, meaning the NBA may find itself having to consider more "fringe" candidates along Redick's lines. Loosening the criteria to include players averaging 1.5 triples per game, on the same percentage, adds 10 more candidates, including Redick, to the mix. The league will select five players to challenge defending champion Paul Pierce, an L.A. native, this season, and I expect at least three of them to meet those criteria.

All things considered, we ought to at least open ourselves to the possibility the NBA will indeed invite Redick to take part in this season's Shootout. But there's a pretty good chance higher-volume shooters like Daniel Gibson, James Jones, or even Magic teammate Hedo Turkoglu could edge him out.