For Orlando Magic to Succeed, Hedo Turkoglu Must Produce

Share All sharing options for: For Orlando Magic to Succeed, Hedo Turkoglu Must Produce

Hedo Turkoglu became the most talked-about player the Orlando Magic acquired from the Phoenix Suns on December 18th, based on his prior five-year tenure with Orlando which included a Most Improved Player award and three solid playoff runs. Orlando acquired Turkoglu and Earl Clark as throw-ins from the Suns for the privilege of netting starting shooting guard Jason Richardson (averaging 19.3 points in 31.8 minutes with the Suns) in the trade, and though Richardson's had a good go of it in Magic pinstripes, Turkoglu's arguably the most important player from the trade, at least in the short term.

Jeff Fogle of HoopData.com referred to Turkoglu as "The Straw That Stirs The Raki" for Orlando, which is difficult to disagree with based on the data Fogle presented. At the time, the Magic were 14-1 when Turkoglu made three or more field goals and 0-5 when he made two or fewer. I wanted to expand on Fogle's work, which is particularly important moving forward, as a sore back has limted Turkoglu in recent days. John Denton of OrlandoMagic.com has more:

This injury might bear keeping an eye on – Hedo Turkoglu gingerly walked out of the Magic locker room Sunday night complaining of lower back pain. The soreness has bothered Turkoglu for the past week and it’s clearly affecting his aggressiveness off pick-and-roll sets

So Turkoglu is hurting, he's played poorly lately, and the Magic went just 2-2 against a relatively lax schedule last week. With a nod toward Fogle, let's take a look at how connected Orlando's success is to Turkoglu.

Knowing Turkoglu's points contributed and possessions used for each game he's played for Orlando, I calculated his points-per-possession in each game. I then plotted that figure against the Magic's team points-per-possession in every game. The black line represents Turkoglu and the blue one stands for Orlando. A black "X" on the Magic line denotes a loss, while a black circle indicates an Orlando victory: 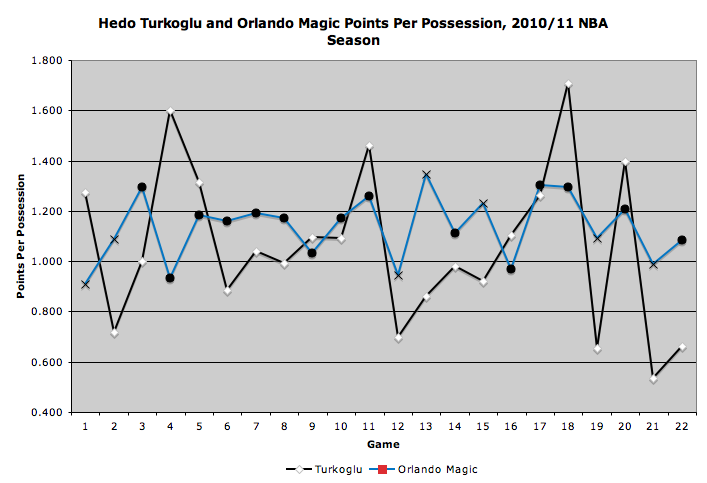 A glance at the Magic's four most recent games--their tepid 2-2 stretch last week, in other words--shows Turkogu had his three worst performances of the season there, which shows his back injury really must be bothering him. This is pretty clearly, a problem. Fogle wasn't messing around when he pointed toward Turkoglu as a canary in the coal mine for Orlando: when Turkoglu produces at least one point per possession, the Magic's record stands at a robust 11-1, which includes wins against the Boston Celtics, San Antonio Spurs, and Dallas Mavericks. That's the good news.

When he's below 1 point per possession, though, Orlando's only 4-6, and has lost narrowly to the Celtics, New Orleans Hornets, and Oklahoma City Thunder, and by 7 points to the Detroit Pistons. I include the former three good teams there to support the idea that an "on" Turkoglu could have swung those games in Orlando's favor.

Another point to take away here is Turkoglu's relative inconsistency. That he's met or exceeded one point per possession used in only 12 of his 22 games since returning ought to be cause for concern. When he's on, Orlando's tough to beat; the Magic's lone loss with Turkoglu exceeding the one point per possession-threshold was to the Atlanta Hawks on December 20th, their first game with Turkoglu, Richardson, Clark, and Gilbert Arenas in uniform.

If you prefer a more traditional statistical profile of Turkoglu in Magic wins and losses, I've provided it here:

Perhaps this simpler table makes Turkoglu's importance more clear than the chart did. Turkoglu shoots dreadfully and scores infrequently in Magic losses compared to Magic wins. Of most interest to me is his raw field-goal shooting in losses: it's worse than his already awful three-point percentage in defeat, which gives me the impression that Turkoglu's two-point jumper is the best indicator of potential Magic success. Turkoglu is 9-of-42 (21.4 percent) on two-point baskets in Orlando's six losses with him in the lineup. He's more than three times as accurate inside the arc, at 65.1 percent, in victories.

This analysis looks solely at Turkoglu's offense; it doesn't account for his work on the glass or at the defensive end in the slightest, and as such is only a partial picture of what he means. But, to be frank, Orlando didn't agree to take on the three seasons remaining on Turkoglu's contract because it wanted his rebounding or defense. No, he's here to facilitate the offense and make the occasional--but not infrequent--jumper.