Share All sharing options for: For the Orlando Magic, Shifting Rashard Lewis to Starting Small Forward Has Big Implications

Josh Robbins reported yesterday that Orlando Magic head coach Stan Van Gundy will weigh the merits of starting Rashard Lewis at small forward in the season ahead, which is a lot to chew on. Lewis has started all 280 of his regular- and post-season games at power forward since joining the Magic prior to the 2007/08 season. At last year's media day, Lewis told Eddy Rivera he considers himself primarily a power forward based on his Orlando experience. For the last three campaigns, the Magic's floor-stretching offense--aided by putting the knockdown-shooting Lewis, a small forward in his first nine professional seasons, on the perimeter--has helped them become among the league's top teams, though its work on the defensive end has been even better during that stretch. And while Van Gundy says Lewis will play both positions this year, the fact that the team could have a different look at tipoff each night signifies... something.

Sorry I can't be more helpful here. We won't know what exactly this hypothetical move means until the season starts, and Van Gundy points out that figuring out where to start Lewis "sort of makes everything else fall into play."

When I wrote about the potential for Lewis moving to small forward in early June, I only considered what it'd mean for the team's defense; I failed to account for what it'd mean for the playing rotation. Which is rather a lot, as it turns out, because it shifts four other players around. Either Mickael Pietrus or Quentin Richardson, the two contenders to start at small forward if Lewis sticks at power forward, would face a huge minutes crunch. Ryan Anderson and Brandon Bass would see upticks in playing time, as one would nab Lewis' former power forward slot and the other would become the backup, even if Lewis plays there a bit too.

The picture becomes even more muddled when one considers, as Robbins suggests, Vince Carter could shift to small forward at times in order to share the floor with J.J. Redick at shooting guard. In his roster breakdown, in-house beat writer John Denton says that Redick will "get more minutes than ever this season." Because Redick can only play shooting guard, and because he averaged a career-best 22 minutes per game last season, it's a safe bet that he'll play more than half a game on most nights this season.

Also, Denton says to "expect" backup center Marcin Gortat to also get a few chances to play power forward, as he "has also worked hard on his mid-range jump shot this summer."

So, in Carter, Lewis, Pietrus, and Richardson, the Magic have four players who could log heavy minutes at small forward on any given night. The same is true at power forward, where Anderson, Bass, Gortat, and Lewis can capably play.

And so far, some 400-odd-words into this post, we've only considered names on paper; we have not discussed the change in play style that comes with moving Lewis to the three when the ball tips, which further underscores what a tricky matter this is. I won't bore you, or test my own patience, by breaking down every forward combination possible with those seven names. But in broad terms, starting Bass alongside Lewis would give the Magic the conventional look that one-fourth of OPP poll respondents favor. Starting Anderson and Lewis maintains the Magic's spread style, but leaves the bench bereft of scoring outside of Redick and Bass. In theory, Anderson could be the first player subbed out under this arrangement, with either Pietrus or Richardson coming in at small forward, in turn shifting Lewis to power forward, and thus keeping the floor spread. But Lewis has to rest sometime, which means Bass or Gortat will get more minutes at the four anyway. Try to imagine that previous sentence as a flowchart.

I'll reserve further judgment on the issue until Van Gundy appears to end the experiment, which, as he told Robbins, may "could be an ongoing thing, say, through the first half of the season." Until then, be prepared for this issue to nag at you as Van Gundy tinkers and his players adjust.

Note: For reference, I've made this chart showing the distribution of power forward minutes last season; it's from the same data set I used to supplement this post about Bass' surprise return to the rotation in late March. You can't see the exact figure on the chart, so allow me to clarify: the Magic only played a "conventional" lineup--which, by my definition, means playing Bass or Gortat at power forward--15.98 percent of the time. You may find it helpful to click the image, which will enlarge it. 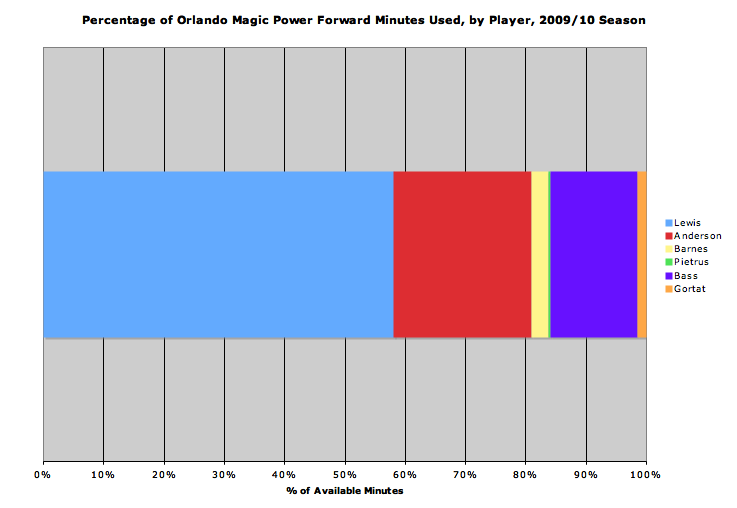