Volume, Not Percentage, the Key to Improving the Orlando Magic's Potency from the Foul Line

Share All sharing options for: Volume, Not Percentage, the Key to Improving the Orlando Magic's Potency from the Foul Line

Yesterday, Tim Povtak of NBA FanHouse filed this story about Ted St. Martin, the world record-holder for consecutive free throws made without a miss, in which St. Martin guarantees he can teach any of the NBA's worst foul shooters--including the Orlando Magic's Dwight Howard--how to convert at a 90 percent rate from the stripe. St. Martin wonders why he hasn't been given the opportunity to work with NBA teams on their shooting:

"Think of all the games in the NBA that have been lost by poor free-throw shooting. It's something that's easily fixable. It's not rocket science. It's simple stuff,'' he said. "I guess, the NBA just thinks I'm too old, too short, to teach it. It still puzzles me.''

He certainly seems qualified, given his body of work, which is why John Krolik is puzzled that no NBA team has given St. Martin a look.

In this excerpt, Povtak explains the potential impact better foul shooting might've had on the Magic's season:

If the Magic, for example, shot 90 percent from the free-throw line last season, they would have averaged 107.4 points instead of 102.8 points. It's safe to assume they would have won several more games.

But certainly it's unrealistic to expect any NBA team to shoot 90 percent from the line over the course of a given season; in the last 10 seasons, only 17 teams have topped 80 percent, with the 2002/03 Dallas Mavericks leading the way at 82.9 percent. Povtak certainly knows that, and I only believe he chose that 90 percent figure because it aligns with St. Martin's claims about the impact his teaching could have.

The real issue with regard to the Magic's foul shooting isn't the team-wide percentage, but rather how the shot attempts are distributed. Howard takes a ton of free throws at a horrid rate, accounting for 816 of the Magic's 2176 attempts last season all by himself, and shooting only 59.2 percent. Six of the Magic's other rotation players bested the league average of 75.9 percent, with a seventh, Jason Williams, only coming up three-tenths of a percent short.

Let's take a visual look at the impact Howard's had on the Magic's free-throw shooting since entering the league in 2004, and move along from there.

This first chart takes a year-by-year view pitting Howard against the Magic's cumulative team percentage, his team's percentage independent of his, and the cumulative league average; I consulted www.basketball-reference.com to find these data, and all others in this post, unless otherwise noted. 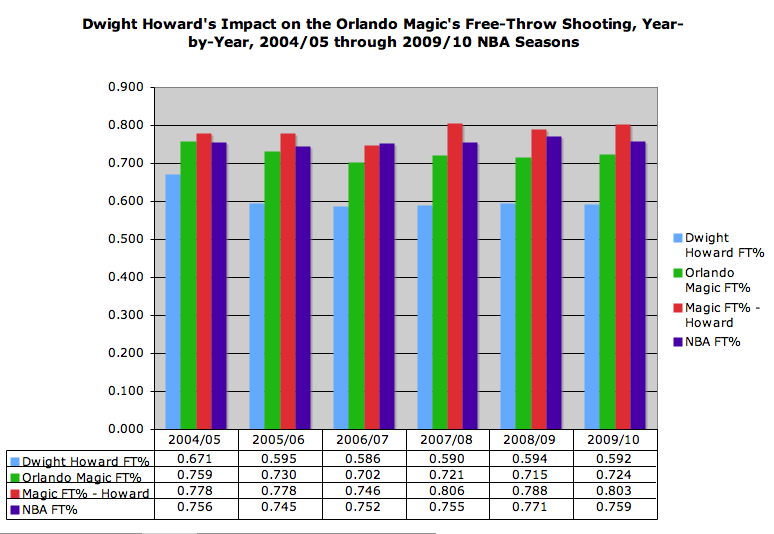 And here's a look at Howard's impact on the Magic's free-throw shooting overall. It's six seasons' worth of data. 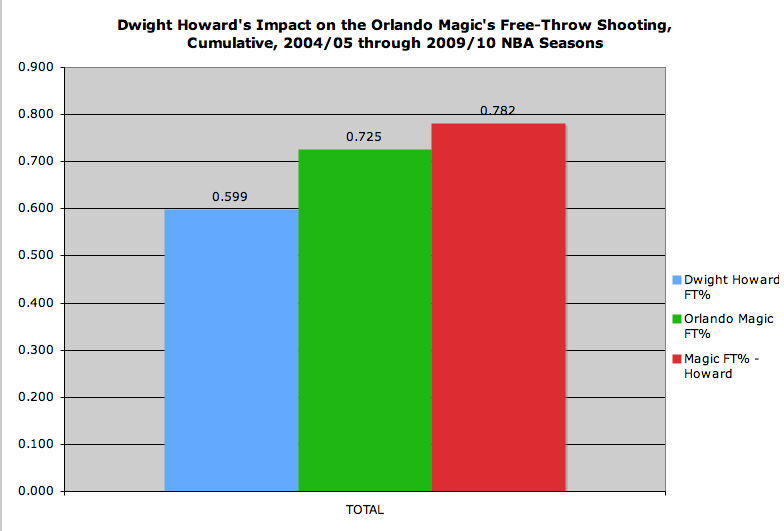 Clearly, it'd benefit Howard to improve from the foul line. But it'd also benefit him to, say, have a three-point shot, and the handle of a point guard. Unfortunately, he's about as likely to add those facets to his game as he is to ever be a 70 percent free-throw shooter. Six seasons and 4239 free-throws into his career, and he's a 59.9 percent shooter, and he hasn't topped 59.5 percent in the last four seasons. While he could certainly make some incremental improvements, by and large he is who he is from the foul line at this point; he's darn near his peak with regard to foul shooting.

The larger issue is that the Magic no longer have a high-volume, foul-drawing scorer from the perimeter to augment them at the stripe, though J.J. Redick made great strides in that area last season. To make that point, here's a list of Magic players, not counting Howard, to average five free throws per game since Howard entered the league. Five is admittedly a somewhat arbitrary number, but it seems appropriate in light of the fact that the average player takes just 2.4 per game, according to Hoopdata. More than doubling the average rate seems good enough for my purposes here:

Vince Carter ought to have been that guy last season, averaging precisely 5 attempts a game as a New Jersey Net in the season preceding his joining the Magic, but he faltered to 4.1 attempts per game, the second-worst figure of his 12-year career. Now, it's a team-wide effort to draw enough fouls to offset Howard's stroke, if indeed that's even a concern; the Magic were an elite offensive unit last season. But it'd be much easier if Orlando employed that one specialist instead of relying on the trio of guys to step up their foul-drawing games on any given night.

I know that the Magic's offense under coach Stan Van Gundy skews heavily toward pick-and-roll, draw-and-kick action, which results in plenty of three-pointers. But it seems to me that point guard Jameer Nelson and power forward Rashard Lewis could drive the ball to the basket a bit more often, seeking contact.

For all his speed and quickness, Nelson has never averaged more than 2.9 foul shots per game in his career, and in a five-game, 154-minute stretch last April, managed no trips to the line.

Lewis, meanwhile, averaged 5.5 and 5.3 free throw attempts per game in 2005/06 and 2006/07 as the Seattle SuperSonics' slashing complement to Ray Allen, though he also added 4.7 and 6.5 three-point attempts, respectively, in those years. He's older and decidedly more perimeter-oriented now, but I do think he has more driving in his game than he's shown, or has been asked to show, since joining the Magic.

St. Martin is unrealistic to expect an NBA team convert 90 percent of its free throws, but he's on the mark when he says that many games can come down to foul shots. The Orlando organization knows that much all too well. Nick Anderson's four late misses in the Magic's Game One loss to the Houston Rockets in the 1995 NBA Finals came to define his career and, in turn, led Chris Ballard to spotlighting him in the chapter about foul shooting in last year's The Art of a Beautiful Game. Howard and Turkoglu missed six of their 12 free throws in the fourth quarter in Game Four of the 2009 NBA Finals, which the L.A. Lakers won in overtime to take a commanding 3-1 series lead. And, this last season, Carter missed two free throws late in Game Two of the Eastern Conference Semifinals which would have brought the Magic to within a point of the Boston Celtics. Though we can fairly attribute Turkoglu's and Carter's misses to chance, their shortcomings really highlight Orlando's need for more reliability at the stripe.

But really, there's not an easy remedy. Howard seems unlikely to reach 65 percent overnight; Carter hasn't demonstrated that he still has the aggressive mentality or requisite athleticism to earn five-plus free throws per game; Redick hasn't played enough to reach that mark, and even then, he'll still have to add more drives to his game; and Nelson and Lewis simply aren't asked to draw contact too often.

The Magic, I believe, are still championship contenders, largely due to their work on the other side of the ball. And I do expect a bounce-back year from Carter. But certainly I'd feel better about their chances if they had a dynamic player who could earn several trips to the line each night.

UPDATE: Oddly enough, I never made the point I set out to when I started writing this post. Initially, I intended merely to say that the Magic's free-throw woes are overstated due to Howard's high-volume inaccuracy, and that he's typically on the floor with at least two other above-average foul shooters. Really, that's it. Should have taken 20 minutes. But instead I spent nearly two hours researching the other, more complex point around which the post ultimately centers.