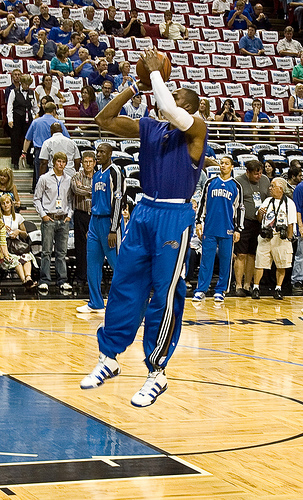 In the Orlando Sentinel Basketblog the other day, they had something about Dwight and what was told to him by Hakeem Olajuwon. Apparently Hakeem told Dwight based on what he saw Dwight do in the workouts was to stop being scared when he is in the game and use his entire arsenal. I am sure that most of you remember that YouTube clip of Dwight running back and forth on the practice court knocking down elbow/wing jumper after jumper. Perhaps this is one thing Hakeem was talking about. What I was wondering is, how do you all feel about Dwight possibly using his full arsenal? I think it might not necessarily be a great thing, the more I think about it.

Hear me out first before jumping to the comment section and ripping me for this, but if Dwight were to use everything he can do in the real games this coming season, it will most likely include these jumpers. If he can hit them consistently that would be a wonderful thing and add yet another wrinkle to the already difficult task of guarding Howard. Another benefit to him shooting more jumpers is when you shoot more jump shots, it creates muscle memory, and if Dwight knocks these jumpers down at a decent clip, his muscles will be able to re-create that good shot on a more regular basis, it would more than likely help improve his FT percentage.

If you don't quite understand how this would help, allow me to explain. The muscles will remember the natural shooting motion and will try to re-create that every time Dwight shoots, making his FT attempts more natural, thus allowing them to go in more often. Too many times that is the biggest problem with people who shoot a low FT percentage. Their FT motions are not the same as their shooting motion, which causes the muscles to change what they are doing ever-so-slightly and alters the shot. The best FT shooters in the game are usually the better shooters from long range, mainly because of their shooting motion.

Now back to Dwight. I know all of you are probably thinking, now why exactly is this a bad thing? It might not be. However, there is potential for this to hurt the Magic on offense more than you might initially suspect. Dwight has been in the top of the league in FG percentage for the last 3-4 seasons and this is because he almost never takes a shot outside of 5 feet. Even more so, his FG is so high because he has lead the league in dunks by an overwhelming margin in the last 2 seasons (didn't feel like looking up the stats, and I know he led the last 2 yrs).

My question is, would this decrease in dunks and increase in shots taken outside of 5 feet actually hurt him and thus the team offensively? If he shoots 50% or more from outside of 5 feet, that would be terrific statistically speaking, but it would be a downgrade from his 60+% from last year, thus decreasing his shooting percentage.  I do believe however that him shooting more will help his FT % which might end up balancing out the overall scoring output, but would it make him less EFFICIENT? I don't know the answer, and I hope that the answer is no. I hope that Dwight will get more shot attempts this coming season and he will use all the moves he has been working on and I hope that he shoots at a high percentage, I just don't know if all these things I am hoping will happen, actually will.

This FanPost was made by a member of the Orlando Pinstriped Post community, and is to be treated as the opinions and views of its author, not that of the blogger or blog community as a whole.