Can Rashard Lewis and Brandon Bass Co-Exist Like the Orlando Magic Brass Wants Them To?

Share All sharing options for: Can Rashard Lewis and Brandon Bass Co-Exist Like the Orlando Magic Brass Wants Them To?

Clearly, Bass isn't happy with how his first year with the Magic went, and he told NBA FanHouse's Tim Povtak last week that he wants Orlando to either play him more or to unload him. I documented his struggles in my year-end evaluation, so I refer you there for the full breakdown, but it suffices to say that his poor court awareness on both ends of the floor kept him affixed to coach Stan Van Gundy's bench for much of the year.

However, Bass has the support of team brass. Vander Weide believes playing him at power forward, with Lewis at small forward, will help the Magic. He explains:

"[....] I think you will see [Van Gundy] find against different matchups a way to play Brandon, move Rashard to the three, and do some interesting things there. We all learned. In our post-season conversation, Stan said he should have practiced Rashard more at the three because on the baseline he’s probably the best post-up three when he plays that position, although we love him at four the majority of the time. If you don’t practice it, you don’t play it."

And earlier this summer, team GM Otis Smith said he expect Bass to improve in his second Magic season, which one could interpret as an indication that he could play more, though that's merely my reading of the situation. The point is that Smith and Vander Weide have now expressed their confidence in Bass. Can he prove them right, with Rashard Lewis alongside him?

For one thing, Vander Weide isn't kidding when he says the Magic didn't play that group last year. Bass and Lewis shared just over 50 minutes of court time together last season, according to lineup data from basketballvalue.com. However, almost 32 minutes of that time came with Bass at center and Lewis at power forward, leaving roughly 18 minutes in the entire season when the Magic played Lewis at small forward and Bass at power forward simultaneously. Not to be too cheeky, but here's a visual version of that stat: 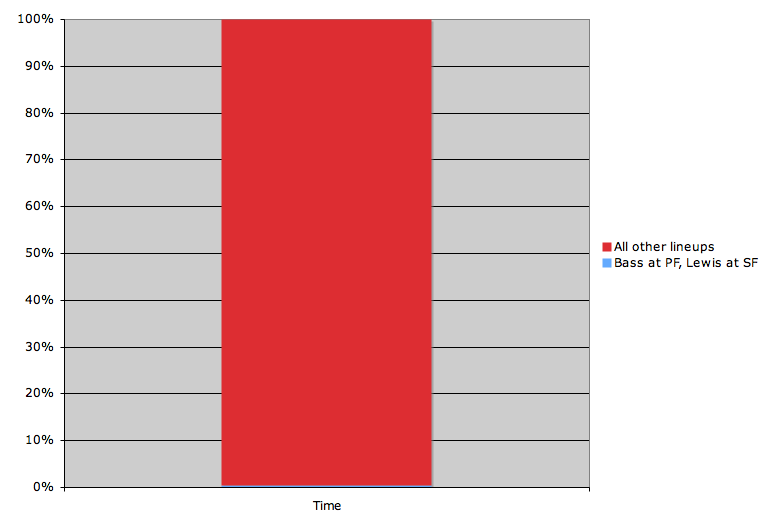 It's hard to draw any conclusions about how they'll play together from such a small sample size. My impression, based on their overall performance last season, is that Bass' best skill is scoring. 5.8 points in only 13.0 minutes per game last year, on a career-best 51.1% shooting. That's not bad for a guy still learning the playbook in the playoffs, I suppose. His asset is his mid-range jumper, typically the least efficient shot in basketball. Synergy Sports Technology shows, however, Bass connected on half of his 56 jumpers from within 17 feet of the basket last year, which ties him for 9th in the league among the 141 players who attempted at least 50 shots from that distance. Hyper-specific stat, I know, but again: that's Bass' biggest asset. Even when he posts up, he's more likely to turn, face, and shoot the jumper than he is to try a hook or drive for a layup. And in 92 post-ups last year, he passed the ball 8 times, so you know he's not likely to give the ball back once he gets it.

And Lewis? He can score too. Van Gundy's been known to run post-ups for him to get his offense going, particularly in third quarters if Lewis didn't get many touches in the first half of a given game. He's effective down there because, at 6'10", there aren't many small forwards who can handle his size. That's Lewis' utility as a combo forward: put him on the perimeter at power forward, and opposing fours can't keep up with him. Put him in the post, and opposing threes can't muscle him. For the first three years of his deal, the Magic have heavily leaned on the former strategy. Maybe it's time to try the latter a bit more. And that's why, to a degree, you like this news: the Magic aren't getting complacent. They are looking to make some changes. Not drastic ones--note Vander Weide saying "we love [Lewis] at the four the majority of the time"--but changes nonetheless.

Synergy shows that Lewis scored 0.974 points per possession on post-ups last year, in 117 possessions. If you count his passes, that's 146 post-ups in 72 games, or almost exactly two per game. In any case, he's almost always (90.6% of the time) stationed on the left block, and he's a tough cover because he doesn't tend to go one way or the other too often, turning over his left shoulder 46.3% of the time while turning over his right shoulder 41.1% of the time. There are possibilities here, you can see, given his gorgeous fadeaway over the right shoulder. Get some weak-side movement, maybe have Dwight Howard set a downscreen for Vince Carter, setting Carter up for a three-pointer he can step right into on the right wing? Have Jameer Nelson duck into the right corner in case the D rotates to Carter quickly enough? Again, options.

Defense is another story. If Bass can learn Van Gundy's rotation, he can be an asset on that end, as his individual defensive metrics rate him as decent. Basketball Prospectus' dMULT, short for Defensive Multiplier, estimates he held his opponents to 91.6% of their normal production last season, for example. Where he suffers is in the team scheme. Once he gets that down, he's fine. He has the athleticism, reach, and strength to compensate for his lack of height. And say what you will about his frequent blown assignments, but you can't knock his effort. Or "energy." "Toughness." "Intensity." Whatever word you want to use. He plays hard, is the idea.

Lewis' outlook isn't quite as good. He can't guard small forwards anymore. He doesn't turn 31 until next week, so it's not like he's creaky, but he's not exactly athletic either. He's much better off staying stationary, guarding power forwards in either the high or the low post, as opposed to chasing small forwards around the perimeter. Given my doubts about his defense at the three, and the lingering questions about Bass' execution of team defense, and it's easy to see why this combination isn't one I believe will be successful.

The other issue here? Bass isn't the backup power forward who needs more minutes. No, that's Ryan Anderson, and as much as I hate getting into this argument, there's no avoiding it here. Last year, Bass did precisely three things better than Anderson: he got more offensive boards (at the expense of getting back on defense, I should add), he blocked more shots, and he turned the ball over slightly less. That's it. Anderson's a better overall rebounder, scorer, passer, and shooter. Anderson's quick trigger from three-point range earned him a spot in Van Gundy's doghouse late in the year, but other than that weakness? Anderson's a rotation player who needs 20 minutes a night. He's younger than Bass, produces more nearly across the board, and does so while keeping the floor spread for Howard. One can make a decent case that Anderson, when he's confident, produces more than Lewis, at roughly one-tenth the cost.

Like I said earlier, you can't blame the Magic for wanting to experiment. With Vander Weide's approval--he was instrumental in convincing team chairman Rich DeVos, his father-in-law, to okay the team's dipping into the luxury tax last summer in the first place--Smith bought a $4 million weapon last year and it appears as though he wants to see Van Gundy deploy it more often. This is a reasonable request. But it seems to me that, given Bass' and Lewis' limitations, the team might be better off using Bass as an undersized, offensively minded center and keeping Lewis at power forward, rather than trying to play them down one position, with either Howard or Marcin Gortat at center. In this arrangement, Lewis is the primary post-up threat, and getting him to post-up more is the entire reason we're having this discussion, I believe. Of course, this unit would get killed on the glass, which is a major drawback.

After more than 1300 words, I'm grasping at straws in trying to tie a nice ribbon on this post so I can go to sleep. I've pored over the numbers and racked my brain for a while and can't come to a satisfactory conclusion. So I invite you to provide your own. The biggest takeaway is that Van Gundy's apparently willing to pair the two in the frontcourt with a center, which he didn't do for any meaningful stretch last year, as I've illustrated with the chart above. Will he follow through on it it? In what situations? And, most importantly, will it work? We have another three months, at least, before we'll even begin to have an idea. If nothing else, teaming Lewis and Bass is worth a look, especially early in the season, when there isn't much at stake. If the lineup works, keep it. If not? Junk it, and try something else.