I don't think there's a more misunderstood player in the entire NBA than Dwight Howard. Neither the fans nor the media give him enough credit for what he does on both ends of the floor, and if this idea sounds familiar, it should: Stan Van Gundy, who's coached Howard's Orlando Magic for the last 3 seasons, talks about it all the time. Howard has won the last two Defensive Player of the Year awards, has led the league in rebounding and shot-blocking in each of the last two seasons, and has led the league in total rebounds in each of the last four seasons, and he's only 24 years old. Media often trot out the "defense wins championships" aphorism, conveniently forgetting that offense is half the game, and no one defends better than Howard. Yet they seem to take his D for granted, and instead focus on his offensive shortcomings. Just last week, Chris Mannix of Sports Illustrated called Howard's offense "pathetic," for instance, despite his averaging 21.8 points per game against the Boston Celtics' duo of Kendrick Perkins and Rasheed Wallace, who cover him about as well as anyone else in the entire league. The issue here is expectation, as I'll illustrate below the fold.

The fact is, Howard was largely lauded for his performance last year, which included selections to the All-Star Team, the All-NBA First Team, and the All-Defensive First Team in addition to his Defensive Player of the Year award. He garnered the same honors this season and posted nearly identical numbers, yet NBA observers like Mannix try to paint him as some sort of disappointment. Sorry, but to me, if you're an elite player by 2008/09 standards, you're an elite player by 2009/10 standards as well. We're not talking about some cross-era paradigmatic shift here. This is just one season. But to hear a lot of people tell it, Howard had a down year.

In truth, he improved. Moderately. His scoring stats are down due largely to his lowest usage rate since the 2006/07 season, which we can almost entirely pin to new arrival Vince Carter's asserting himself in Orlando's offense. But he improved slightly as a rebounder and shot-blocker, and led the NBA in field goal percentage.

But being great isn't good enough, apparently, and I think I've figured out why. Take a look at this Synergy Sports Technology breakdown of his possession usage from the 2008/09 season: 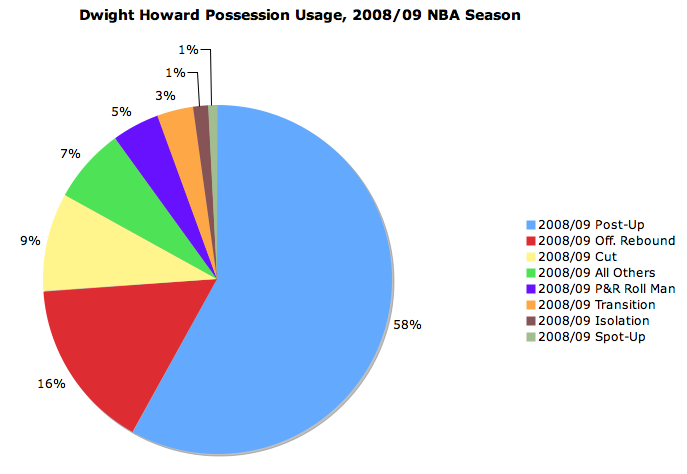 And now this year: 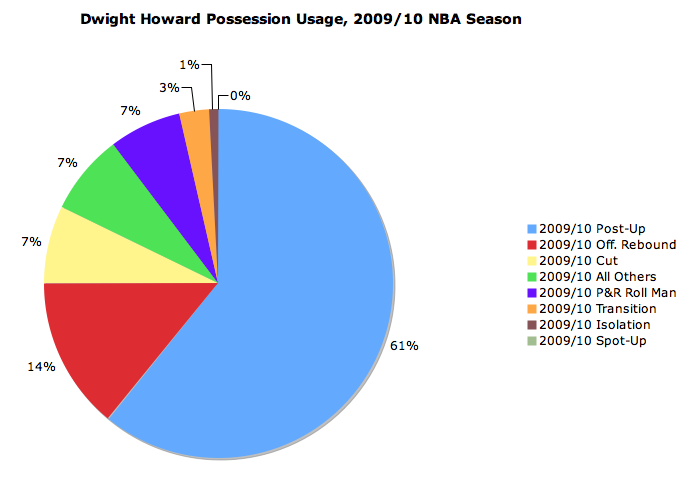 He posted up a bit more, at the expense of cutting to the basket, but that's about the only change.

Now, let's look at his efficiency by play type over the last two seasons. In case it's unclear, the blue bars represent 2008/09, and the red ones represent 2009/10: 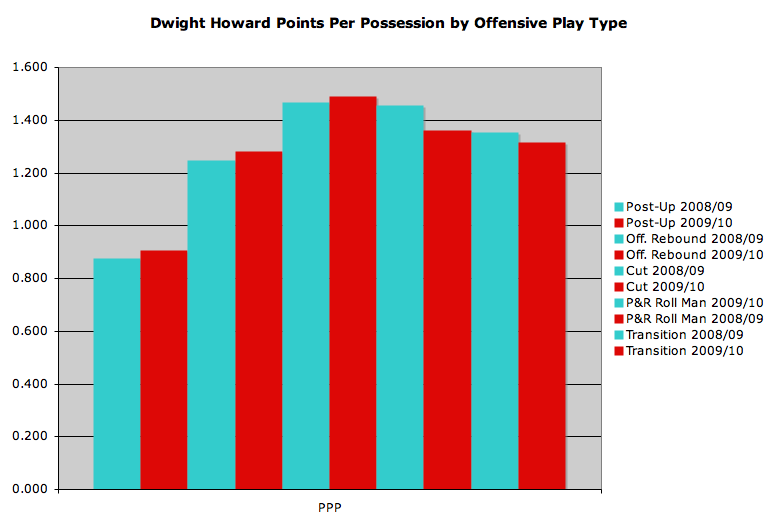 So he improved in the three play types most commonly used, and though he regressed in a few others, he's still well above average. Overall, Howard ranked in the 85th percentile of offensive players in 2008/09, compared to the 90th percentile this season. There is no way to argue that he got worse. None. I guess the commercials he filmed didn't actually affect his game then, right?

But plenty of people, it seems, expect more from Howard. They want him to be a back-to-the-basket nightmare with a zillion and one moves, capable of scoring 25 points a night while still locking down the defensive end. They aren't crazy. Given his age, it's reasonable that he'll one day get there. Where I think they're off is in their belief that he can only become a truly elite if he does that. As it stands, Howard is the best player at his position and, at worst, the 5th-best player in the league. He could make no improvement whatsoever for the next several seasons, maintain that standing, and still be elite.

Now, obviously, it would help Howard if he had more moves down low. To my eyes, his moves are similar, but the improved touch with either hand is what's made him more efficient in the low block. He'd do well to develop some hesitation moves, or pump fakes... anything to make his movements more difficult to time. We've seen guys like Wallace, Perkins, and Shaquille O'Neal, who've each put considerable time and effort into studying Howard, simply wait out his moves, then leap to block or contest his shot at the precise moment they have to. In short, Howard's moves are too easily predicted.

And if you're sitting at home nodding, thinking I just proved your argument right, I'd advise thinking again. Even with the predictable arsenal, Howard's post game ranked 19th in points per possession with players who posted up at least 350 times, according to Synergy, which is more efficient than a list of players that includes O'Neal, Carlos Boozer, Andrew Bogut, and Chris Kaman. And only 7 players' post-ups produced scores more often. We need to rid ourselves of this thinking that Howard is some sort of liability down low, because he isn't. There's certainly room for improvement, but he already stands as one of the league's better post players. And if that's the weakest part of his game, he and the Magic are in excellent shape for years to come. Further, if his work with Hakeem Olajuwon this summer bears fruit, the league's other 29 teams have quite a bit of worrying to do.