The Education of Vince Carter

Share All sharing options for: The Education of Vince Carter

Between his strong play, his team's dominance, and his first appearance in a Conference Finals, Vince Carter is riding high. And really, why wouldn't he be? He reportedly ran around screaming with happiness when informed the Orlando Magic had acquired him from the New Jersey Nets this summer, and 11 months later, he's just 8 wins shy of winning an NBA championship.

How easily we forget, though, just how disastrous that acquisition appeared to be just four months ago, with Carter missing 72.6% of his shots and scoring a point every 3 minutes. Indeed, his January slump led Chad Ford speculate the Magic might trade him for Tracy McGrady's expiring contract, and thus essentially give up on the season. And Henry Abbott, who's not prone to hyperbole, wrote over 1000 words on how poorly Carter played in a single game against the Boston Celtics. "It's hard to remember any player have a worse game," he said. He played so horribly that some NBA fans all over these here innernets began to wonder if the Magic would have been better off with 0-time All-Star Hedo Turkoglu instead.

So how did he turn it around so quickly?

As it turns out, Carter was simply mired in a monstrous slump. And he was playing through nagging injuries to his left ankle and left shoulder, which exacerbated his ineffectiveness. But he's put that January long behind him, and played at an All-Star level from February to the end of the season. He took fewer shots, scored more efficiently, and became a more willing passer. 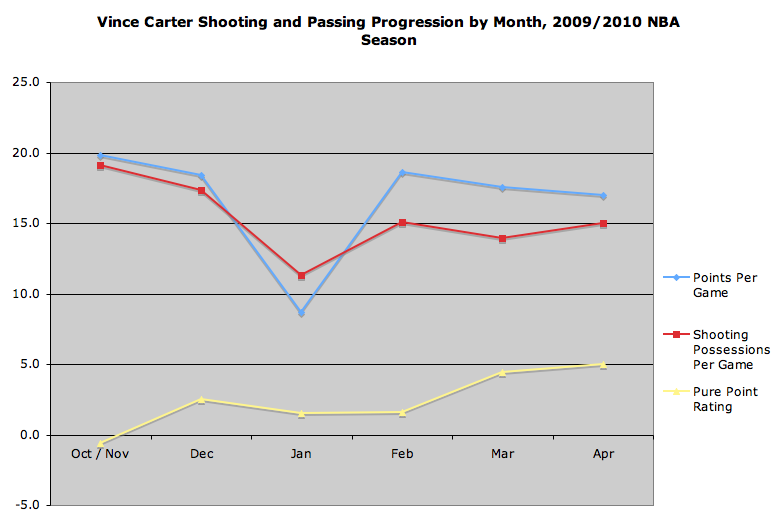 If you're talking points per game, the season's first month was Carter's most productive, with 19.9 average. But there's more to being effective offensively than just putting the ball in the hoop. Efficiency matters, and Carter was lacking in that area, needing 19.1 shooting possessions to score 19.9 points. In December, he took fewer shots, but his scoring was similarly inefficient. We covered January already.

But look at February, March, and April. He began to fully understand his role, as he shot less and scored more efficiently. Moreover, his Pure Point Rating--a measure of passing proficiency which counts a turnover as more harmful than an assist is helpful, and adjust for minutes played--has increased in each of the last four months. January's ho-hum 1.5 figure is in line with the season-long total of Cleveland's Anthony Parker. The 5.0 mark he posted in April would put him in the league's top 15 were he to maintain it for the entire season, and bests those of starting point guards like Raymond Felton, Andre Miller, Devin Harris, and Michael Conley, to name but a few.

The data on the chart thus suggest that a combination of injuries and unfamiliarity with coach Stan Van Gundy's offense worked against Carter in the early season. But now? He gets it, which is good news for Orlando, and decidedly bad for the rest of the league.