Should the Orlando Magic Face the Atlanta Hawks Next, Don't Be Surprised if Ryan Anderson Goes Nova

Share All sharing options for: Should the Orlando Magic Face the Atlanta Hawks Next, Don't Be Surprised if Ryan Anderson Goes Nova

It's common courtesy for professional athletes and coaches to say they don't care who they play in the postseason. There's no reason to stoke a fire in an opponent by saying you'd rather face them, for instance. And I'm sure the Orlando Magic really couldn't care less about the result of the Milwaukee Bucks' series against the Atlanta Hawks. They'll be equally motivated against either foe. But if history is any indication, reserve forward Ryan Anderson would probably prefer the Hawks.

To be clear, I haven't spoken to Anderson about whom the Magic might draw next, and I am not trying to put words into his mouth. Please don't accuse me of anything like that. I just wanted to point out here how [redacted] ridiculous Anderson's been against Atlanta in his two-year career, just so you're prepared if he breaks out in a potential series, though the odds are squarely against the Hawks' advancing. According to John Hollinger, teams in Atlanta's position--which is to say, teams facing a 3-2 deficit despite being the higher seed--only take the series 37% of the time.

To illustrate how much he improves his game when he plays the Hawks, I pitted his statistics from Atlanta games against those of the league's other 29 teams. The results are pretty jarring. Take a look at his shooting percentages, for instance: 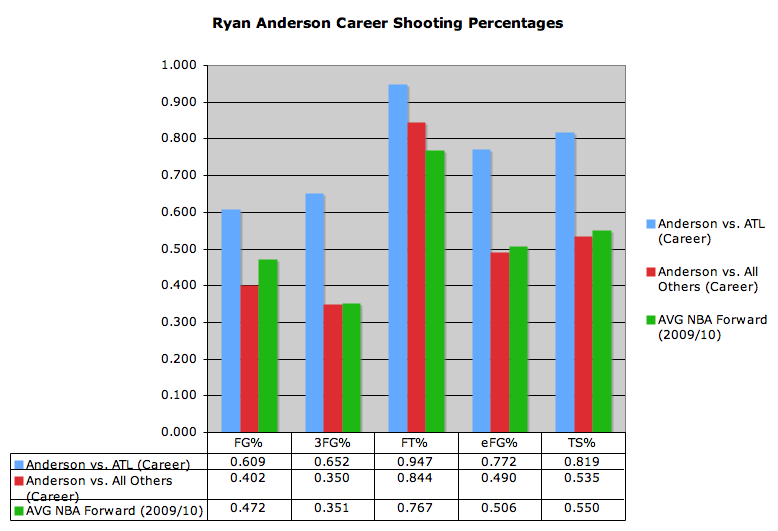 Against all other teams, he's slightly below positional average in terms of scoring efficiency, with a True Shooting percentage of 53.5% compared to the average forward's 55.0% mark. But against Atlanta? 81.9% True Shooting, boosted by a scorching 65.2% mark from beyond the arc. For the uninitiated, True Shooting is equal to one-half points produced per shooting possessions used; think of it as a much more accurate way of saying "points per shot," because it accounts for free throws. For comparison's sake, Denver Nuggets center Nenê led the league this year with a 63.0% True Shooting figure. Anderson bests that by a wide margin.

Here's a split look at his per-36-minute scoring and rebounding: 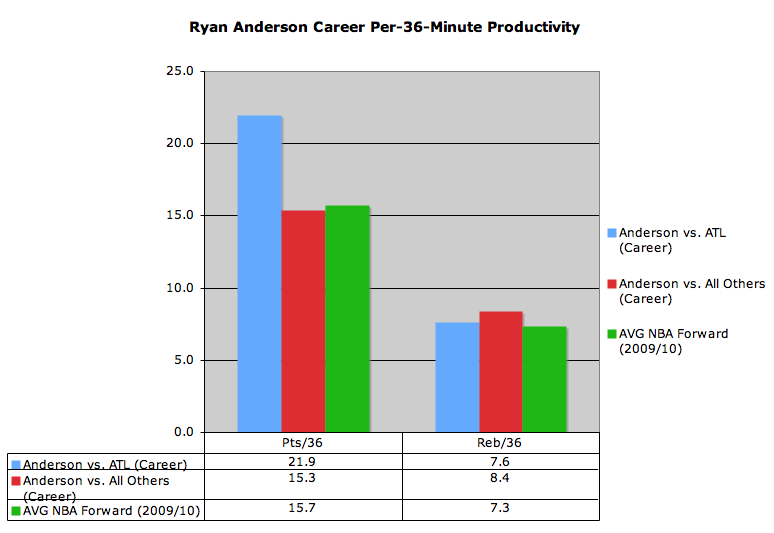 By way of comparison, Dirk Nowitzki's per-36-minute stats of 24.0 points and 7.3 boards are roughly in line with what Anderson's done against the Hawks in his career. Nowitzki's a 9-time All-Star, former league MVP, and a future Hall of Famer.

It's worth noting that Anderson's stats against the Hawks aren't bolstered by one great game amidst scads of mediocre ones. Just twice in 7 games has he failed to reach 15 points, and he has three games of going 3-of-3 from three-point range.

And another thing I noticed: Anderson's aggression really comes out against the Hawks. Because he's taken a little more than half of his shots from beyond the arc in his career, we tend to regard him as a three-point specialist, which isn't exactly fair. His versatility is on display against Atlanta, with stronger drives resulting in 0.413 free throw attempts per every field goal attempt. Against the rest of the league? 0.239 foul shots per field goal attempt.

Orlando took 3 of its 4 games against Atlanta this season, only losing the most recent meeting at the buzzer, when Josh Smith broke an 84-all tie by dunking home a missed Joe Johnson offering. Anderson didn't play that night, as coach Stan Van Gundy used Brandon Bass instead. He regretted the move, as he explained after the Magic's next game, a win against Minnesota in which Anderson scored 19 points in 24 minutes while Bass recorded a Did Not Play-Coach's Decision. Said Van Gundy:

"I was sort of kicking myself the other night after the Atlanta game because he’s had good practices lately. He’s played well against Atlanta all year and because of his ability to spread the floor – both those teams Atlanta and then tonight, he had a big game up there last time."

So all signs point toward Anderson getting the call against Atlanta in the unlikely event it wins Games 6 and 7 of its series against Milwaukee. And those same signs also point toward his having a productive series, and playing a key role in keeping the floor spread at all times.