By the Numbers: Dwight Howard's Defensive Player of the Year Credentials

Share All sharing options for: By the Numbers: Dwight Howard's Defensive Player of the Year Credentials

Yesterday, Dwight Howard of the Orlando Magic took home his second straight Defensive Player of the Year award, becoming the seventh player to win the award in consecutive seasons. I didn't make a big news post out of Howard's win, but rather included it in a routine, daily news post, which sort of attests to the extent to which I expected him to win this award. And to keep winning it, honestly.

But I'd like to avoid taking Howard for granted, so I thought I'd compile some stats, facts, and other errata to highlight how fantastic he's been on D this year.

Now, I suppose one could try to argue that these stats are hollow, but that's just it: they're not. Orlando's the league's third-best defensive team this season, and Howard, Matt Barnes, Marcin Gortat, and Mickael Pietrus are the only above-average defenders in its rotation. Further, Orlando allows just 24.2 shot attempts at the rim each game (5th best), and holds its opponents to 57.4% shooting there (2nd best). When he's on the court, Magic opponents score just 1.0268 points per possession. When he's on the bench, that figure improves to 1.0605. In so many ways, he's the key to one of the league's best overall defenses.

Perhaps Chris Mannix of Sports Illustrated put it most simply: Howard leads the league in rebounding and shot-blocking for a team that holds its opponents to a league-worst 43.8% shooting. Those stats aren't incidental. He won the award balloting in the landslide, but did not appear on 2 of the 122 ballots cast, which stuns Mannix. And really, it stuns me too.

But how lopsided was the voting in Howard's favor? Let's look. 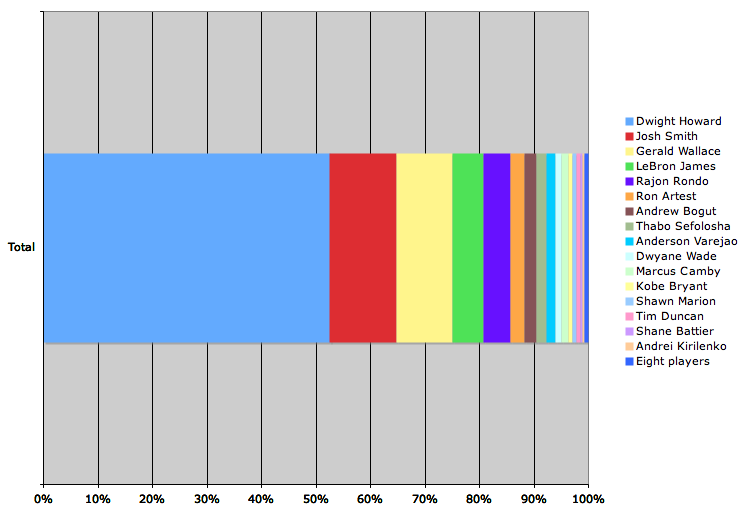 Howard received more than half of the total points awarded; players earn 5 points for a first-place, vote, 3 for a second, and 1 for a third. The strength of 110 first-place votes on 122 ballots really drove him here. This graphic really ought to show you just how far back the field was.

Here's another way of looking at the voting. This chart gives you an idea of how many ballots on which each player appeared, and for which place they received votes. To avoid clutter, I omitted the 8 players who received just 1 third-place vote each, a list which includes Barnes. 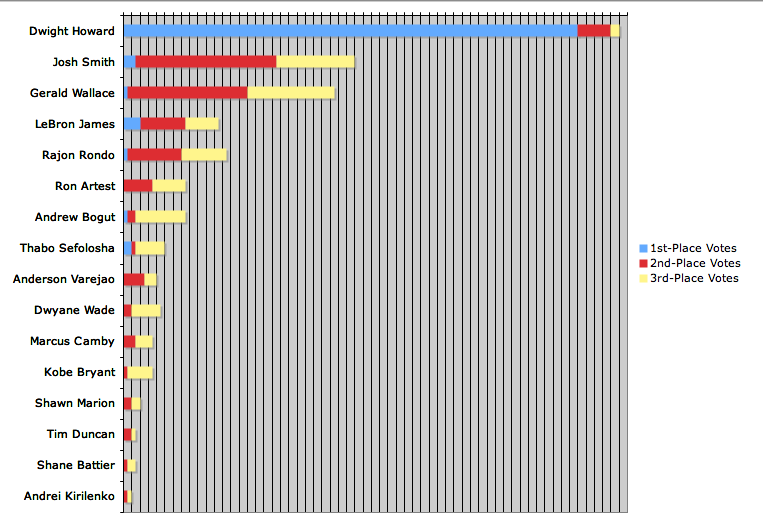 Yeah, Howard dominated the Defensive Player of the Year voting about as much as he dominated that end of the floor that year. It's a positive sign that there was very little reasonable debate about his merits. And really, given how utterly daffy some of the people who vote on these awards are, it's reassuring that only two omitted him from their ballots entirely.