82 games later, the playoffs have arrived for the Orlando Magic, and they're all set to face the Charlotte Bobcats, who are making the first postseason appearance in franchise history. I thought I'd take a brief look back at the season-series between these two teams to see what it might tell us about the forthcoming Quarterfinals series.

First, some caveats. Though the Magic and Bobcats played each other four times, it's unclear what bearing those meetings will have on the postseason.

In short, one can make a case that none of the four meetings is representative of what we'll see when the Quarterfinals kick off this Sunday at 5:30 PM, but I do think the head-to-head numbers are worth taking a look at.

I looked at offensive rating and the four factors first. Any defensive metric you can find will tell you that these two teams are among the league's elite on that side of the floor, so I wanted to see how their offenses fared against one another in the regular season. So here's how that chart looks: 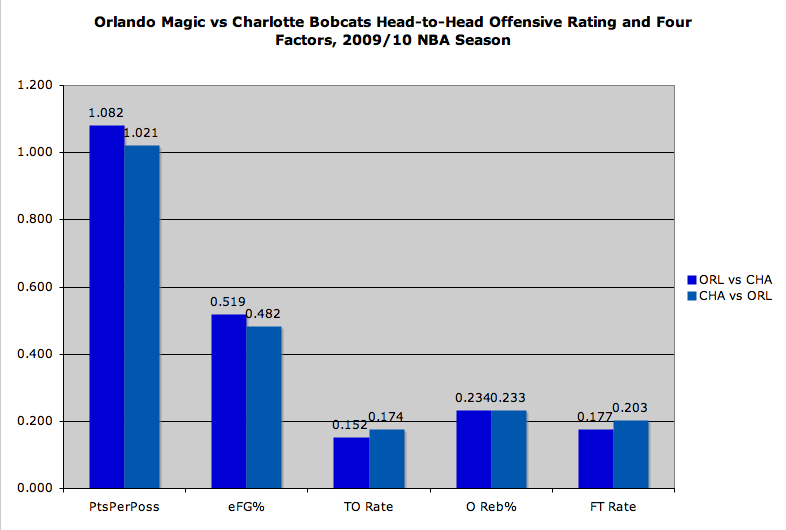 What stands out here is how similar these teams are, in terms of strengths and weaknesses, against one another. Neither team rebounded particularly well or took care of the ball, though the Bobcats fared decisively worse than Orlando in the latter category. And the Magic, who are among the league's best teams at getting to the foul line almost exclusively due to Dwight Howard, look pretty awful in that category here. The problem in the regular season wasn't so much getting there as it was making the foul shots once there; FT rate measures made foul shots per field goals attempted, and Orlando shot a dismal 56-of-88 (63.6%) from the stripe against Charlotte this season. I'm tempted to say that number is flukily low, and we should count on the Magic to deliver at the foul line in this series.

Now, here's a look at how the teams selected their shots against one another this season. Yup, this one's an eye-opener: 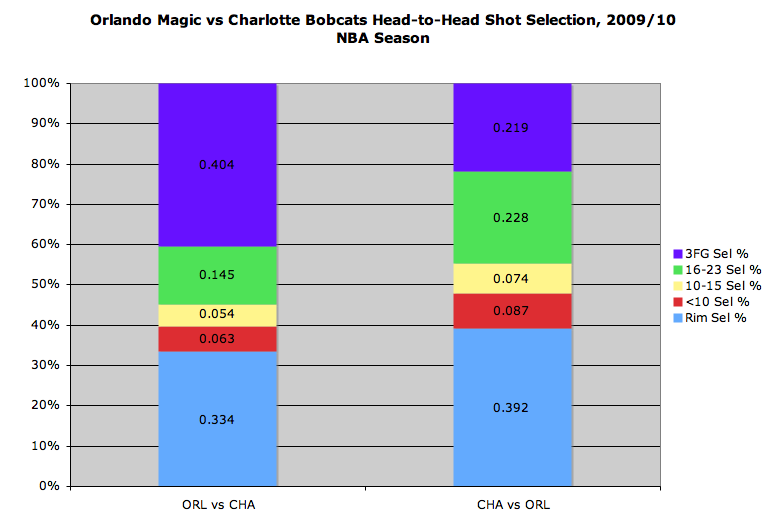 Indeed, three-pointers comprise a shade more than 40% of the Magic's shot attempts against the Bobcats this season. Put another way, they averaged 32 three-point attempts per game against the Bobcats, compared to a season-long average of 27.4 per game, which led the league. Shooting the three plays into Charlotte's strategy; it yields a league-high 20.7 triple-tries per game, while limiting teams to the second-lowest percentage in the league. Larry Brown has his team playing smart on D, as it forces its opponents to take shots that it defends well.

There's a trap here, though. The three-pointer is, historically, the league's most efficient shot that isn't a layup or dunk. The Bobcats tend to get away with letting people shoot it because they're confident in their ability to guard that shot. But against Orlando? With guys with hair-trigger releases like Jason Williams, J.J. Redick, Ryan Anderson, and Mickael Pietrus? That's what one might call playing with fire.

On the other side, the Bobcats take a ton of long two-pointers, which is just fine with the Magic, who know it's the worst shot in the game. There are several reasons why the Bobcats are among the league's least efficient offensive teams, and one is that they rely a bit too heavily on that shot. Gerald Wallace, their All-Star and franchise cornerstone, jacks 2.3 per game at 30%, the lowest percentage of any swingman playing at least 30 minutes per game this season. Stephen Jackson, their leading scorer at 21.3 points per game, shoots 4.5 of those per game at a more respectable, but still below positional average, 38.0%. If the Magic can keep prodding the Bobcats into pulling up from 20 feet, they'll win this series easily.

But then again, Charlotte hasn't been shy about challenging Howard, the likely Defensive Player of the Year. They haven't been shy about attacking anyone, actually, ranking 3rd in shot attempts at the rim this season. The problem? They're 26th in percentage, largely because Wallace gets rejected a lot more often than a player with his size and athleticism should.

What both these charts tell us, really, is that we're in for a defensive struggle. Any series in which the Bobcats are involved would test their mediocre offense, but we should also acknowledge that Charlotte is capable of locking down Orlando's offense itself. I don't doubt that Ratliff, Nazr Mohammed, DeSagana Diop, and Tyson Chandler will hold their own against Howard in the post. Jackson and Wallace are solid perimeter defenders as well and will make life difficult for Rashard Lewis and Vince Carter. I mean, we could see at least one game with an 80-77 final, in which the winning team shoots 37% and turns the ball over 16 times in a low-possession game. It won't always be pretty, really.

But I do think that great offense beats great defense over the course of a seven-game series, and Orlando is the lone team in this series that boasts a great offense. The Bobcats' defense is strong enough to win a game or two by itself, and if Jackson catches fire at the other end, Orlando will really have its hands full. But in the end, I'm with the anonymous Magic players whom Brian Schmitz of the Orlando Sentinel surveyed a few days ago: I'm confident that Orlando will win this series, but I won't be surprised if it needs 6 games to do so. Charlotte's pesky, talented, and well-coached.