Orlando Magic Are Peaking at the Right Time, For Whatever That's Worth

Share All sharing options for: Orlando Magic Are Peaking at the Right Time, For Whatever That's Worth

In professional sports, the phrase "peaking at the right time" refers to a team that's performing its best just before the postseason begins. While I'm not sure that "peaking at the right time" necessarily matters in the long run--last year's Orlando Magic team, for instance, fell apart in the last few weeks of the regular season due to injuries, and wound up winning its conference--I thought it pertinent to examine that term as it relates to this year's Magic team.

Based on their overall record and their 12-2 showing in March, to say the Magic are playing at their best is to state the obvious. But let's go ahead and take a quick graphical look at how their season has progressed. 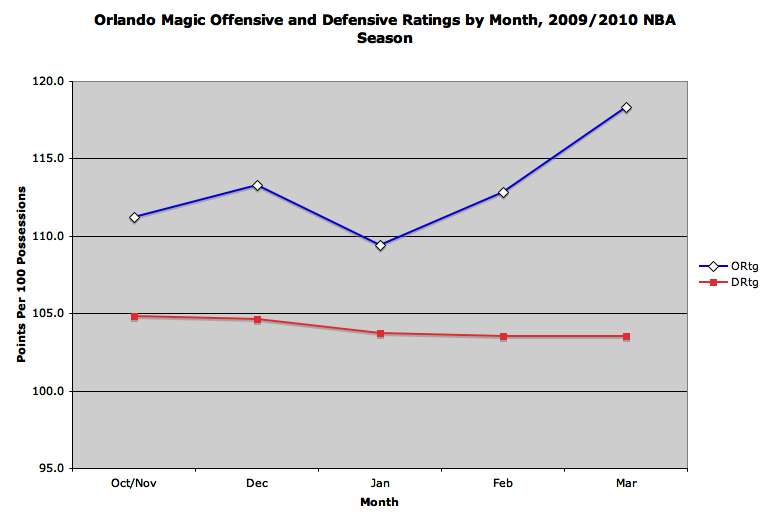 Yup, the defense has improved, little by little, each month this season. And the offense had never been better than it was last month, which is remarkable because in January it was pretty hideous, posting a pedestrian offensive rating of 109.4. But since then, both Jameer Nelson and Vince Carter have played more to their ability--and Carter, who shot 28.4% in January, could hardly have gotten worse--and Dwight Howard has asserted himself on offense. Matt Barnes seems to have found his three-point stroke as well, connecting on 46.2% of his treys since the calendar turned to February. As a result of those gradual improvements, Orlando cruised through March, with an average margin of +13.1 points per game and an efficiency differential of +14.8.

So yes, the Magic are indeed peaking, even if the timing isn't necessarily important. What's important here is the considerable height of that peak. It's easy to see why basketball-reference and ESPN's John Hollinger give the Magic a better than one-in-five shot to win the title this season.