Fun with Google Motion and Its Application to the Orlando Magic

Share All sharing options for: Fun with Google Motion and Its Application to the Orlando Magic

If you haven't visited Hoopdata.com lately, you're missing out on a ton of goodies the site has been sharing with the public the last few weeks or so. I'm not exaggerating when I state that Hoopdata is the go-to source, along with Basketball-Reference and a few other resources, for NBA statistics and analysis. You'd be hard-pressed to find another outlet that provides some of the information Hoopdata does, like a Google Motion chart "filled with statistics to help you spot trends among the game's active players and across the league as a whole. Packaged fully customizable and animated for your pleasure." 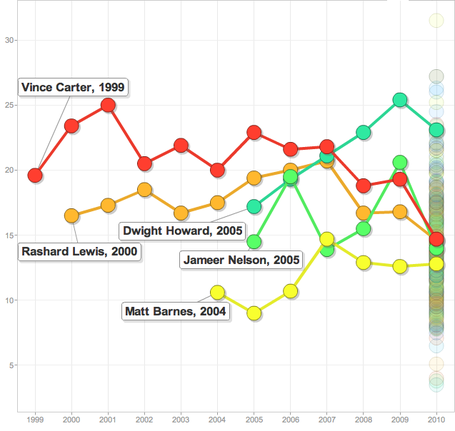 For example, I plotted PER vs. Time to come up with a graph that shows the progression of the starters on the Orlando Magic based on their respective PER's. I'll be quick to note that PER is not a be-all and end-all statistic to evaluate players, it's just a piece of the puzzle and nothing more. But with that said, there's a few things that jump out when looking at this chart. For instance, the PER's of Vince Carter, Dwight Howard, and Rashard Lewis converge very closely together in 2007 before each player's career takes a different turn.

According to the numbers, Carter and Lewis have been trending downward in a similar manner while Howard has been getting better (even though he's seeing a small dip in his PER this season). For Carter and Lewis, part of the explanation for their precipitous declines is simply due to an evolution in their roles. The decrease in the usage rates of both players the past few years is one example of that change. There are other factors, of course, but it's intriguing that Carter and Lewis respective careers mirror each other quite a bit.

Jameer Nelson's career arc has been interesting, too. Nelson has shown that, when healthy and at his best, he's an All-Star caliber player. But at the same time, Nelson has had to battle bouts of inconsistency.

So, I'll open things up for discussion. When you look at the chart, what stands out to you the most?

Here's a link to create a Google Motion chart, by the way, to conduct your own analysis. Familiarize yourself with the axes, color gradient, and size. You can use different variables to come up with a variety of comparisons, which makes the possibilities endless.